Nostradamus & The Shift Of Ages. Timeship Earth 2013 - Book of the Cube (43/52) 2012, Time Travel and the Philadelphia Experiment. * Visit in5D Connection where you can find your soul mate or join one of our amazing groups. 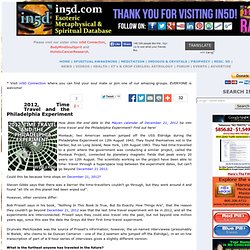 EVERYONE is welcome! How does the end date to the Mayan calendar of December 21, 2012 tie into time travel and the Philadelphia Experiment? Find out here! Montauk; two American seamen jumped off the USS Eldridge during the Philadelphia Experiment on 12th August 1943. They found themselves not in the harbor, but on Long Island, New York, 12th August 1983. Could this be because time stops on December 21, 2012? Steven Gibbs says that there was a barrier the time-travellers couldn't go through, but they went around it and found "all life on this planet had been wiped out". However, other versions differ: Bob Frissell says in his book, "Nothing In This Book Is True, But Its Exactly How Things Are", that the reason they couldn't go beyond December 21, 2012 was that the last time travel experiment will be in 2012, and all the experiments are interconnected.

So everything is locked in until 10.000AD? Yes. A Scientific Blueprint for Ascension by David Wilcock as told to Wynn Free. Our origin and evolution Many sources, including Ra (see companion Ra article), Edgar Cayce, and others, say that the Oneness essentially got bored or lonely. 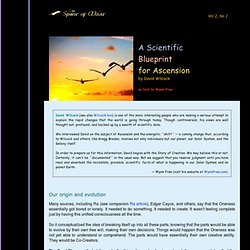 It needed to do something. It needed to create. It wasn't feeling complete just by having this unified consciousness all the time. So it conceptualized the idea of breaking Itself up into all these parts, knowing that the parts would be able to evolve by their own free will, making their own decisions. The Great Plan was that at the end, after this entire cycle of universal evolution was complete, all of the parts that had evolved on their own would independently recognize their God Consciousness, renounce separation, embrace unity, and return to the totality of Oneness.

So God is evolving, and not some static Being that just sits there and waits for everybody to catch up. Galaxies were the first Beings My understanding is that God's first manifestations of separate beings are what we call galaxies. Conscious Creation. Wholly Science combines the remarkable findings of Modern Science with the profound wisdom of Ancient Science. 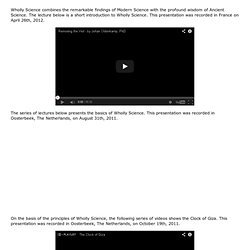 The lecture below is a short introduction to Wholly Science. This presentation was recorded in France on April 26th, 2012. The series of lectures below presents the basics of Wholly Science. This presentation was recorded in , The Netherlands, on August 31th, 2011. Banking Collapse Announces the Beginning of The Golden Age. What Happens To Us Physically During Ascension 02 (please read descriptions carefully) - NAPISY PL. Humans Are Free. 2012 and The Ascension - From Cosmic Awareness Channeled Readings. What to Expect on December 21, 2012 - The Moment of Ascension (More on Earth’s Rotation and the Days of Darkness) Will our planet experience a reversal of its directions as to its rotation in the coming years? 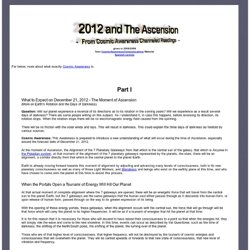 Will we experience as a result several days of darkness? There are some people writing on this subject. As I understand it, in case this happens, before reversing its direction, its rotation stops. There will be no friction with the solar winds and rays. This Awareness is prepared to introduce a new understanding of what will occur during the time of Ascension, especially around the forecast date of December 21, 2012. Earth is already moving forward towards this moment of alignment by adjusting and advancing many levels of consciousness, both in its own planetary consciousness as well as many of those , and and beings who exist on the earthly plane at this time, and who have chosen to come onto the planet at this time to assist this process.

</i>*} There will be a buildup to this. Alan talks to Cobra about the Spiritual Liberation of Earth (audio) Alan Steinfeld of New Realities talks to Cobra, a code name for a freedom fighter contactee from the Pleidians working for the liberation of the light forces on planet Earth... 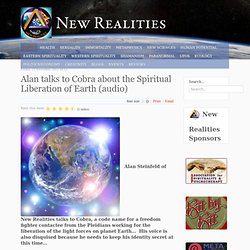 His voice is also disquised because he needs to keep his identity secret at this time... Part 1 - Cobra talk about how "Our reality is about to shift and changes will affect everybody. " This interview is about the ultimate preparation for this extraordinary time. For more about Cobra go to: Part 2- is an interview Deborah Peitsch and some of her energetic downloads of higher frequencies for the planetary ascension. Cobra's talks and conferences includes: Quarantine Earth and Archon Forces of Light and forces of darkness Resistance Movement New financial system *New advanced technologies *Galactic superwave.

Edgar Cayce on the Book of Revelation. By Kevin Williams Through Cayce's otherworldly journeys, he learned the true interpretation of the Bible. 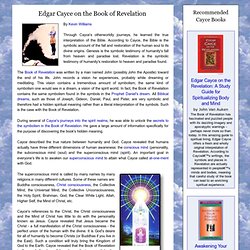