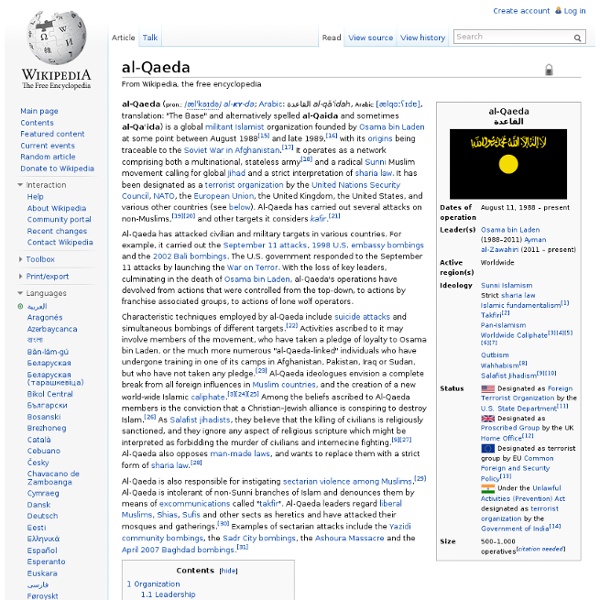 Al-Qaeda around the world. Al-Qaeda (/ælˈkaɪdə/ al-KY-də; Arabic: القاعدة‎ al-qāʿidah, Arabic: [ælqɑːʕɪdɐ], translation: "The Base" and alternatively spelled al-Qaida and sometimes al-Qa'ida) is a global militant Islamist and takfiri organization founded by Abdullah Yusuf Azzam and Osama bin Laden in Peshawar, Pakistan,[22] at some point between August 1988[23] and late 1989,[24] with its origins being traceable to the Soviet War in Afghanistan.[25] It operates as a network comprising both a multinational, stateless army[26] and a radical Sunni Muslim movement calling for global Jihad and a strict interpretation of sharia law. It has been designated as a terrorist organization by the United Nations Security Council, NATO, the European Union, the United Kingdom, the United States, India and various other countries (see below). Organization Al-Qaeda's management philosophy has been described as "centralization of decision and decentralization of execution Leadership Command structure Strategy

Al-Qaeda | Mapping Militant Organizations Narrative Summary Al-Qaeda (AQ) is one of the longest-operating jihadist militant organizations in the Middle East and Asia, with followers and support around the world. Founded by Osama bin Laden on August 11, 1988 after nearly a decade of training and organization against Soviet invasion into Afghanistan, al-Qaeda has carried out some of the most violent and brutal attacks in the last 25 years. AQ was founded around the individual ideologies of bin Laden, with minimal foreign influence permeating his command of the organization as it has grown into a global entity seeking to rid the Muslim world of foreign influence and establish a Shariah-based Islamic government. AQ was initially comprised of Afghan mujahideen fighting against Soviet influence in Afghanistan from the late 1970s through the 1980s. Leadership Ideology & Goals Islamist Sunni Name Changes Size Estimates The size estimates for core al-Qaeda members are relatively low. Designated/Listed Resources External Influences Major Attacks

Hijackers in the September 11 attacks The hijackers in the September 11 attacks were 19 men affiliated with al-Qaeda, and 15 of the 19 were citizens of Saudi Arabia. The others were from the UAE (2), Egypt and Lebanon. The hijackers were organized into four teams, each led by a pilot-trained hijacker with four "muscle hijackers" who were trained to help subdue the pilots, passengers, and crew. The first hijackers to arrive in the United States were Khalid al-Mihdhar and Nawaf al-Hazmi, who settled in the San Diego area in January 2000. Background[edit] Selection[edit] Khalid al-Mihdhar and Nawaf al-Hazmi were both experienced and respected jihadists in the eyes of al-Qaeda leader, Osama bin Laden. As for the pilots who would go on to participate in the attacks, three of them were original members of the Hamburg cell (Mohammed Atta, Marwan al-Shehhi and Ziad Jarrah). "Muscle" hijackers[edit] Mihdhar and Hazmi were also potential pilot hijackers, but did not do well in their initial pilot lessons in San Diego. Attacks[edit]

al-Qaeda in Iraq Origins[edit] The group was founded by the Jordanian militant Abu Musab al-Zarqawi in 1999 under the name Jama'at al-Tawhid wal-Jihad (Arabic: جماعة التوحيد والجهاد, "Group of Monotheism and Jihad"). The group is believed to have started bomb attacks in Iraq as of August 2003, five months after the coalition invasion and occupation of Iraq, targeting UN representatives, Iraqi Shiite institutions, the Jordanian embassy, provisional Iraqi government institutions. After it pledged allegiance to Osama bin Laden's al-Qaeda network in October 2004, its official name became Tanzim Qaidat al-Jihad fi Bilad al-Rafidayn.[1][5][6][7] Leadership[edit] On 7 June 2006, the leader of AQI, al-Zarqawi, and his spiritual adviser Sheik Abd-Al-Rahman, were both killed by a U.S. airstrike with two 500 lb (230 kg) bombs on a safe house near Baqubah. Purpose[edit] In a letter to al-Zarqawi in July 2005, Al-Qaeda's Ayman al-Zawahiri outlined a four-stage plan beginning with taking control of Iraq. 2004[edit]

Al-Qa‘ida - Terrorist Groups Al-Qa‘ida Established by Usama Bin Ladin in 1988 with Arabs who fought in Afghanistan against the Soviet Union, al-Qa‘ida’s declared goal is the establishment of a pan-Islamic caliphate throughout the Muslim world. Toward this end, al-Qa‘ida seeks to unite Muslims to fight the West, especially the United States, as a means of overthrowing Muslim regimes al-Qa‘ida deems “apostate,” expelling Western influence from Muslim countries, and defeating Israel. On 11 September 2001, 19 al-Qa‘ida suicide attackers hijacked and crashed four US commercial jets—two into the World Trade Center in New York City, one into the Pentagon near Washington, D.C., and a fourth into a field in Shanksville,Pennsylvania— leaving nearly 3,000 people dead. In 2005, Ayman al-Zawahiri, then Bin Ladin’s deputy and now the leader of al-Qa‘ida, publicly claimed al-Qa‘ida’s involvement in the 7 July 2005 bus bombings in the United Kingdom.

Markup language Examples are typesetting instructions such as those found in troff, TeX and LaTeX, or structural markers such as XML tags. Markup instructs the software displaying the text to carry out appropriate actions, but is omitted from the version of the text that is displayed to users. Some markup languages, such as HTML, have pre-defined presentation semantics, meaning that their specification prescribes how the structured data are to be presented; others, such as XML, do not. A widely used markup language is the HyperText Markup Language (HTML), one of the document formats of the World Wide Web. HTML, which is an instance of SGML (though, strictly, it does not comply with all the rules of SGML), follows many of the markup conventions used in the publishing industry in the communication of printed work between authors, editors, and printers.[citation needed] Types[edit] There are three general categories of electronic markup:[1][2] Presentational markup Procedural markup Descriptive markup TeX[edit]

Briefing on the Country Reports on Terrorism 2011 MR. VENTRELL: Okay. Good afternoon, everyone. We have with us today Ambassador Dan Benjamin, the State Department’s Coordinator for Counterterrorism. AMBASSADOR BENJAMIN: All right. Of course, 2011 was an extremely significant year in counterterrorism. At the same time, I should underscore we have no illusions that the transition process that we are in the midst of will be painless or happen quickly. The report also notes that al-Qaida and its affiliates are not the only terrorist threat that the United States faces. Let me make a few points about the statistical annex, which is at the end of the report and which was prepared by the National Counterterrorism Center. Africa experienced 978 attacks in 2011, an 11.5 percent increase over the previous year. Well, let me end these brief remarks by noting that as a result of international pressure and events such as the Arab Awakening, both al-Qaida the organization and al-Qaida the idea are evolving. QUESTION: Two questions if I may. MR.

NATO Coordinates: The North Atlantic Treaty Organization (NATO; /ˈneɪtoʊ/ NAY-toh; French: Organisation du traité de l'Atlantique Nord (OTAN)), also called the (North) Atlantic Alliance, is an intergovernmental military alliance based on the North Atlantic Treaty which was signed on 4 April 1949. The organization constitutes a system of collective defence whereby its member states agree to mutual defense in response to an attack by any external party. NATO's headquarters are in Brussels, Belgium, one of the 28 member states across North America and Europe, the newest of which, Albania and Croatia, joined in April 2009. An additional 22 countries participate in NATO's Partnership for Peace program, with 15 other countries involved in institutionalized dialogue programmes. History Beginnings The North Atlantic Treaty was signed in Washington, D.C., on 4 April 1949 and was ratified by the United States that August. Cold War French withdrawal Détente and escalation

M-Lab | Welcome to Measurement Lab International Security Assistance Force ISAF was initially charged with securing Kabul and surrounding areas from the Taliban, al Qaeda and factional warlords, so as to allow for the establishment of the Afghan Transitional Administration headed by Hamid Karzai.[3] In October 2003, the UN Security Council authorized the expansion of the ISAF mission throughout Afghanistan,[4] and ISAF subsequently expanded the mission in four main stages over the whole of the country.[5] From 2006 to 2011, ISAF had been involved in increasingly more intensive combat operations in southern and eastern Afghanistan. Troop contributors include from the United States, United Kingdom, NATO member states and a number of other countries. The intensity of the combat faced by contributing nations varies greatly, with the United States sustaining the largest numbers of casualties in intensive combat operations, but with other contributors, especially the United Kingdom, Canada, and Denmark, sustaining relatively higher rates of casualties. History[edit]

Brutalist architecture Brutalist architecture is a style of architecture that flourished from the 1950s to the mid-1970s, spawned from the modernist architectural movement. Brutalism rapidly became popular with governments and institutions around the world, with numerous high style examples located in Britain, France, Germany, Japan, United States, Canada, Brazil, and Australia. Examples are typically large buildings, massive in character, fortresslike, with a predominance of exposed concrete construction. History[edit] The term "brutalism" was originally coined by the Swedish architect Hans Asplund to describe Villa Göth in Uppsala, designed in 1949 by his contemporaries Bengt Edman and Lennart Holm. Combined with the socially progressive intentions behind Brutalist streets in the sky housings such as Corbusier's Unité, Brutalism was promoted as a positive option for forward-moving, modern urban housing. Characteristics[edit] Figures[edit] On university campuses[edit] Criticism and reception[edit] Gallery[edit]

Pulling the Teeth of the Tiger | Pundit Extracting information on military operations in Afghanistan from the New Zealand Defence Force is difficult at the best of times. The Christmas Eve NZSAS raid on the business premises of the Afghan Tiger Group in Kabul last year was not one of NZDF’s best times... The so-called “combined forces” Christmas raid on the head quarters of the Kabul company that supplies vehicles to the U.S. military seems to have been a messy operation from start to finish. International Security Assistance Force headquarters received credible intelligence that a bomb attack on the U.S. The Afghan Crisis Response Unit being mentored by our SAS was called out, and the Kabul police were alerted. Here in New Zealand, we remained blissfully ignorant of the whole schermozzle – until Jon Stephenson stirred the pot last May with his Metro article “Eyes Wide Shut”. What Jones did not mention was the uproar that the shooting of civilians in the raid caused in Kabul.

Microsoft's 'Child Of The 90s' Internet Explorer Ad Is A Nostalgic Trip Back In Time Microsoft has released a new advert for Internet Explorer which might just make you cry - if you were born between 1984 and 1988, have a taste for nostalgia and turn the music up really loud. And now the web is 25 years old it seems as good a time as any to revisit what made it great in the first place. The 'Child Of The 90s' ad takes a trip back through everything that was popular back in the land before iPods, including Pogs, bad haircuts and, well, Internet Explorer. The point is that you grew up, and so did they. But the effect for the right audience - including yours truly - is just to make you a bit weepy for a lost time when the internet made weird noises when connecting and Rage Against The Machine were still making albums. Take a look, above. Loading Slideshow Underwater BombWe're assuming that this guy was attempting to take an underwater selfie. UPDATE: This post was originally published in January 2013, when the advert was new.

New Zealand Special Air Service The New Zealand Special Air Service, abbreviated as the NZSAS, was formed on 7 July 1955 and is the special forces unit of the New Zealand Army, closely modelled on the British Special Air Service (SAS). It traces its origins to the Second World War and the famous Long Range Desert Group that a number of New Zealanders served with. The NZSAS was accorded Regimental status in 2013 and presently has the responsibility of conducting domestic Counter-Terrorism operations, overseas Special Operations missions and performing the disposal of chemical, biological, radioactive and improvised explosive devices for both the military and civilian authorities. History[edit] The NZSAS can trace its roots back to the famous Long Range Desert Group, a British/Commonwealth army unit which fought in the North African desert in World War II. The NZSAS were granted the Freedom of the Borough of Thames on 27 September 1967.[8] Unit Location[edit] Unit Designation[edit] Dress Distinctions[edit] Thailand 1962[edit]