Australia Quiz. Dust Echoes. Bringing them home - Frequently asked questions about the National Inquiry. Following the National Inquiry into the Separation of Aboriginal and Torres Strait Islander Children from Their Families and the release of the report Bringing them home several questions have been frequently asked and statements made about the Inquiry’s findings and recommendations. 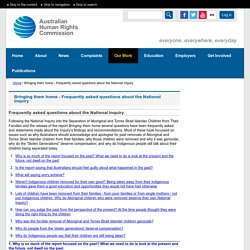 Most of these have focussed on issues such as why Australians should acknowledge and apologise for past removals of Aboriginal and Torres Strait Islander children from their families; why those children were removed and why it was genocide; why do the "Stolen Generations" deserve compensation; and why do Indigenous people still talk about their children being separated today. 1.

Why is so much of the report focused on the past? What we need to do is look at the present and the future, not dwell on the past. The National Inquirys first term of reference, as outlined by the Attorney-General in May 1995, required the Australian Human Rights Commission to: It never goes away. Why me, why was I taken? 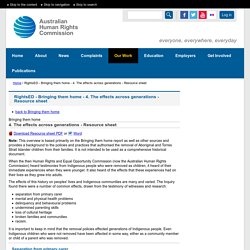 It is not intended to be used as a comprehensive historical document. When the then Human Rights and Equal Opportunity Commission (now the Australian Human Rights Commission) heard testimonies from Indigenous people who were removed as children, it heard of their immediate experiences when they were younger. It also heard of the effects that these experiences had on their lives as they grew into adults. The effects of this history on peoples' lives and Indigenous communities are many and varied. It is important to keep in mind that the removal policies effected generations of Indigenous people. Separation from primary carer Mental and physical health Drug use. 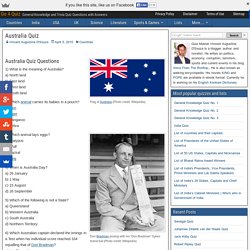 A) North land b) East land c) West land d) South land 2) Which animal carries its babies in a pouch? A) Lion b) Tiger c) Kangaroo d) Zebra Don Bradman posing with his “Don Bradman” Sykes brand bat (Photo credit: Wikipedia) 3) Which animal lays eggs? 4) When is Australia Day? 5) Which of the following is not a State? 6) Which Australian captain declared the innings in a Test when his individual score reached 334 equalling that of Don Bradman? 7) What is Don Bradman’s Test batting average? Paul Keating in 2007. A guide to Australia’s Stolen Generations - Creative Spirits. Detail of the ‘Great Australian Clock’, Queen Victoria Building, Sydney. 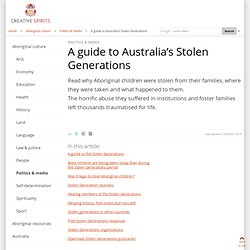 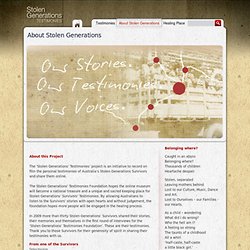 Related:  Importance of Country and Place to Aboriginal People   -  Indigenous Australians   -  Down under   -  Education   -  Enterprise