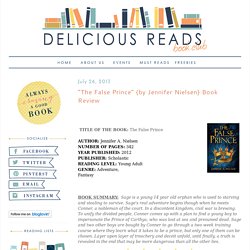 Nielsen NUMBER OF PAGES: 342YEAR PUBLISHED: 2012PUBLISHER: ScholasticREADING LEVEL: Young AdultGENRE: Adventure, Fantasy BOOK SUMMARY: Sage is a young 14 year old orphan who is used to starving and stealing to survive. Sage's real adventure begins though when he meets Conner, a nobleman of the court. In a discontent kingdom, civil war is brewing. Our group rating for The False Prince was 3.8 out of 5 StarsWatch the book trailer below to learn a little of what this book is about. OUR GROUP REVIEW: Jenny did a fantastic job Moderating for The False Prince. . · Some themes we found in the book: One of the things we discussed was what some of the most powerful motivators for human behavior are, and what motivates different characters in the book.

"What a fun, surprising, engaging and entertaining read! 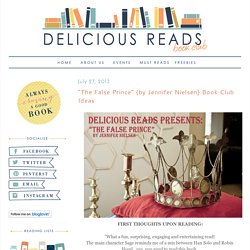 The main character Sage reminds me of a mix between Han Solo and Robin Hood...yes, you need to read this book. I'm thrilled that Jennifer is going to be making this series into a trilogy because I wanted to read MORE as soon as I was done with The False Prince! Jenny did a FANTASTIC job moderating this book! From the moment I walked into the meeting, I felt as if I were about to run into a Prince or King at any moment! See those scrumptious Cherry Tart Blossoms in the bottom right photo? Well, its your lucky day because you can download the recipe right HERE You can thank me later. Click HERE to download the recipe Rachelle used for the creamy and tasty Hasselback potatoes.

I brought some heavenly olive rosemary bread along with some Carrabba's inspired bread dipping spice and let me tell you... This stuff is ADDICTIVE!! If you'd like to make this scrumptious bread dip for yourself (which I highly recommend) then go HERE for copycat recipe! The False Prince. 'Game of Thrones' Editor to Adapt Paramount's 'The False Prince' (Exclusive) Bryan Cogman, who is the executive story editor on HBO’s Game of Thrones, has been hired to adapt The False Prince for Paramount. 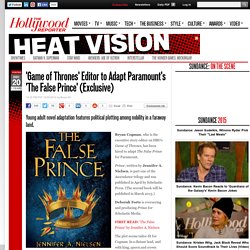 Prince, written by Jennifer A. Nielsen, is part one of the Ascendance trilogy and was published in April by Scholastic Press. (The second book will be published in March 2013.) Deborah Forte is overseeing and producing Prince for Scholastic Media. Jennifer A. Nielsen - Author. Book 1: The False Prince - Available Now (Scholastic) THE FALSE PRINCE is the thrilling first book in a brand-new trilogy filled with danger and deceit and hidden identities that will have readers rushing breathlessly to the end. 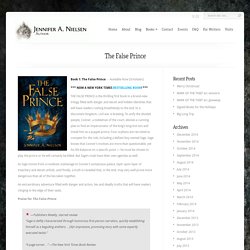 In a discontent kingdom, civil war is brewing. To unify the divided people, Conner, a nobleman of the court, devises a cunning plan to find an impersonator of the king’s long-lost son and install him as a puppet prince. Four orphans are recruited to compete for the role, including a defiant boy named Sage.

Sage knows that Conner’s motives are more than questionable, yet his life balances on a sword’s point — he must be chosen to play the prince or he will certainly be killed. As Sage moves from a rundown orphanage to Conner’s sumptuous palace, layer upon layer of treachery and deceit unfold, until finally, a truth is revealed that, in the end, may very well prove more dangerous than all of the lies taken together. Jennifer A. Nielsen - Author. 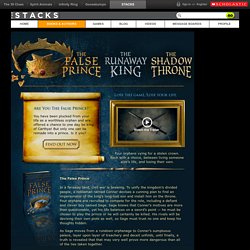 To unify the kingdom's divided people, a nobleman named Conner devises a cunning plan to find an impersonator of the king's long-lost son and install him on the throne. Four orphans are recruited to compete for the role, including a defiant and clever boy named Sage. Sage knows that Conner's motives are more than questionable, yet his life balances on a sword's point — he must be chosen to play the prince or he will certainly be killed.

His rivals will be devising their own plots as well, so Sage must trust no one and keep his thoughts hidden. As Sage moves from a rundown orphanage to Conner's sumptuous palace, layer upon layer of treachery and deceit unfolds, until finally, a truth is revealed that that may very well prove more dangerous than all of the lies taken together. An extraordinary adventure filled with danger and action, lies and deadly truths that will have readers clinging to the edge of their seats. The False Prince Storia Teaching Guide. Book Summary In the medieval kingdom of Carthya, a civil war is brewing. 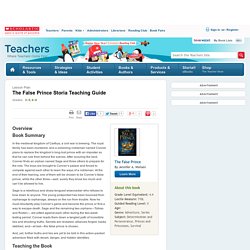 The royal family has been murdered, and a scheming nobleman named Conner plans to replace the kingdom’s long-lost prince with an imposter so that he can rule from behind the scenes. After scouring the land, Conner finds an orphan named Sage and three others to prepare for the role. The boys are brought to Conner’s palace and forced to compete against each other to learn the ways of a nobleman. At the end of their training, one of them will be chosen to be Conner’s false prince, while the other three—well, surely they know too much and can’t be allowed to live.

Sage is a rebellious and sharp-tongued wisecracker who refuses to bow down to anyone. And, yet, further truths and lies are yet to be told in this action-packed adventure filled with deceit, danger, and hidden identities.