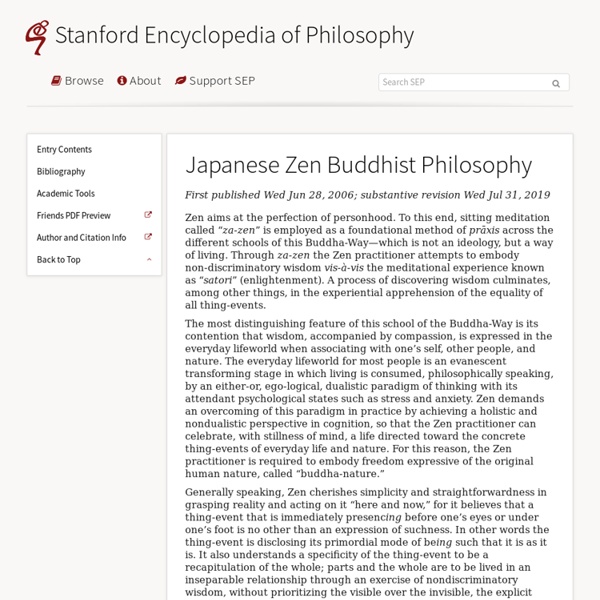 1. The Meaning of the Term Zen The designation of this school of the Buddha-Way as Zen, which means sitting meditation, is derived from a transliteration of the Chinese word Chán. Because the Chinese term is in turn a transliteration of the Sanskrit term dhyāna, however, Zen owes its historical origin to early Indian Buddhism, where a deepened state of meditation, called samādhi, was singled out as one of the three components of study a Buddhist was required to master, the other two being an observation of ethical precepts (sīla) and an embodiment of nondiscriminatory wisdom (prajñā). Meditation was picked as the name for this school because the historical Buddha achieved enlightenment (nirvāna) through the practice of meditation. In the context of Zen Buddhism, the perfection of nondiscriminatory wisdom (Jpn.: hannya haramitsu; Skrt.: prajñāpāramitā) designates practical, experiential knowledge. 2. 3. 3.1 The Adjustment of the Body 3.2 The Adjustment of Breathing 4. 5. 6. 7. 8. 9.

The Art of Living: Vipassana Meditation The following text is based upon a talk given by Mr. S.N. Goenka in Berne, Switzerland. Everyone seeks peace and harmony, because this is what we lack in our lives. From time to time we all experience agitation, irritation, dishar­mony. article8011035 Vedanta philosophy refers to the term “Maya” as the cosmic illusion on account of which the one appears as many, the Absolute as the Relative. Adi Sankara in the hymn Bhaja Govinda, also known as Moha Mudgara, cautions people about the power of Maya by which this entire creation is constituted, pointed out Sri B. Sundarkumar in a lecture. ‘The world is only as real as the image that is seen in a mirror,’ says the acharya in the Dakshinamurthy Stotra. When this image of the world is seen within oneself, it is similar to what is seen by one due to an illusion. In the state of sleep, one sees many scenes that appear real.

The Dalai Lama - At Home in Exile by David Turnley - The Digital Journalist Dirck Halstead photographs and videos by Dirck Halstead Categories Photography Video Pages DIY: Wine Bottle Light « Wit & Whistle November 3rd, 2009 This past spring Daniel and I went on a road trip from San Francisco to the Grand Canyon. Along the way we stopped at Chateau Julien for a wine tasting. I wanted to do something with the empty bottle instead of throwing it in the recycling bin. Why You're Not Who You Think You Are In his fascinating book Situations Matter: Understanding How Context Transforms Your World, psychology professor and researcher Sam Sommers, Ph.D, reveals the big impact context has on public behavior — how we think about others and even how we think about ourselves. According to Sommers, “Even the most private of perceptions — our very sense of self — is shaped by where we are and who we’re with, though we may resist this notion.” Our Iffy Introspection Complete this statement five times: “I am _____________.”

Qualia In philosophy, qualia (/ˈkwɑːliə/ or /ˈkweɪliə/; singular form: quale) are what some consider to be individual instances of subjective, conscious experience. The term "qualia" derives from the Latin neuter plural form (qualia) of the Latin adjective quālis (Latin pronunciation: [ˈkʷaːlɪs]) meaning "of what sort" or "of what kind"). Examples of qualia include the pain of a headache, the taste of wine, or the perceived redness of an evening sky. As qualitative characters of sensation, qualia stand in contrast to "propositional attitudes".[1] Daniel Dennett (b. 1942), American philosopher and cognitive scientist, regards qualia as "an unfamiliar term for something that could not be more familiar to each of us: the ways things seem to us".[2] Erwin Schrödinger (1887–1961), the famous physicist, had this counter-materialist take:

en.m.wikipedia Prajñāpāramitā personified. From the Aṣṭasāhasrikā Prajñāpāramitā Sūtra. According to Edward Conze, the Prajñāpāramitā Sutras are "a collection of about forty texts ... composed somewhere on the Indian subcontinent between approximately 100 BC and AD 600 The Tibetan Book of Living and Dying In his foreword to the book, the 14th Dalai Lama says: In this timely book, Sogyal Rinpoche focuses on how to understand the true meaning of life, how to accept death, and how to help the dying, and the dead...Death and dying provide a meeting point between the Tibetan Buddhist and modern scientific traditions. I believe both have a great deal to contribute to each other on the level of understanding and practical benefit. Sogyal Rinpoche is particularly well placed to facilitate this meeting; having been born and brought up in the Tibetan tradition, he has received instructions from some of our greatest Lamas. Having also benefited from a modern education and lived and worked in the West, he has become well acquainted with Western ways of thought.

Recommended Reading: 65 Craft Blogs We Love It's April, which means it's officially stashbusting month! It's time to dust off all of the supplies hiding at the back of your closets and create using what you already have on hand. Think of it like spring cleaning, only much more fun! If you're planning to plow through your excess stash this month, you'll be needing plenty of ideas and inspiration.

100 Best Blogs for Psychology Students - StumbleUpon With the availability of so many different blogs and other internet resources, psychology students today have a unique opportunity to gain insights and perspectives not otherwise available to their predecessors. Some information comes straight from professionals, others from students, and still others straight from the patients themselves. Though one should always practice discretion when perusing data and research on the internet, most researchers professionally offer links to reliable sources such as journal articles and websites for the American Psychological Association, National Institute of Mental Health, and other respected organizations.

Is Consciousness Universal? For every inside there is an outside, and for every outside there is an inside; though they are different, they go together. —Alan Watts, Man, Nature, and the Nature of Man, 1991 I grew up in a devout and practicing Roman Catholic family with Purzel, a fearless and high-energy dachshund. www.britannica Prajnaparamita, (Sanskrit: “Perfection of Wisdom”) body of sutras and their commentaries that represents the oldest of the major forms of Mahayana Buddhism, one that radically extended the basic concept of ontological voidness (shunyata). The name denotes the female personification of the literature or of wisdom, sometimes called the Mother of All Buddhas. In the Prajnaparamita texts, prajna (wisdom), an aspect of the original Eightfold Path, has become the supreme paramita (perfection) and the primary avenue to nirvana.

Etched Portion Control Wine Glass OK, confession: I’m on Weight-Watchers. And a major part of the program isn’t completely restricting what you eat and drink, but you DO have to watch and control your portions. This goes for wine, too. What Does Your Body Language Say About You? How To Read Signs and Recognize&Gestures - Jinxi Boo - Jinxi Boo - StumbleUpon Art by LaetitziaAs we all know, communication is essential in society. Advancements in technology have transformed the way that we correspond with others in the modern world. Because of the constant buzz in our technological world, it's easy to forget how important communicating face-to-face is. When conversing old-school style, it's not only speech we verbalize that matters, but what our nonverbal gestures articulate as well. Body language is truly a language of its own.