The Gnosis Archive: Resources on Gnosticism and Gnostic Tradition 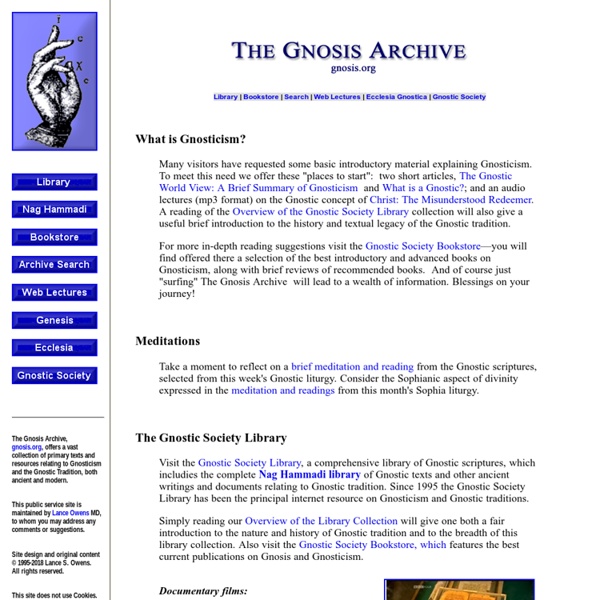 What is Gnosticism? Many visitors have requested some basic introductory material explaining Gnosticism. To meet this need we offer these "places to start": two short articles, The Gnostic World View: A Brief Summary of Gnosticism and What is a Gnostic?; and an audio lectures (mp3 format) on the Gnostic concept of Christ: The Misunderstood Redeemer. A reading of the Overview of the Gnostic Society Library collection will also give a useful brief introduction to the history and textual legacy of the Gnostic tradition. For more in-depth reading suggestions visit the Gnostic Society Bookstore—you will find offered there a selection of the best introductory and advanced books on Gnosticism, along with brief reviews of recommended books. Meditations Take a moment to reflect on a brief meditation and reading from the Gnostic scriptures, selected from this week's Gnostic liturgy. The Gnostic Society Library Documentary films: Nag Hammadi Library collection updated: Gnosis and C. "C.G. C. C.

teilhard-de-chardin Teilhard de Chardin Have Yourself a Teilhard Kind of Christmas For several weeks, through the eyes of 21st Century theologians, we have been gazing into the mind, heart, and mystical, poetic soul of Pierre Teilhard de Chardin. Brilliant scientist, creative thinker, man of faith, Teilhard brings into harmony recent discoveries about an evolving universe and his faith in the Christic presence at the heart of it all. We have already seen that for Teilhard the concept of original sin, committed by our first parents in a lost garden of paradise, was incompatible with the reality of an evolving universe where everything is moving into fullness of being, including God.

Christian Astrophysicist Offers Brilliant Reply to Richard Dawkins’ Criticism of Intelligent Design – Faithwire “After four weeks, not only did they fail to produce a single word of the English language, they got bored and started defecating on the keyboards.” That was the end result of the infamous test of the ‘Infinite Monkey Theorem.’ The theory, a favorite of atheist author Richard Dawkins, attempts to explain how an incredibly fine-tuned universe such as ours could have spontaneously appeared from nothing through an unguided process. What is Tantra? A Primer on Tantric Meditation – OmStars Tantra is as misunderstood in the West, where it’s become synonymous with sexual rituals, as in the East, where it’s considered magic alchemy. But Tantra is actually a vast science that encompasses wisdom from Ayurvedic medicine, Samkhya/Yoga philosophy, Vedanta, Jyotish astrology and spiritual practices using yantras and mantras. The ultimate goal of Tantra is to systematically utilize all of the methods we can to accelerate transformation and help the practitioner to create a life that is richer and more complete. Its focus is on providing the correct approach and specific techniques to cause an individual to grow, become stronger and more capable by undoing all obstacles to freedom in the fastest way possible. According to Sandra Anderson, senior faculty at the Himalayan Institute, “Tibetan Buddhism, the philosophy of Kashmir Shaivism, and shakti sadhana (worship and practices centered on the Divine Mother) are all examples of the diverse faces of Tantra.” By Inge Sengelmann

Kundalini Awakening - Prana flows in Ida OR Pingala #1: Prana normally flows in either Ida or Pingala: Our kundalini energy system is usually more active in either the left or right sides, which are the Ida and Pingala. Of the thousands of energy channels (nadis), three are most important: Ida, Pingala, and Sushumna (sometimes called "silver cord"), which is the central channel, and the most important. Solar and lunar breaths: The breath and the underlying energy, or Prana, usually flow predominantly on one side or other, the left or the right.

Pratyabhijna - Wikipedia Pratyabhijna (Sanskrit: प्रत्यभिज्ञा, translit. pratyabhijñā, lit. 're-cognition') is an idealistic monistic and theistic school of philosophy in Kashmir Shaivism, originating in the 9th century CE. The term Trika was used by Abhinavagupta to represent the entire Kashmir Shaivism or to designate the Pratyabhijna system.[1] The name of the system is derived from its most famous work, Īśvara-pratyabhijñā-kārikā by Utpaladeva.[2]:254 Etymologically, Pratyabhijna is formed from prati- ("re-") + abhi (preposition meaning "closely") + *jñā ("to know"). Yoga Sutras of Patanjali 2.49-2.53: Pranayama and breath control, rung #4 of 8 Fourth rung is Pranayama: The fourth of the eight rungs (2.29) of Yoga is Pranayama, which is regulating the breath so as to make it slow and subtle (2.50), leading to the experience of the steady flow of energy (prana), which is beyond or underneath exhalation, inhalation, and the transitions between them (2.51). The fourth Pranayama: The three pranayamas are exhalation, inhalation, and the transition (2.50). However, the fourth pranayama is that continuous prana which surpasses, is beyond, or behind the others (2.51). Thinning the veil of karma: The experience and repeated practice of this fourth pranayama thins the veil of karma, which usually clouds the inner light, allowing that to come shining through (2.52). Posture is the prerequisite: To successfully practice and attain the full benefits of breath control and pranayama, it is necessary that it be built on the solid foundation of a steady and comfortable sitting posture (2.46-2.48).

Fragments of a Faith Forgotten, by G.R.S. Mead [1900] Title PageSynopsis of ContentsIllustrationsIndex Introduction IntroductionProlegomena Some Rough Outlines of the Background of the Gnosis Preliminary ConsiderationsGreeceEgyptPhilo on the Contemplative LifeJewryAlexandria The Practice of Kashmir Shaivism This is a discourse on the ways which will lead an aspirant to one-pointedness in meditation and to the Awareness which he aspires. The first requirement is an absolutely clean mind which knows no duality and has feelings of sameness for everyone. This "sameness" means you do not over or under-express love for any one person in particular, nor should you possess animosity against any person. If you do not possess this sense of feeling sameness towards everyone, your efforts to achieve the Truth and Absolute in meditation will be totally wasted and will go unrewarded, like carrying water in a wicker basket to nowhere. In meditation there is no room for coarse feelings.

Kundalini Awakening - Kundalini Awakens #4: Awakening the Kundalini energy: After one is well established in the ability to balance the Prana between Ida and Pingala (section #2), and causing it to flow in Sushumna (section #3), the resulting sense of peace and joy is the foundation for the next step, which is awakening the Kundalini itself. Kundalini Awakening is for all: Regardless of what religious, spiritual, or meditation tradition one follows, the awakening of this Kundalini energy, by whatever name you call it, is a most innate and essential part of spiritual advancement, unfoldment, or realization. It may seem different when colored by different cultures, but the fundamental experience of the energy is there nonetheless.

Texts and Publications from the Rosicrucian Order, AMORC The Rosicrucian Order, AMORC e-book library is available for free online! We hope that you enjoy having this access to all of your favorite Rosicrucian publications and we would love it if you would consider posting a review on both Amazon and iBooks sharing with others the benefits that they might find in the timeless wisdom that this collection contains. The remaining AMORC titles will be added in the coming months so check back often! Mystic Triangle