Eight weeks to a better brain 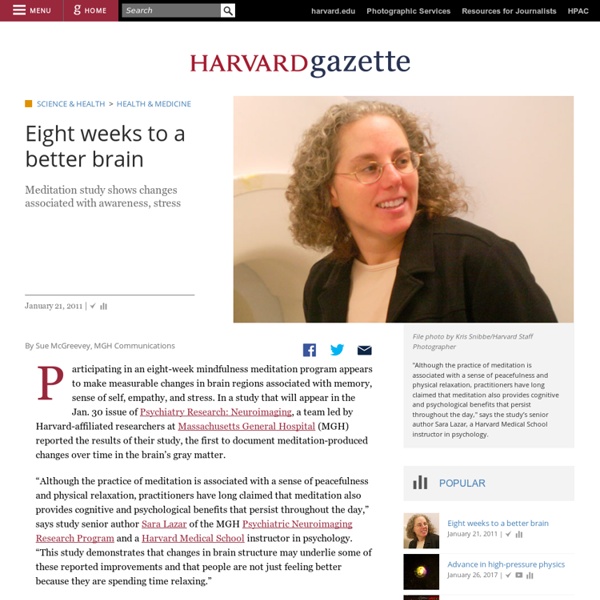 Participating in an eight-week mindfulness meditation program appears to make measurable changes in brain regions associated with memory, sense of self, empathy, and stress. In a study that will appear in the Jan. 30 issue of Psychiatry Research: Neuroimaging, a team led by Harvard-affiliated researchers at Massachusetts General Hospital (MGH) reported the results of their study, the first to document meditation-produced changes over time in the brain’s gray matter. “Although the practice of meditation is associated with a sense of peacefulness and physical relaxation, practitioners have long claimed that meditation also provides cognitive and psychological benefits that persist throughout the day,” says study senior author Sara Lazar of the MGH Psychiatric Neuroimaging Research Program and a Harvard Medical School instructor in psychology. Subscribe to the Daily Gazette Sign up for daily emails with the latest Harvard news.

What Happens to the Brain During Meditation? Meditation provides experiences that the mind can achieve no other way, such as inner silence and expanded awareness. And as the mind gains experience, the brain shows physical activity as well—sometimes profound changes. Beginning in the 1970s, studies showed that something was happening in the brain during meditation. In the last decade, the research has begun to show that meditation can also produce long-term structural changes in the brain. No longer is the “hard wiring” of neural circuits so dominant.

Meryl Davids Landau: 6 Tips For When Meditation Gets Rocky Here's what happened when I went to meditate the other day: The phone rang as I was about to start. I figured I hadn't even closed my eyes yet, so I answered. After finally extricating myself from the call, I had to search high and low for my lighter to get my candle glowing. Then I sat down and momentarily entered the stillness, only to be jarred by a honking car outside. Roughly five minutes in, I realized I had to go to the bathroom in the worst way. Alas, this was not an uncommon session -- and it was an occasion when I actually got around to putting butt to cushion, which I freely admit isn't every day.

Meditation and Magic Mushrooms Do the Same Thing to Your Brain Research shows that magic mushrooms work on the same area of the brain as meditation. But what does this mean for meditators and psychonauts? Meditation effects the same parts of the brain as magic mushrooms, according to current research. Magic mushrooms are one of the most well loved and widely used substances in the psychedelic pantheon, and have been for quite some time. Meet Arthur the stray dog who followed an extreme sports team through the Amazon rainforest Team Peak Performance were sat down for a meal before a 20 mile trek in Ecuador when they saw a stray dogSwedish group were taking part in the Adventure Racing World Championship through the Amazon rain forest Mikael Lindnord fed the animal a meatball before the team carried on - but the scruffy creature followed themThey tried to get rid of him, primarily for his own safety, but he refused to go so he became a fifth team memberThe group of four decided to name him Arthur and have now adopted him and flown him back to Sweden Lindord said: 'I came to Ecuador to win the World Championship. Instead, I got a new friend' By Wills Robinson for MailOnline

The independent mindfulness information website - Neuroscience of mindfulness Neuroscience is a vast subject, so we have tried to present the basic information you may need in order to understand the neuroscience behind mindfulness. Much of the content of this page has been extracted or adapted from Dr Shanida Nataraja's book "The Blissful Brain: Neuroscience and proof of the power of meditation", which is available in the Mindfulnet Amazon shop located on the resources page. All extracts and illustrations have been reproduced with the permission of the publisher & author. A brief introduction to the brain. The human brain is a reddish grey mass, with the consistency of firm jelly, which weighs on average the same as three bags of sugar and houses 100 billion individual brain cells called neurones.

What is Meditation / Mindfulness Good for? What are the effects of meditation & mindfulness, according to the latest scientific research? What’s it good for? And while we’re at it, what’s the difference between meditation and mindfulness anyway? We reviewed 75+ studies and compiled all the evidence in one graphic and datasheet. » Follow us on Email | Twitter | Facebook » See the data: » See our other graphics on thought & philosophical stuff » Check out our beautiful data-visualization books

100 Benefits of Meditation Did you know that people who meditate for a short time each day are much happier than people who don't? Meditators are much healthier with greatly extended life spans, too. As a matter of fact, their health is so much better that a number of insurance companies have reduced premiums for people who meditate. Did you know that experienced meditators have developed many latent abilities that they never knew they had, abilities that exist within every person? And they have gotten much closer to answering life's mysterious questions?

How to Focus a Wandering Mind We’ve all been there. You’re slouched in a meeting or a classroom, supposedly paying attention, but your mind has long since wandered off, churning out lists of all the things you need to do—or that you could be doing if only you weren’t stuck here… Suddenly you realize everyone is looking your way expectantly, waiting for an answer.

That Didn't Need To Take An Hour Have you ever finished something and thought to yourself, “That didn’t need to take an hour?” In my world, I have an endless stream of requests to do something for an hour. I just looked at my calendar for the next two weeks and almost everything that someone else scheduled and invited me to is for an hour. In contrast, all of the things I (or my assistant) have scheduled are for 30 minutes. And many of them will take five minutes.