Inspiration and Encouragement for Mindful Living 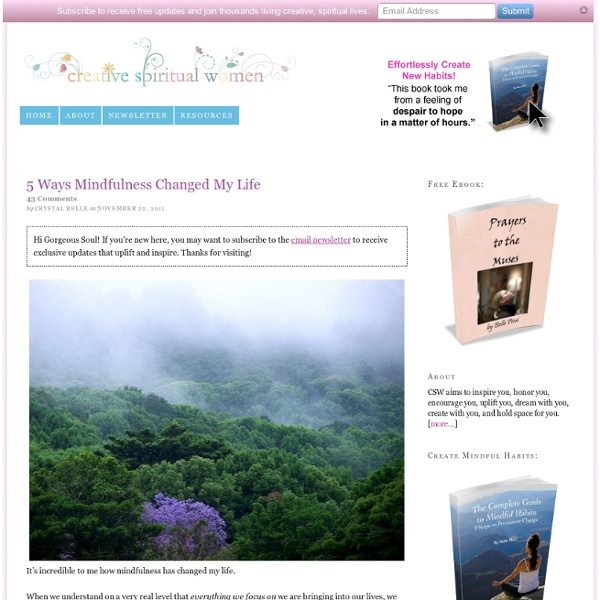 Hi Gorgeous Soul! If you're new here, you may want to subscribe to the email newsletter to receive exclusive updates that uplift and inspire. Thanks for visiting! It’s incredible to me how mindfulness has changed my life. When we understand on a very real level that everything we focus on we are bringing into our lives, we begin to see that there are fewer and fewer things that really deserve that kind of power. This is incredibly liberating and powerfully creative. As a result of the laser-like focus of mindfulness, I’ve learned the following life-altering things: 1. 2. It’s also a joy now to hear about new things that others are doing, and to be excited for them. 3. In asking myself, over and over, in so many beautifully present moments, “What do I love now? Should I feel guilty that I’m not: training for a marathon, writing the next great novel, learning Chinese and travelling constantly? 4. Now, it’s obvious to me that being a size 0 is not on my priority list, and that’s perfect. 5. Related:  Meditation • esoteric

Eight weeks to a better brain Participating in an eight-week mindfulness meditation program appears to make measurable changes in brain regions associated with memory, sense of self, empathy, and stress. In a study that will appear in the Jan. 30 issue of Psychiatry Research: Neuroimaging, a team led by Harvard-affiliated researchers at Massachusetts General Hospital (MGH) reported the results of their study, the first to document meditation-produced changes over time in the brain’s gray matter. “Although the practice of meditation is associated with a sense of peacefulness and physical relaxation, practitioners have long claimed that meditation also provides cognitive and psychological benefits that persist throughout the day,” says study senior author Sara Lazar of the MGH Psychiatric Neuroimaging Research Program and a Harvard Medical School instructor in psychology. Subscribe to the Daily Gazette Sign up for daily emails with the latest Harvard news.

Alternative theories of consciousness: some interesting ideas summarised and discussed. It is remarkable how poor a showing the whole idea of immaterial spirits now gets in both science and philosophy: after all, for many centuries most Europeans, including the brightest and most sophisticated thinkers, took it for granted that the explanation of consciousness lay in a spiritual realm, whereas now, as Searle has said about the existence of God, it isn't so much that everyone is a sceptic as that the question never even arises. Given that ideas from the Christian tradition are rather poorly served, it can hardly be surprising that other religious views are scarcely reflected at all in contemporary Western discussions of consciousness, in spite of the undeniable interest of many of them. In these pages we are currently no better than anyone else in this respect (but at least we are ashamed of ourselves). However, the spiritual view does have one able and well-qualified scientific champion in the shape of Sir John Eccles.

Level 3 of Consciousness by Richard Brodie Meme Central Books Level 3 Resources Richard Brodie Virus of the Mind What’s New? Site Map Level 3 of Consciousness You are reading about something that most people don’t even know exists. If you told them, they wouldn’t just not believe you—they would have no clue what you were talking about. 1. Sometimes like attracts like and sometimes opposite attracts opposite. When like attracts like, it can end there, like an oxygen molecule made up of two oxygen atoms, or it can continue to attract like, like a Carbon atom. 2. Sometimes a self-replicating thing makes a copy of itself with a mistake in it. The only way for new things to get created is by a complex series of mistakes that turn out to be better after all. 3. 4. 5. 6. Self-replication is the most powerful force in the universe. Sometimes a self-replicating memeplex makes a mistake in copying itself. The only way for a new idea to gain acceptance is by a series of copying mistakes that turn out to be better after all. 7. 8. 9.

How to Create an E-Course | Inspiration and Encouragement for Mindful Living Turn the knowledge you already have into automated income! This system actually takes you by the hand to show you how to turn your existing knowledge into an online, automatic income stream. Here are a few highlights from this system: See exactly how to create your own e-course with no program design skills The best way to create a great e-book in a matter of hours Discover the real reasons people buy e-courses, and how to position yours more effectively Unlock the secrets to great workbooks, and how to create them effortlessly How to price your e-course in a way that will bring you the most income

Meryl Davids Landau: 6 Tips For When Meditation Gets Rocky Here's what happened when I went to meditate the other day: The phone rang as I was about to start. I figured I hadn't even closed my eyes yet, so I answered. After finally extricating myself from the call, I had to search high and low for my lighter to get my candle glowing. Alas, this was not an uncommon session -- and it was an occasion when I actually got around to putting butt to cushion, which I freely admit isn't every day. But most people -- myself among them -- find meditating a challenge. Yet, from studying with meditation teachers and muddling through my own sitting practice for years now, I've come to realize her comment stems from a misunderstanding of what meditation is, and what it isn't. Loading Slideshow The Goal Is Space, Not SilenceThe late Swami Satchidananda, renowned for opening the Woodstock festival with his chanting, directed meditators to aim "see what is happening within you.

The Language of Light This page is dedicated to the incredible beauty and lyrical nature of the ‘Language of Light’. This universal language in it’s many forms is known throughout all of God’s creation by all living beings, both physical and non-physical. Although each race or lifeform creates their own unique variation of this language, the highlighted ‘angelic script’ illustrated below is the original language of Creation. It is also known as the Mother Tongue or the Language of the Angels. To continue, the angelic ‘language of light’ began to manifest itself to me upon my awakening. In addition, each of the angelic scripts and interdimensional symbol codes below are ‘living languages’; sending out resonant beneficial frequencies to all who view them. In conclusion, I would also like to say that it is actually more fluid and faster for me to write and draw these languages and symbols than it is to write my primary language of English. Thanks and enjoy, Bryan

How to meditate Feeling scatterbrained? Stressed-out and overwhelmed? Depressed? It’s time to calm your mind. Warning: your life might change if you start meditating. Develop appreciation for the mundane every-day tasks that bore you and keep you joyless. You gotta believe! Can’t sit still for an hour while you’re in a position that seems like you’d strain your groin staying in it for any longer than a minute? Don’t let that dissuade you from giving meditation a try. Meditation doesn’t have to be an impossible spiritual pursuit necessitating pure stillness. You can try moving meditations like tai chi or qi gong. Some people even meditate while they walk. Instead, focus is put on the setting, which can be anywhere that’s quiet (even if it’s the garage or laundry room). Go for a walk and “be in the present,” paying close attention to the rustling of the leaves on a tree or a flock of birds flying overhead. Try telling yourself this: “I’m attracting peace in my life.” How long should I meditate?

The Traveller’s Medicine Cabinet: 5 Essential Drugs for the Road While out roving you aren’t always (or even often) anywhere near a hospital or pharmacy. But, if you pack these nutritional supplements and natural medications wherever you go, you’ll be able to cope just fine. #1: Kratom The Situation You’re hiking the Appalachian trail in the dead of winter. Suddenly the worst happens; your boot gets caught between two rocks, you lose your footing and tumble to the ground, wrenching your ankle in the process. © Miserlou What It Is A leafy green plant grown mainly in Southeast Asia. Uses First and foremost, Kratom is a powerful painkiller similar to Morphine or Opium. Side-Effects Kratom is mildly addictive, about on par with caffeine. Forms Kratom can be purchased in dried leafy form, as an extract, a resin, or in pill form. Legality Kratom is legal in most of the developed world. #2: Kava Kava Kava Kava A leafy green plant grown throughout the Pacific islands. Kava can help to treat social anxiety or stress, and also works as a powerful relaxant. Oil of Oregano

100 Benefits of Meditation Did you know that people who meditate for a short time each day are much happier than people who don't? Meditators are much healthier with greatly extended life spans, too. As a matter of fact, their health is so much better that a number of insurance companies have reduced premiums for people who meditate. Did you know that experienced meditators have developed many latent abilities that they never knew they had, abilities that exist within every person? And they have gotten much closer to answering life's mysterious questions? They are much smarter, too. Were you aware that meditators produce immensely more pleasurable brain chemicals, the same chemicals that flow through your system on the days when you feel very good, and these pleasurable brain chemicals are produced constantly? Did you know that they also sleep much better? Also, meditators have far superior mental and emotional health. 1- It lowers oxygen consumption. 2- It decreases respiratory rate. 4- Increases exercise tolerance.