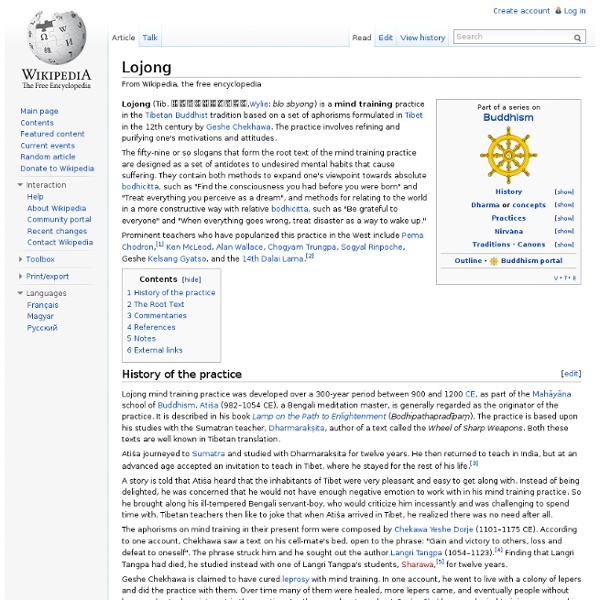 Lojong (Tib. བློ་སྦྱོང་,Wylie: blo sbyong) is a mind training practice in the Tibetan Buddhist tradition based on a set of aphorisms formulated in Tibet in the 12th century by Geshe Chekhawa. The practice involves refining and purifying one's motivations and attitudes. The fifty-nine or so slogans that form the root text of the mind training practice are designed as a set of antidotes to undesired mental habits that cause suffering. They contain both methods to expand one's viewpoint towards absolute bodhicitta, such as "Find the consciousness you had before you were born" and "Treat everything you perceive as a dream", and methods for relating to the world in a more constructive way with relative bodhicitta, such as "Be grateful to everyone" and "When everything goes wrong, treat disaster as a way to wake up." History of the practice[edit] Atiśa journeyed to Sumatra and studied with Dharmarakṣita for twelve years. Geshe Chekhawa is claimed to have cured leprosy with mind training. 1. 2.

How to Start a Small Business Writing a Business Plan, Section by Section Are you starting a business? Advice for small businesses on what it takes to create a solid business plan, including forming an outline, forecasting credible financial information, and establishing a marketing strategy. Business Plans by the Numbers

eBooks: Welcome Welcome to Buddhanet eBook!s! Here you will find our extensive collection of eBooks that were created by the Buddha Dharma Education Association Inc. for BuddhaNet.Net. List of cryptids The following is a list of cryptids, animals and plants studied under the field of cryptozoology. Their presumptive existence has often been derived from anecdotal or other evidence considered insufficient by mainstream science. The status of cryptids on this list falls into six categories: Unconfirmed – cryptids whose existence is alleged but not demonstrated.Disputed – cryptids that have a body of evidence against their existence.Proposed [animal name] – cryptids with an alternative explanation accepted by the general scientific community.Extinct – animals that are generally believed to be extinct, but which cryptozoologists believe may have an extant relict population.Confirmed [animal name or cause] – animals once classified as cryptids but whose existence has now been confirmed.Hoax – cryptids once thought to be real but later conclusively proven to be hoaxes. Cryptids[edit]

Famous INFJs - CelebrityTypes.com Carl Gustav Jung Psychiatrist, student of Freud, mentor of Von Franz, married to Emma Jung, dated Toni Wolff, Maria Moltzer and Sabina Spielrein Jung: "As far as we can discern, the sole purpose of human existence is to kindle a light in the darkness of mere being." Jung: "The creation of something new is not accomplished by the intellect but ... from inner necessity." List of common misconceptions From Wikipedia, the free encyclopedia This incomplete list is not intended to be exhaustive. This list corrects erroneous beliefs that are currently widely held about notable topics. Each misconception and the corresponding facts have been discussed in published literature. Note that each entry is formatted as a correction; the misconceptions themselves are implied rather than stated.

8 Crucial Elements of Startup Success Bill Clark is the CEO of MicroAngel Capital Partners, a venture firm that gives more investors access to alternative investments. He also gives investors the ability to invest in startups online through crowdfunding. You can follow him on Twitter @austinbillc. Most people understand that a high percentage of startups never make it. So what if you could give yourself a leg up on the competition? Below is a list of tips that may help your startup get to the next level.

Mindfulness In Plain English A PDF preview from the 20th edition - Click Here Special Offer - 20% Off the latest edition / The 20th Anniversary Edition - eBook or paperback / See Below "Mindfulness in Plain English" has been on UrbanDharma.org a while now for free download, but the edition I posted years ago was the first edition and is now rather dated. Over the last few months I have been in contact with the publisher at Wisdom Publications about M.I.P.E... NESRA - North East Sasquatch Researchers Association NESRA is an association of independent Bigfoot researchers and affiliated organizations who share strategies, theories, experiences and resources in a network, in hopes of discovering solid, scientific proof for the existence of the creatures known as Bigfoot or Sasquatch. While we encourage independent thought among our members, we want to stress that as a group, we do not subscribe to the idea that Bigfoot is anything other than a "flesh-and-blood", corporeal animal. Bigfoot or Sasquatch-type creatures may be rare, elusive and unusual, but they are in no way supernatural.

Family tree of the Greek gods Key: The essential Olympians' names are given in bold font. See also List of Greek mythological figures Notes How to Learn a Foreign Language Without Spending a Cent Last week at Far Away Places (my new travel blog), I shared some tips on how to learn Spanish fast. The short version: Hire a tutor. But what if you can’t afford a tutor? What if you don’t want to spend money but still want to learn a language? In this guest post from Benny Lewis, the Irish polyglot, he shares tips on how to learn a language on the cheap.

Smile Into Your Organs: “A smile is an inexpensive way to improve your looks” Charles Gordy I love the idea that smiling is used as a healing and meditation practice by many ancient cultures. Taoists believe that holding a smile on your face and directing it inwards towards your organs and inner body, is the key to good health and longevity. Traditional Balinese healers know that a smile washes away bad energy and recommend smiling meditation as a simple way to calm the mind and bring health to the soul. The inspirational Thich Nhat Hanh has always encouraged us to smile as part of our daily practice for a more peaceful world, and as an essential ingredient in any walking meditation. Photo by stuck in customs:

The British Columbia Scientific Cryptozoology Club British Columbia has been a fertile location for sightings of a bipedal hirsute hominid known colloquially as sasquatch. The name "sasquatch" was coined by J.W. Burns,an American schoolteacher living in BC, and is derived from a Chehalis word meaning wild man. Burns showed a tremendous interest in sasquatch starting from the 1920's, but he was not alone in his pursuit of date and information regarding this animal.