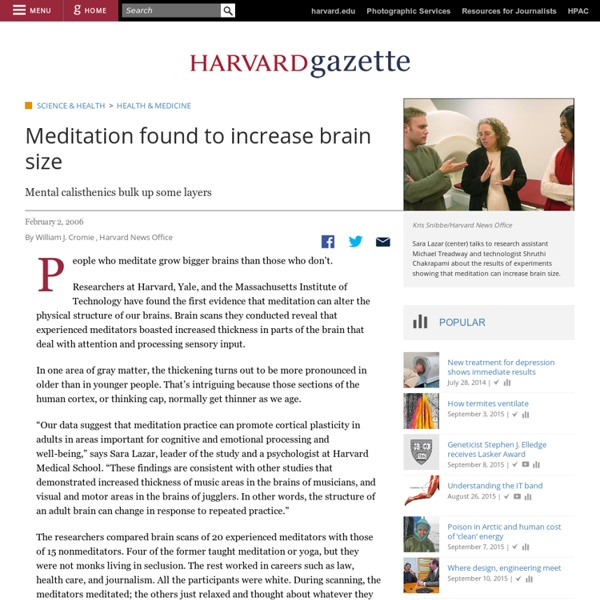 Kris Snibbe/Harvard News Office Sara Lazar (center) talks to research assistant Michael Treadway and technologist Shruthi Chakrapami about the results of experiments showing that meditation can increase brain size. People who meditate grow bigger brains than those who don’t. Researchers at Harvard, Yale, and the Massachusetts Institute of Technology have found the first evidence that meditation can alter the physical structure of our brains. Brain scans they conducted reveal that experienced meditators boasted increased thickness in parts of the brain that deal with attention and processing sensory input. In one area of gray matter, the thickening turns out to be more pronounced in older than in younger people. “Our data suggest that meditation practice can promote cortical plasticity in adults in areas important for cognitive and emotional processing and well-being,” says Sara Lazar, leader of the study and a psychologist at Harvard Medical School. Controlling random thoughts

Brain Atlas - Introduction The central nervous system (CNS) consists of the brain and the spinal cord, immersed in the cerebrospinal fluid (CSF). Weighing about 3 pounds (1.4 kilograms), the brain consists of three main structures: the cerebrum, the cerebellum and the brainstem. Cerebrum - divided into two hemispheres (left and right), each consists of four lobes (frontal, parietal, occipital and temporal). The outer layer of the brain is known as the cerebral cortex or the ‘grey matter’. It covers the nuclei deep within the cerebral hemisphere e.g. the basal ganglia; the structure called the thalamus, and the ‘white matter’, which consists mostly of myelinated axons. – closely packed neuron cell bodies form the grey matter of the brain.

15 ways to use vodka Keyboard: S - next A - previous R - random 15 ways to use vodka Share on FB 55920 Below Random Pics that horribly slippery slope Share on FB 160 Neuroconservation: Your Brain on Ocean Roaring Ocean, Oregon Coast. Photo by Charles Seaborn. The fate of the oceans is now in human hands, yet most of us ocean conservationists don’t know much about why people do things that harm the ocean, or how to motivate behavior that is good for the ocean.

Category:Portals See also: List of all portals and Featured portals This category contains Wikipedia portals and pages related to portals. A portal is a focus page which highlights a particular subject, to complement the main article on that subject. Portals feature articles covering the portal's theme, and generally provide lists of related articles, and thus provide an alternative means to browse on Wikipedia. Neuron All neurons are electrically excitable, maintaining voltage gradients across their membranes by means of metabolically driven ion pumps, which combine with ion channels embedded in the membrane to generate intracellular-versus-extracellular concentration differences of ions such as sodium, potassium, chloride, and calcium. Changes in the cross-membrane voltage can alter the function of voltage-dependent ion channels. If the voltage changes by a large enough amount, an all-or-none electrochemical pulse called an action potential is generated, which travels rapidly along the cell's axon, and activates synaptic connections with other cells when it arrives. Neurons do not undergo cell division. In most cases, neurons are generated by special types of stem cells.

Save Food from the Fridge by Jihyun Ryou Although we seem to think and talk about food almost constantly, do we really know how best to preserve it or do we leave this responsibility to technology? Design Academy Eindhoven graduate Jihyun Ryou feels we no longer understand how to treat food. Her Save Food from the Fridge project involves placing certain foods on a group of "knowledge shelves" outside the fridge. Christmas brain lectures available worldwide This year’s Royal Institution Christmas Lectures were a fantastic trip through neuroscience and the brain – and you can now watch them online from anywhere in the world. The Christmas Lectures are a traditional event where a leading scientist is chosen to present the latest developments in a fun and engaging way to a lecture theatre full of slightly posh kids. They’re televised in the UK but they’ve now been made available online and you can watch all three streamed over the net. And I really recommend you do as they’re fantastic. They’re presented by psychologist Bruce Hood and they’re packed with excellent demonstrations that use everything from cutting edge neuroscience technology to stuff you could find in your house. Enormously enjoyable whether your a fan or a profesional (or both).

Category:Outlines From Wikipedia, the free encyclopedia This is the parent category for pages in Portal:Contents/Outline of knowledge. See also: WP:OUTLINE and WikiProject Outlines. Making Sense of the World, Several Senses at a Time Our five senses–sight, hearing, touch, taste and smell–seem to operate independently, as five distinct modes of perceiving the world. In reality, however, they collaborate closely to enable the mind to better understand its surroundings. We can become aware of this collaboration under special circumstances. In some cases, a sense may covertly influence the one we think is dominant.