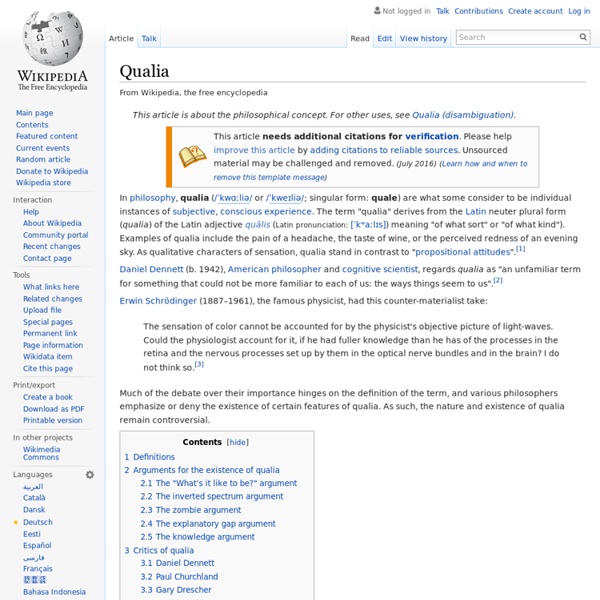 In philosophy, qualia (/ˈkwɑːliə/ or /ˈkweɪliə/; singular form: quale) are what some consider to be individual instances of subjective, conscious experience. The term "qualia" derives from the Latin neuter plural form (qualia) of the Latin adjective quālis (Latin pronunciation: [ˈkʷaːlɪs]) meaning "of what sort" or "of what kind"). Examples of qualia include the pain of a headache, the taste of wine, or the perceived redness of an evening sky. As qualitative characters of sensation, qualia stand in contrast to "propositional attitudes".[1] Daniel Dennett (b. 1942), American philosopher and cognitive scientist, regards qualia as "an unfamiliar term for something that could not be more familiar to each of us: the ways things seem to us".[2] Erwin Schrödinger (1887–1961), the famous physicist, had this counter-materialist take: The sensation of color cannot be accounted for by the physicist's objective picture of light-waves. Definitions[edit] Arguments for the existence of qualia[edit] E. J.

Related:  The Walk • - • The problems with philosophy

Is Consciousness Universal? For every inside there is an outside, and for every outside there is an inside; though they are different, they go together. —Alan Watts, Man, Nature, and the Nature of Man, 1991 I grew up in a devout and practicing Roman Catholic family with Purzel, a fearless and high-energy dachshund. He, as with all the other, much larger dogs that subsequently accompanied me through life, showed plenty of affection, curiosity, playfulness, aggression, anger, shame and fear. Yet my church teaches that whereas animals, as God's creatures, ought to be treated well, they do not possess an immortal soul. Only humans do.

Higher-order logic The term "higher-order logic", abbreviated as HOL, is commonly used to mean higher-order simple predicate logic. Here "simple" indicates that the underlying type theory is simple, not polymorphic or dependent.[1] Quantification scope[edit] Nuba peoples For the musical form, see Andalusi nubah or Nuubaat. Nuba man with body painting Nuba is a collective term used here for the peoples who inhabit the Nuba Mountains of South Kordofan state, in Sudan. Although the term is used to describe them as if they composed a single group, the Nuba are multiple distinct peoples and speak different languages. Estimates of the Nuba population vary widely; the Sudanese government estimated that they numbered 1.07 million in 2003.[1] Description[edit]

Japanese Zen Buddhist Philosophy 1. The Meaning of the Term Zen The designation of this school of the Buddha-Way as Zen, which means sitting meditation, is derived from a transliteration of the Chinese word Chán. Spinal cord The spinal cord is a long, thin, tubular structure made up of nervous tissue, that extends from the medulla oblongata in the brainstem to the lumbar region of the vertebral column. It encloses the central canal of the spinal cord that contains cerebrospinal fluid. The brain and spinal cord together make up the central nervous system (CNS). Model theory This article is about the mathematical discipline. For the informal notion in other parts of mathematics and science, see Mathematical model. Model theory recognises and is intimately concerned with a duality: It examines semantical elements (meaning and truth) by means of syntactical elements (formulas and proofs) of a corresponding language. To quote the first page of Chang and Keisler (1990):[1] universal algebra + logic = model theory. Model theory developed rapidly during the 1990s, and a more modern definition is provided by Wilfrid Hodges (1997):

Related:
Related:  The Walk   -  -   -  The problems with philosophy   -  A Long Walk to Water   -  WE WALK BY FAITH □   -  Peckham Walk   -  ZEN   -  Board of Innovation - intrapreneurship & accelerator design   -  Lucid Dreaming - Gateway to the Inner Self > Home   -  Michael Pritchard: How to make filthy water drinkable | Video on TED.com   -  The Gnosis Archive: Resources on Gnosticism and Gnostic Tradition   -  The Roots of Consciousness: Theory, The Biological Perspective   -  Out of Character: The Psychology of Good and Evil | Brain Pickings   -  Collective consciousness | Scoop.it   -  CheFuturo! Lunario dell'innovazione in Italia Che Futuro!   -  Determination Archives - Tiny Buddha   -  How Consciousness Evolved and Why a Planetary “Übermind” Is Inevitable | Brain Pickings   -  Look Into Your Mind   -  30 Questions to Ask Yourself Before You Die.   -  iGod - Chat with God   -  Fractal Enlightenment | A Layman’s Guide to Mindful Meditation   -  Is Consciousness Universal? - Scientific American   -  Can't Stand Meditation? This Technique is For You.   -  Train Your Brain to Think Like a Creative Genius   -  How Meditation Changes Your Brain Frequency   -  42 reflections on the meaning of life, the universe and everything — Meaning & Meaningfulness — Medium   -  Think with Google - Discover Marketing Research & Digital Trends   -  200+ Consciousness Raising Documentaries   -  2018 Internet Trends   -  The Ego and the Universe: Alan Watts on Becoming Who You Really Are | Brain Pickings   -  Zentangle: Pattern-Drawing as Meditation | Brain Pickings   -  Moz Blog - SEO and Inbound Marketing Blog   -  Atlas   -  Google Arts & Culture   -  Japanese Zen Buddhist Philosophy (Stanford Encyclopedia of Philosophy)