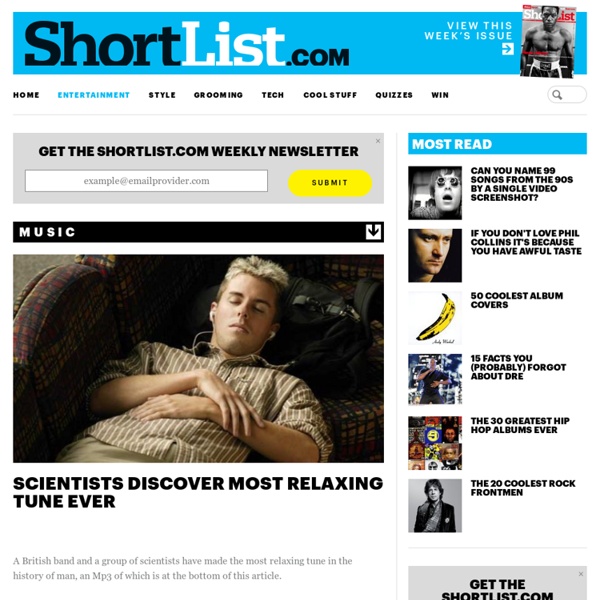 A British band and a group of scientists have made the most relaxing tune in the history of man, an Mp3 of which is at the bottom of this article. Sound therapists and Manchester band Marconi Union compiled the song. Scientists played it to 40 women and found it to be more effective at helping them relax than songs by Enya, Mozart and Coldplay. Weightless works by using specific rhythms, tones, frequencies and intervals to relax the listener. A continuous rhythm of 60 BPM causes the brainwaves and heart rate to synchronise with the rhythm: a process known as ‘entrainment’. Low underlying bass tones relax the listener and a low whooshing sound with a trance-like quality takes the listener into an even deeper state of calm.

Gödel and the limits of logic June 2006 The man in the photograph on the right looks formal, reserved and somewhat undernourished. His face and his writings are unfamiliar to most, except for a few philosophers and mathematical logicians. He was Kurt Gödel, celebrated for his incompleteness theorems, the implications of which are far-reaching for the foundations of mathematics and computer science. The story of his life and work is that of a persistent quest for rationality in all things, pursued against a background of recurrent mental instability. 4 Strategies for Working With Designers Without Killing Each Other Fourteen years ago, in my first job where my title was “Information Architect,” I clashed with a designer. We were working at a large advertising agency that was known for stunning design work. The art directors wielded a level of power at the agency that I have never seen anywhere else, and the result over the decades was a portfolio of gorgeous print and TV ads. The design-first method had worked well for this agency, winning them awards and a long roster of Fortune 500 clients, so they naturally decided to use this approach in their newly launched web department, too. Things went well for a while, until I attended a kickoff meeting for a new website project. The designer came to the meeting with an already completed graphic design, before any information had been provided about who the site was for or what it would do.

Find New Music We Are Hunted What the hell is everyone else listening to? We Are Hunted is a damn good looking and highly interactive music listening/discovery service that scrapes tracks from all sorts of blogs and P2P services to create emerging, mainstream, and genre-based charts. The Rubik's Cube Solution How to Solve the Rubik's Cube in Seven Steps The world's most famous puzzle, simultaneously beloved and despised for it's beautiful simple complexity, the Rubiks Cube has been frustrating gamers since Erno Rubik invented it back in 1974. Over the years many brave gamers have whole-heartedly taken up the challenge to restore a mixed Rubik's cube to it's colorful and perfect original configuration, only to find the solution lingering just out of their grasp time and time again.

40 Pictures of Airplanes Breaking the Sound Barrier Supersonic speed is a rate of travel of an object that exceeds the speed of sound (Mach 1). For objects travelling in dry air of a temperature of 20 °C (68 °F) this speed is approximately 343 m/s, 1,125 ft/s, 768 mph or 1,235 km/h. A sonic boom is the sound associated with the shock waves created by an object traveling through the air faster than the speed of sound. Sonic booms generate enormous amounts of sound energy, sounding much like an explosion.

Temple Grandin Early life and education[edit] Grandin was born in Boston, Massachusetts, to Eustacia Cutler and Richard Grandin. She was diagnosed with autism at the age of two in 1949. Diagnosed and labeled with brain damage, at that early age she was placed in a structured nursery school with what she considers to have been good teachers. After Grandin's mother spoke to a doctor who suggested speech therapy, she hired a nanny who spent hours playing turn-taking games with Grandin and her sister.[3]

All time lovable kid's plat as ... Pin Pres by OOO My Design is a kid’s room shelf that makes the act of sorting up the room a playful experience where the shelf adopts its form to the toys, books and other things that are being stored. Pin Pres has won Josep Ros furniture design [via] Visual Culture & Jammin' in the Rain Jammin’ in the Rain Rain doesn’t have to be dreary. The Rain Drum is a beat making product that features mounted sound inputs on the exterior of an umbrella top that make different drum noises when raindrops touch it. Video: The Contortionist Eager to master the arm balance? Equinox’s Briohny Smyth shows there’s no limit to what the artfully honed yoga body can do. Tuesday, January 03, 2012 | Q Editors Why are we all so terrified of-slash-mesmerized by-slash-obsessed with the yoga arm balance? What separates the student assuming child's pose from the one floating effortlessly (or seemingly so) into a handstand? The first answer is easy: they're intoxicating.

21 Terrifying Deep Ocean Creatures Scary Seas: 21 Terrifying Deep Ocean Creatures Article by Marc, filed under Destinations & Sights in the Travel category. The last true frontier on Earth is deep in the ocean. The Neuroscience Revolution is Here: 5 Ways To Supercharge Your Brain With TechnologyTheFeelGoodLifestyle.com “The brain is the last and grandest biological frontier, the most complex thing we have yet discovered in our universe. It contains hundreds of billions of cells interlinked through trillions of connections. The brain boggles the mind.”

Themed Teen Rooms (For Artist, Dancer, Rockstar and Scientist!) When we combed Carre’s site a few days back for some neat wardrobe designs, we couldn’t help but notice the set of themed teen room concepts they had for youngsters. Their teen room collection is broken down into four sets: Artist, Dancer, Rockstar and Scientist. Each set comes with its own set of props.