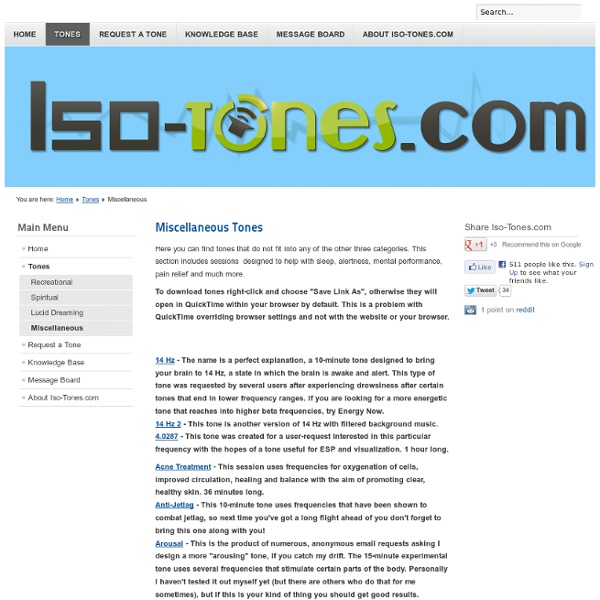 Here you can find tones that do not fit into any of the other three categories. This section includes sessions designed to help with sleep, alertness, mental performance, pain relief and much more. To download tones right-click and choose "Save Link As", otherwise they will open in QuickTime within your browser by default. This is a problem with QuickTime overriding browser settings and not with the website or your browser. 14 Hz - The name is a perfect explanation, a 10-minute tone designed to bring your brain to 14 Hz, a state in which the brain is awake and alert. Acne Treatment - This session uses frequencies for oxygenation of cells, improved circulation, healing and balance with the aim of promoting clear, healthy skin. 36 minutes long. Female Health - This 35-minute session is designed to support healthy menstruation and alleviate symptoms of PMS. Void - This 20-minute tone slowly entrains the brain to a "void-like" state.

You are a conformist (that is, you are human) The philosopher Hannah Arendt famously argued that the atrocities of the Holocaust were not caused by psychopaths but by ordinary people placed under extraordinary pressure to conform. Since then we have learned that the pressure need not be extraordinary at all. In fact, it may not be experienced as pressure, but as relief. Human beings are herd animals. In my class I sometimes do the following demonstration: I ask two student volunteers to step outside. "None of you refused to follow my instructions," I say. We are often not even aware when we are conforming. To keep ourselves in the warm confines of conformity, we rely on two independent yet related types of social cues. Sherif's experiment in a nutshell A classic study from the 30s by social psychologist Muzafer Sherif illustrated the dynamics of informational influence. So we use others to figure out what's going on. Informational cues, however, can also mislead us. Conformity creating a calamity

You Become What You Pretend to Be 0Share Synopsis Your attitude influences your behavior, and, conversely, your behavior influences your attitude. Our attitudes influence our behavior. Michelangelo accepted the commission. And it's also true that our behavior influences our attitudes. The great surrealist artist Salvador Dali was described by his fellow students at the Madrid art academy as "morbidly" shy according to his biographer Ian Gibson. The Greek philosopher Diogenes was once noticed begging from a statue. The Secret of Mona Lisa's Smile Think, for a moment, about social occasions-visits, dates, dinners out with friends, gatherings, birthday parties, weddings, etc. Leonardo da Vinci also observed that it's no mystery why it is fun to be around happy people and depressing to be around depressed people. Even Facial Expressions Can Change Your Emotions CIA researchers have long been interested in developing techniques to help them study facial expressions of suspects. Hold this expression and you will generate anger.

The Bridge Between DMT and Aliens? | The Lone Critic Mar 12 I have been having the most vivid, realistic dreams lately – some are good, some are frightening, but some seem out-of-place. By out-of-place, I don’t mean a wacky dream of random archetypes – but something with a deeper, almost innate emotion involved. 20% is day residue – events, thoughts, and interactions throughout ones’ day.20% is unfulfilled desires20% is subconscious fears, thoughts, etc20% is random neurotransmitter interactions20% is undetermined I now think that that a small % of dreams can be associated with DMT (dimethyltryptamine), a hallucinogenic chemical found in animals, plants, and even the human pineal gland. Are alien theme dreams correlated with DMT? Small quantities of DMT are released during REM sleep. I think DMT allows us to access a collective unconscious of stored archetypes dating back to our most primitive ancestors and even extra terrestrials.

10 Wise Choices to Skyrocket Your Happiness “The amount of happiness that you have depends on the amount of freedom you have in your heart.” – Thich Nhat Hanh Who doesn’t want to be happy? Just take a look at any moment of your life, any choice you make. Isn’t your intention to be happy? By happiness, I don’t necessarily mean the pollyanna, silly-smile-on-your-face kind. Somehow true happiness eludes us, and here’s why. Happiness is absolutely within your reach. 1. Don’t blame others, turn yourself into a victim, or wait for someone to come and save you. 2. Be willing, open, courageous, and humble. 3. Nothing kills happiness more quickly than old hurts, resentments, and grudges. 4. The cause of unhappiness is the playing out of conditioned habits that don’t serve you. 5. We unknowingly build our lives around distorted beliefs and expectations. 6. Happiness is found here, in the eternal now – not in the past or future. 7. Life becomes heavy and burdensome when we are ruled by difficult emotions. 8. 9. 10. Are you happy?

Cohan: Did Psychopaths Take Over Wall Street Asylum? It took a relatively obscure former British academic to propagate a theory of the financial crisis that would confirm what many people suspected all along: The “corporate psychopaths” at the helm of our financial institutions are to blame. Clive R. Boddy, most recently a professor at the Nottingham Business School at Nottingham Trent University, says psychopaths are the 1 percent of “people who, perhaps due to physical factors to do with abnormal brain connectivity and chemistry” lack a “conscience, have few emotions and display an inability to have any feelings, sympathy or empathy for other people.” As a result, Boddy argues in a recent issue of the Journal of Business Ethics, such people are “extraordinarily cold, much more calculating and ruthless towards others than most people are and therefore a menace to the companies they work for and to society.” How do people with such obvious personality flaws make it to the top of seemingly successful corporations? Stable Environment