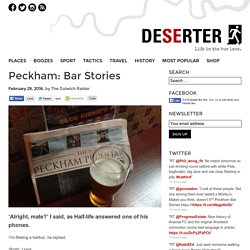 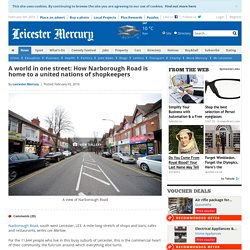 A mile-long stretch of shops and bars, cafes and restaurants, writes Lee Marlow. London Canals - The City's Waterways. Almost 50 Questions on the Gentrification of Peckham. Here follows a set of questions based on the past, present and future of Peckham as it undergoes continuing pressures of regeneration and the accompanying gentrification. 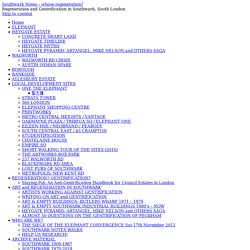 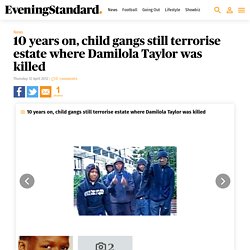 One said members of the Peckham Boys — the gang that Damilola's killers Rickie and Danny Preddie belonged to — still sold drugs openly, and carried knives and guns to terrorise rivals or those who tried to stop them. Another described how some residents were afraid to leave their homes at night, and warned that "things are as bad as ever" despite intensive efforts to regenerate the area in the wake of the 10-year-old's death in November 2000. Yesterday the Standard reported how Rickie Preddie, 23, is to be freed next month, less than four years after being given an eight-year jail sentence for manslaughter. He was 13 at the time and his brother Danny, who was 12, is due to be released next year. Peckham Rye Station - Peckham Vision. Further detailed updates are now on the Station Gateway page. 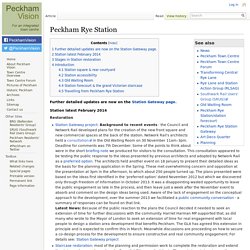 Station latest February 2014 Restoration Station Gateway project: Background to recent events - the Council and Network Rail developed plans for the creation of the new front square and new commercial spaces at the back of the station. Network Rail's architects held a consultation in the Old Waiting Room on 30 November 11am–3pm. Deadline for comments was 7th December. Sans titre. The Centre (1948) A complete list of stockists of The Peckham... The Spike Story. Surplus People. Big Smoke Blog - Peckham arts centre being evicted. Peckham Diamond Helps Save Community Threat. Peckham wheeler-dealer Del Boy Trotter would be proud of his neighbours’ enterprising gumption. 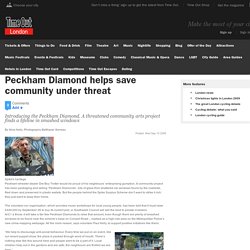 A community project has been packaging and selling ‘Peckham Diamonds’, bits of glass from shattered car windows found by the roadside, filed down and preserved in plastic wallets. But the people behind the Spike Surplus Scheme don’t want to strike it rich; they just want to keep their home.The volunteer-run organisation, which provides music workshops for local young people, has been told that it must raise £440,000 by September 26 to buy its current plot, or Southwark Council will sell the land to private investors. Landlords welcome 'positive squatting' When the occupants of the 491 Gallery in Leytonstone, east London, play squatters' Monopoly, a variation on the real game, they declare that the place they've lived in for the last seven years is the equivalent to Mayfair on the board game. 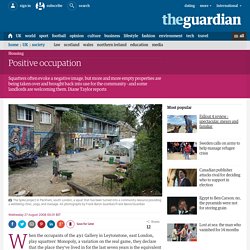 "This is by far the best squat I've ever lived in," says Sy, an artist. With its white-walled gallery space, airy rooms and landscaped garden it's easy to see why he and his six housemates find the place so appealing. But it wasn't always like this. The building, owned by Transport for London (TfL), had previously been used as a shooting gallery for heroin and crack addicts. A group of artist squatters came and took over the premises in October 2001. Local artists as well as those from further afield can exhibit art in the gallery. 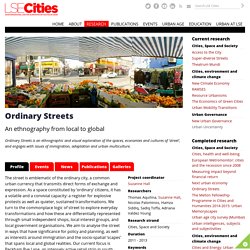 Some cookies on this site are essential, and the site won't work as expected without them. These cookies are set when you submit a form, login or interact with the site by doing something that goes beyond clicking on simple links. Urban Renaissance: How Peckham Became London's Cultural Epicentre. Picture credit: Max Farago 24 August 2015 Louisa McGillicuddy Miami, Basel, Venice... and Peckham. 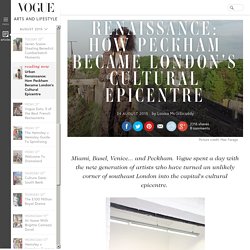 Vogue spent a day with the new generation of artists who have turned an unlikely corner of southeast London into the capital's cultural epicentre. On the top floor of a disused car park in south London, a crew of men is hoisting 15ft wooden trestles into place. Rosamund Urwin: Brutal control can never be called ‘honour’ It's a funny word, “honour”. 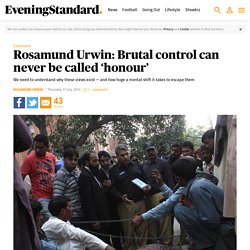 In the dictionary, it’s defined as “the quality of knowing and doing what is morally right” and “high respect; great esteem”. Yet we often hear it attached to the most morally abhorrent behaviour, committed by perpetrators who deserve no respect. Families forcing girls into marriages. Brothers blinding sisters. Parents killing daughters.