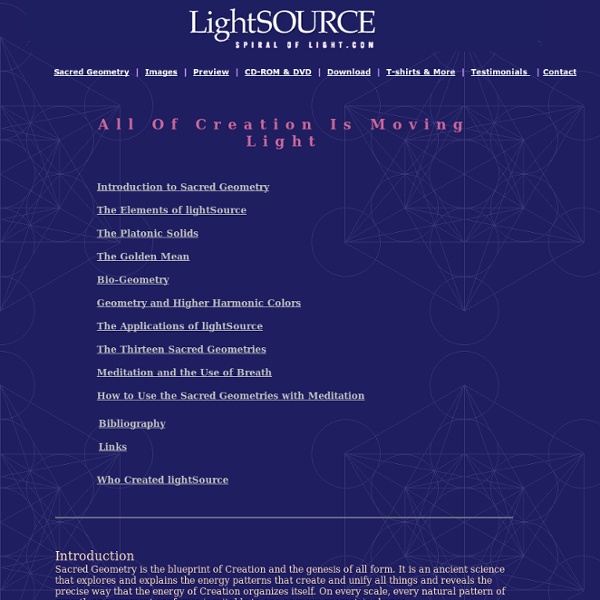 Introduction Sacred Geometry is the blueprint of Creation and the genesis of all form. It is an ancient science that explores and explains the energy patterns that create and unify all things and reveals the precise way that the energy of Creation organizes itself. On every scale, every natural pattern of growth or movement conforms inevitably to one or more geometric shapes. As you enter the world of Sacred Geometry you begin to see as never before the wonderfully patterned beauty of Creation. The molecules of our DNA, the cornea of our eye, snow flakes, pine cones, flower petals, diamond crystals, the branching of trees, a nautilus shell, the star we spin around, the galaxy we spiral within, the air we breathe, and all life forms as we know them emerge out of timeless geometric codes. Viewing and contemplating these codes allow us to gaze directly at the lines on the face of deep wisdom and offers up a glimpse into the inner workings of the Universal Mind and the Universe itself. 1.

"The Mind as the Software of the Brain" by Ned Block Ned BlockNew York University 1. Machine Intelligence 2. Intelligence and Intentionality 3. Golden Ratio by Mark Freitag Most people are familiar with the number Pi, since it is one of the most ubiquitous irrational numbers known to man. But, there is another irrational number that has the same propensity for popping up and is not as well known as Pi. Metatron Origins[edit] The identification of Metatron with Enoch is not explicitly made in the Talmud although it does reference a Prince of the World who was young but now is old. However, some of the earliest kabbalists assumed the connection.

English 50 Exercises for Story Writers English 50 – Intro to Creative Writing: Exercises for Story Writers Basic Theory: What is a short story? As soon as someone delivers a definition, some good writer will write a story that proves the theory wrong. Starting With Nothing and Ending Up With Everything by Bruce Rawles Question: What's black and white and blinks in and out of existence 1044 (a lot) times per second? And is in every 1/1033 cubic centimeter of space (every teeny tiny bit)? Answer: Hey ... Everything! —W. Robynne McWayne from the book Radical Reality The Math Behind the Beauty By M. Bourne Jessica Simpson What has mathematics got to do with beauty? Actually, a lot. Secret Teachings of All Ages: The Pythagorean Theory of Music and Color Index Previous Next HARMONY is a state recognized by great philosophers as the immediate prerequisite of beauty. A compound is termed beautiful only when its parts are in harmonious combination.

PHI - SOUND AND HEALING updated 9-12-10 by Dee Finney Author Marilyn Ferguson relates one such experience given by a physicist: "I saw cascades of energy coming down from outer space, in which particles were created and destroyed in rhythmic pulses; I saw the atoms of the elements and those of my body participating in this cosmic dance of energy; I felt its rhythm and I heard its sound, and at that moment I knew this was the Dance of Shiva... (Emphasis in original.) Fibonacci Numbers and The Golden Section in Art, Architecture and Music This section introduces you to some of the occurrences of the Fibonacci series and the Golden Ratio in architecture, art and music. Contents of this page The icon means there is a Things to do investigation at the end of the section. 1·61803 39887 49894 84820 45868 34365 63811 77203 09179 80576 ..More.. The Golden section in architecture

Color Meanings - Explore Palettes and Symbolism - Color Meaning and Colors That Go Together Updated October 28, 2015. Color symbolism is the use of color to represent traditional, cultural, or religious ideas, concepts, or feelings or to evoke physical reactions. Jump right to one of the colors or color groups I cover in detail or scroll past the color list for more general discussion of color meanings and how color works. Ascension Alchemy ®: Sacred Geometry, The Language Of Light New Formula: Preface New: in the winter of 2005 we had a square wave frequency generator built for us with multiple programmable channels utilizing a quartz oscillator that creates very precise frequencies with square wave forms. With frequency generators, whether used with plasma tubes, sound waves, etc. most researchers prefer square waves because they propagate harmonics.