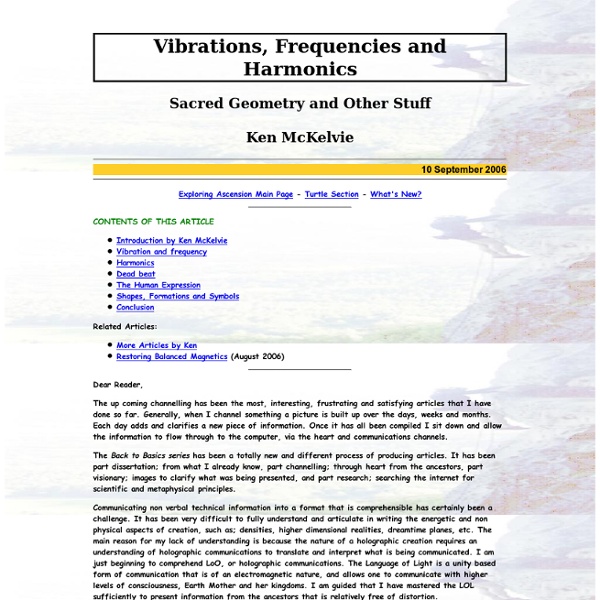 Exploring Ascension Main Page - Turtle Section - What's New? Related Articles: Dear Reader, The up coming channelling has been the most, interesting, frustrating and satisfying articles that I have done so far. Generally, when I channel something a picture is built up over the days, weeks and months. Each day adds and clarifies a new piece of information. The Back to Basics series has been a totally new and different process of producing articles. Communicating non verbal technical information into a format that is comprehensible has certainly been a challenge. Notwithstanding, I have found that there is usually a certain level of distortion in all information being channelled, irrespective of who that is; that which was yesterday and today may not necessarily be the same tomorrow. The back to basics series stemmed from my desire to understand exactly what the nature is of this destructive energy known as "electrical energy". Regards Ken McKelvie Please read the following quote: Cube - Earth Related:  lynnylouwho

8 Telex External Link Internal Link Inventory Cache This nOde last updated April 8th, 2008 and is permanently morphing... (2 Ik (Wind) / 5 Pohp (Mat) - 2/260 - 12.19.15.4.2) The Law of Octaves by Pythagoras the Science of Yoga - the Eight limbs (steps) Buddha and his Noble Eight Fold Path to enlightenment one of the particle symmetries in high energy physics is called "the eightfold path" The word 'byte' is a contraction of 'by eight.' Timothy Leary's 8-Circuit brain model 1st circuit: Survival/security Things are okay or they're not, or somewhere in between. time may compensate by eating, especially sweet things, pudding, 'nursery food' that makes them feel better for a while. 2nd circuit: Territorial/Emotional This is a very particular definition of 'emotional' - are you feeling up or down? defend it against others by throwing shit at each other (in the form of words, lawsuits, horn honking, or however you prefer to 'dump on' people). One of the ideas that came up in feedback information

PHI - SOUND AND HEALING updated 9-12-10 by Dee Finney Author Marilyn Ferguson relates one such experience given by a physicist: "I saw cascades of energy coming down from outer space, in which particles were created and destroyed in rhythmic pulses; I saw the atoms of the elements and those of my body participating in this cosmic dance of energy; I felt its rhythm and I heard its sound, and at that moment I knew this was the Dance of Shiva... Occultist Alice A. "The new religion will be one of Invocation and Evocation, of bringing together great spiritual energies and then stepping them down for the benefitting and the stimulation of the masses. GEOFFREY HODSON, Epsom, Auckland, New Zealand 1952.. My consciousness was caught up into a realm radiant with that light which never was on land or sea. There is a complete science for invoking devatas -- gods. Actually, in the same space, there is a multidimensional existence. The reverberations of sound is one which re-echoes many times. Fractal Music Generation OM.

Golden Ratio Discovered in the Quantum World | Science By Rakefet TavorEpoch Times Staff Created: January 19, 2010 Last Updated: June 17, 2012 PICTURING THE GOLDEN RATIO: Scientists fired neutrons at cobalt niobate particles, finding resonant notes with the golden ratio. (Tennant/HZB) The “golden ratio,” which is equal to approximately 1.618, can be found in various aspects of our life, including biology, architecture, and the arts. But only recently was it discovered that this special ratio is also reflected in nanoscale, thanks to researchers from the U.K.’s Oxford University, University of Bristol, and Rutherford Appleton Laboratory, and Germany’s Helmholtz-Zentrum Berlin for Materials and Energy (HZB). Their research, published in the journal Science on Jan. 8, examined chains of linked magnetic cobalt niobate (CoNb2O6) particles only one particle wide to investigate the Heisenberg Uncertainty Principle. Neutrons were fired at the cobalt niobate particles to detect the resonant notes. Dr.

Sacred Geometry: Deciphering the Code Colors and their symbolism - effect of sunlight and all colors on humanbeings, color calculator Sun is the source of light and heat to sustain life on our planet ‘earth’. This is the reason Sun is treated as ‘God’ in ancient Greek and Hindu scriptures. Sunlight appears to be in gold color but it contains 7 different colors visible to us. They are Violet, Indigo, Blue, Green, Yellow, Orange and Red. These colors exist at different wavelengths starting from 380 nm to 740 nm. Saptaswaradhamaarudham prachandam kasyapaatmjam | Swethapadma dharam devam tham suryam pranamamyaham || -I bow before Sun God, who rides on a chariot of 7 horses (7 colors of Sunlight) and who appears in brightest light sitting in a white lotus (white light). Astrology is called ‘Jyothisha’ (related to light) and it studies the effects of celestial light on the human beings. According to Einstein’s formula E = mc2, energy can be converted into mass. If we take different colors, they will have different wavelengths associated with them. Serotonin and Melatonin control the functioning of our body. Using colors:

Sacred Geometry NEW MOON: SACRED REALITY « Critical Trilogy Pisces New Moon; March 14, 2010 5:01 PM It was quite a synchronicity to open Orca Chantress Beluga Shaman by Leesa Sklover, a Jungian practitioner and enchanting chanteuse whom I heard speak at the Temenos Institute in Westport on Friday night. She played the Orca Chantress kundalini yoga chant at the close of her presentation,”A Jungian Look at Yoga Therapy, Meditation and Chant.” It was the most extraordinary blend of opposites (the spiritual and the sensual, the primal and the ecstatic) that I have ever heard! Leesa composes her world chants with her own exquisite voice blending into her collaborator Jim Nollman‘s interactions with dolphin and whales, along with wolves, bugs and birds! Check out Jim’s Interspecies Art Gallery! The music hits at my highest and lowest chakras simultaneously. She certainly has the sacred geometry down! It is the New Moon, after all, and the discovery brings to mind an alchemical image depicting the geometry of the six directions: sky: yod hey vav Like this: