A Long Walk to Water

Community Art Project Represents Water Returning To Bushnell Park. 'The Wave' Installation Is Part of EnvisionFest, City Celebration Sponsored By iQuilt Partnership 09.25.2012 - Hartford, CT - Artists Elena Kalman hangs part of a public art… (Mark Mirko ) September 25, 2012|By JULIE STAGIS, jstagis@courant.com, The Hartford Courant HARTFORD — — About a year ago, Connecticut artists Susan Hoffman Fishman and Elena Kalman were asked to create an art installation having to do with water for the Peabody Essex Museum in Salem, Mass. 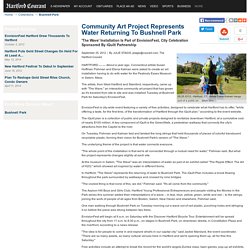 The artists, from West Hartford and Stamford, respectively, came up with "The Wave," an interactive community art project that has grown as it's traveled from site to site and was installed Tuesday at Bushnell Park for Saturday's EnvisionFest. MiiR // Designed to Empower // MiiR.com. Fresh Water: Making the Most of 2.5% This Video Will Get You Off Plastic. Lopez Lomong: From war child to U.S. Olympics star. Lopez Lomong is a former "Lost Boy" from Sudan who now runs for Team USALomong spent 10 years of his life in a refugee camp in KenyaHe was relocated in the United States as a teenager and became a U.S. citizen in 2007In 2008 he was picked to carry the American flag at Olympics opening ceremony in Beijing Editor's note: African Voices is a weekly show that highlights Africa's most engaging personalities, exploring the lives and passions of people who rarely open themselves up to the camera. 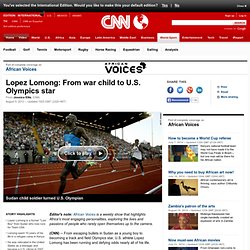 (CNN) -- From escaping bullets in Sudan as a young boy to becoming a track and field Olympics star, U.S. athlete Lopez Lomong has been running and defying odds nearly all of his life. Lomong, who carried the American flag into the 2008 Olympic Opening Ceremony in Beijing, was among the thousands of refugees known as "The Lost Boys," victims of Sudan's long and brutal civil war.

"I saw kids dying every day and I would say, 'OK, maybe next time it's going to be me,'" remembers Lomong, 27. Former U.S. Hepatitis Outbreak Kills 16 in South Sudan Refugee Camps. The Sudan and Darfur Research Collections. Connecticut Coalition to Save Darfur. Next Meeting Thursday, May 24, 2012 10:30 A.M. Harry and Jeanette Weinberg Community Services Building Zachs Campus 333 Bloomfield Road (entrance is on Simsbury Road) West Hartford, CT 06117 (860) 727-6100 Directions Vernon, CT — A small crowd gathered on the evening of Thursday, December 9 at Trinity Lutheran Church to learn more about the Darfuri Genocide and an upcoming referendum in South Sudan. 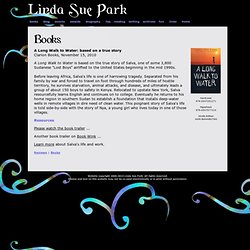 Before leaving Africa, Salva's life is one of harrowing tragedy. Separated from his family by war and forced to travel on foot through hundreds of miles of hostile territory, he survives starvation, animal attacks, and disease, and ultimately leads a group of about 150 boys to safety in Kenya. Relocated to upstate New York, Salva resourcefully learns English and continues on to college. 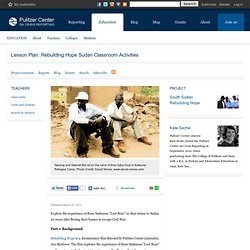 Part 1: Background Rebuilding Hope is a documentary film directed by Pulitzer Center journalist, Jen Marlowe. The film explores the experience of three Sudanese "Lost Boys" as they return to Sudan in 2007, 20 years after fleeing their homes to escape the Sudanese Civil War. Throughout the film, the young men assess their own hopes, dreams and fears as they return to their villages across Sudan, as well as those of the Southern Sudanese people nearly three years after the signing of the Comprehensive Peace Agreement.

They explore the connections between the conflict in South Sudan to the conflict in Darfur, probing the larger questions of identity and ethnicity in Sudan. You can also print a PDF of this lesson. Additional Resources Books Movies Websites Part 2: Student Preparation Part 3: In-Depth Video Segments with Discussion Questions and Additional Resources. Picture THIS: Taking Human Impact Seriously. UNICEF’s “Voices Of Youth” Is A Good Place To Write For An Authentic Audience. The Best Interactives Showing How Long Our Non-Renewables Will Last. The earth’s non-renewable resources are not going to last forever (hence, the reason for calling them “non-renewable”). 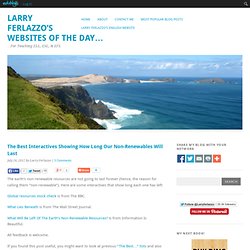 Here are some interactives that show long each one has left: Global resources stock check is from The BBC. What Lies Beneath is from The Wall Street Journal. What Will Be Left Of The Earth’s Non-Renewable Resources? The Burden of Thirst. What Eating At The Poverty Line Is Like Around The World.