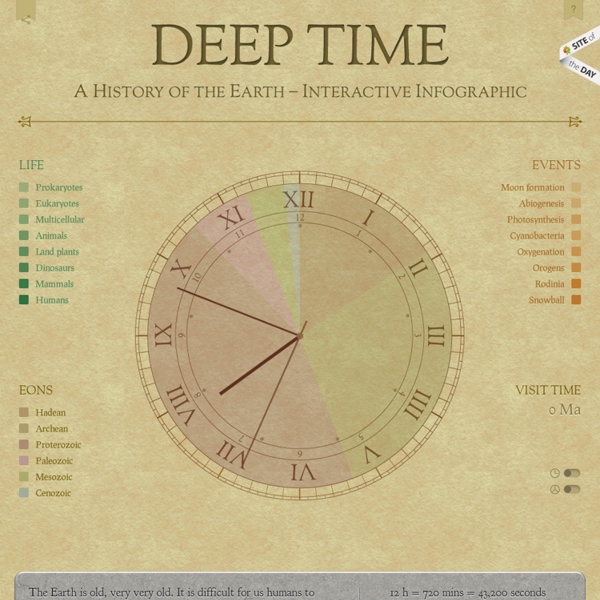 Life on the planet started astonishingly early. The first living organisms, in the current model of evolution, are thought to be Prokaryotes1. The oldest known fossilised prokaryotes have been dated to approximately 3.5 billion years ago, only 1 billion years after the formation of the Earth's crust. Eukaryotes2 are more advanced organisms with complex cell structures, each of which contains a nucleus. Although incredibly hard to determine their origin, they are thought to have developed 1.6–2.1 billion years ago, although some research2 suggests eukaryotes being present even earlier than this. Around 1.1 billion years ago multicellular3 organisms are thought to have started to develop, most likely similar in form to plants such as green algae. 200 million years later true multicellularity had also evolved in animals similar in nature to today's sponges, which are organisms which can reassemble themselves.

Mind Hacks News, Videos, Reviews and Gossip - Lifehacker We may control a lot of what our body does, but sometimes it rebels—whether its with brain freeze, a gag reflex, or just plain bad vision. Here are our top 10 body hacks that give the power back to you. P Planets Large and Small Populate Our Galaxy (Infographic) Buy This Infographic as a Full-Size Poster Astronomers have discovered more than 700 alien planets beyond the solar system, and the count is rising all the time. Some are large and hot, and others are smaller and cooler, but scientists are still on the lookout for an Earth twin.

Amy Brown Science: Science Chat: A First Day of School Science Lab Icebreaker... What will you do to make the first day of school a great day? What is the most important day of school? The first day! The first day of school is the most important day of the entire school year!! It is the day when students form their first impression of your class. Your Sky by John Walker Welcome to Your Sky, the interactive planetarium of the Web. You can produce maps in the forms described below for any time and date, viewpoint, and observing location. If you enter the orbital elements of an asteroid or comet, Your Sky will compute its current position and plot it on the map. Each map is accompanied by an ephemeris for the Sun, Moon, planets, and any tracked asteroid or comet.

Attention and Intelligence : The Frontal Cortex In both humans and mice, the efficacy of working memory capacity and its related process, selective attention, are each strongly predictive of individuals’ aggregate performance in cognitive test batteries. Because working memory is taxed during most cognitive tasks, the efficacy of working memory may have a causal influence on individuals’ performance on tests of “intelligence”. Despite the attention this has received, supporting evidence has been largely correlational in nature. Here, genetically heterogeneous mice were assessed on a battery of five learning tasks. Animals’ aggregate performance across the tasks was used to estimate their general cognitive abilities, a trait that is in some respects analogous to intelligence.

SIMBAD Astronomical Database SIMBAD on the Web is the WWW interface to the SIMBAD database. It offers the following functionalities: Query by identifiers and around identifiers Query by coordinates, specifying the radius and the equinox Query by bibcode and partial bibcode Sampling with a set of physical criteria Query by lists of objects, coordinates or bibcodes Display charts for list of objects resulting from coordinates query Here's How People Look at Your Facebook Profile When potential dates, employers and friends glance at your online social profiles, what do they see? EyeTrackShop, a startup that runs eye-tracking studies for advertisers, helped Mashable find out by applying its technology to the profile pages of popular social networks. The study used the webcams of 30 participants to record their eye movements as they were shown profile pages from Facebook, Google+, LinkedIn, Flickr, YouTube, Klout, Reddit, Digg, Tumblr, Twitter, StumbleUpon and Pinterest at 10-second intervals. What participants looked at on each page and in what order is recorded in the images below. It's not a perfect study. Thirty is a small sample size, and what draws attention on a profile likely varies depending on the content displayed.

It Does Something A Lot Weirder And now you all understand why Stephen Hawking is widely acknowledged as a genius. Until his proposal of black hole evaporation by virtual particles, no one had then made such a strong link between quantum mechanics and general relativity. Much however still remains to be done. 64 Things Every Geek Should Know « Caintech.co.uk If you consider yourself a geek, or aspire to the honor of geekhood, here’s an essential checklist of must-have geek skills. The term ‘geek’, once used to label a circus freak, has morphed in meaning over the years. What was once an unusual profession transferred into a word indicating social awkwardness. As time has gone on, the word has yet again morphed to indicate a new type of individual: someone who is obsessive over one (or more) particular subjects, whether it be science, photography, electronics, computers, media, or any other field. A geek is one who isn’t satisfied knowing only the surface facts, but instead has a visceral desire to learn everything possible about a particular subject. A techie geek is usually one who knows a little about everything, and is thus the person family and friends turn to whenever they have a question.

There Is No Time. There Never Was and There Never Will Be By: Josh Richardson, Prevent Disease Everything exists in the present moment and it’s a fundamental principle of the Universe that many of our scientists are still trying to grasp. Time does not actually exist and Quantum Theory proves it. There are things that are closer to you in time, and things that are further away, just as there are things that are near or far away in space. Programming Language Checklist Programming Language Checklist by Colin McMillen, Jason Reed, and Elly Jones. You appear to be advocating a new: [ ] functional [ ] imperative [ ] object-oriented [ ] procedural [ ] stack-based [ ] "multi-paradigm" [ ] lazy [ ] eager [ ] statically-typed [ ] dynamically-typed [ ] pure [ ] impure [ ] non-hygienic [ ] visual [ ] beginner-friendly [ ] non-programmer-friendly [ ] completely incomprehensible programming language. Your language will not work. Here is why it will not work.

Memories of Kurt Gödel [This memoir essay appeared in the magazine Science 82 in April 1982, and in my 1982 book Infinity and the Mind. It’s based on the “Conversations With Godel” documented in my previous post. Some of the photos are from a recent trip through the West, others from the 1970s.] [This is a cropped version of a photo by Arnold Newman.] I didn’t know where his real office door was, so I went around to knock on the outside door instead. This was a glass patio door, looking out on a little pond and the peaceful woods beyond the Institute for Advanced Study. How To Become A Hacker Copyright © 2001 Eric S. Raymond As editor of the Jargon File and author of a few other well-known documents of similar nature, I often get email requests from enthusiastic network newbies asking (in effect) "how can I learn to be a wizardly hacker?". Back in 1996 I noticed that there didn't seem to be any other FAQs or web documents that addressed this vital question, so I started this one.