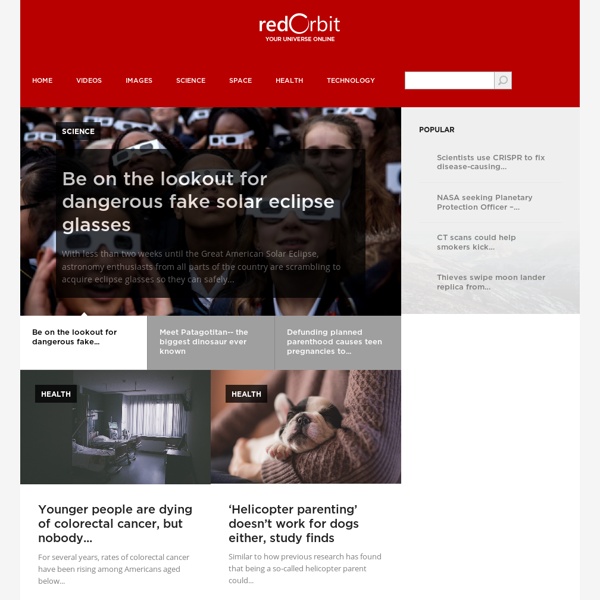 An Introduction (sort of) These pages were originally a few articles thrown up here and there. Later, I tried to put them in some sort of order. Keep in mind that just because you see something written on these pages, it doesn't mean that it's true. A lot of it is obsolete, as I haven't had the time to keep the pages up to date. At present, I am looking for work, so if you're interested in a mid level Linux admin whose experience includes a great deal of Windows and OS X desktop support, my resume can be viewed here. The History of the Universe in 200 Words or Less - StumbleUpon Quantum fluctuation. Inflation. Expansion. Strong nuclear interaction. Particle-antiparticle annihilation. Beyond 2012: Why the World Didn't End Beyond 2012: Why the World Didn't End If you're reading this story, it means the world didn't end on Dec. 21, 2012. Despite reports of an ancient Maya prophecy, a mysterious planet on a collision course with Earth, or a reverse in Earth's rotation, we're still here.

Ground Zero Have you ever wondered what would happen if a nuclear bomb goes off in your city? With Google's Maps framework and a bit of Javascript, you can see the outcome. And it does not look good. Search Usage Just enter the address of that boss, teacher, colleague or loved one. If you can find it in Google Maps, you can nuke it. Chemical clues on formation of planetary systems: Earth siblings can be different An international team of researchers, with the participation of IAC astronomers, has discovered that the chemical structure of Earth-like planets can be very different from the bulk composition of Earth. This may have a dramatic effect on the existence and formation of the biospheres and life on Earth-like planets. The study of the photospheric stellar abundances of the planet-host stars is the key to understanding how protoplanets form, as well as which protoplanetary clouds evolve planets and which do not. These studies, which have important implications for models of giant planet formation and evolution, also help us to investigate the internal and atmospheric structure and composition of extrasolar planets..

50 Years of Incredible Space Images From the European Southern Observatory This week marks the 50th anniversary of one of the world’s leading astronomical institutions, the European Southern Observatory. In honor of ESO’s birthday, we take a look at some of its most stunning shots of the night sky, amazing objects in space, and the organization's beautiful telescope facilities. ESO started when astronomers from five European countries – Belgium, France, Germany, the Netherlands, and Sweden – came together on Oct. 5, 1962 to build a telescope in the Southern Hemisphere. collect space space history and space artifacts news Long before the first Instagram from space, the first check-in from orbit, or even the first astronaut's tweet, John Glenn sent an email to Bill Clinton. The reply it prompted was the very first email transmitted by a sitting U.S. president — it just happened to be to space. April 18, 2014SpaceX launches science-packed Dragon capsule on space station supply run A commercial cargo spacecraft loaded with more than two tons of scientific experiments and equipment lifted off for the International Space Station on April 18, after more than a month of delays. SpaceX's Dragon launched on a Falcon 9 rocket from Cape Canaveral. April 17, 2014John Houbolt, NASA engineer who fought for Apollo moon landing method, dies

Magnifying the Universe Embed this infographic on your site! <iframe width="500" height="323" scrolling="no" src=" frameborder="0" allowfullscreen></iframe><br />Copyright 2012. <a href=" the Universe</a> by <a href=" Sleuth</a>. The above is an interactive infographic. Your Age on Other Worlds Want to melt those years away? Travel to an outer planet! <div class="js-required"><hr> This Page requires a Javascript capable browser <hr></div>