0006 Understand Earth in the solar system and universe.

Axis Tilt is Critical for Life. 0021 Understand the fundamental concepts and principles of Earth. Retrograde and prograde motion. This article is about retrograde motions of celestial bodies relative to a gravitationally central object. 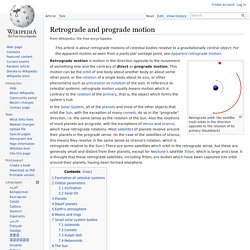 For the apparent motion as seen from a particular vantage point, see Apparent retrograde motion. Retrograde orbit: the satellite (red) orbits in the direction opposite to the rotation of its primary (blue/black) Formation of celestial systems[edit] When a galaxy or a planetary system forms, its material takes the shape of a disk. Most of the material orbits and rotates in one direction. Orbital parameters[edit] Inclination[edit] Axial tilt[edit] Planets[edit] All eight planets in the Solar System orbit the Sun in the direction that the Sun is rotating, which is counterclockwise when viewed from above the Sun's north pole. Dwarf planets[edit] Earth's atmosphere[edit] Retrograde motion, or retrogression, within the Earth's atmosphere refers to weather systems which move from east to west through the Westerlies or from west to east through the Trade wind easterlies.

Moons and rings[edit] [edit] Sun Facts - Interesting Facts about the Sun (Sol) The Sun or Sol, is the star at the centre of our solar system and is responsible for the Earth’s climate and weather. 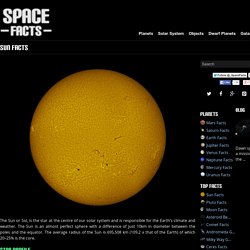 The Moon - Zoom Astronomy. The moon is Earth's only natural satellite. 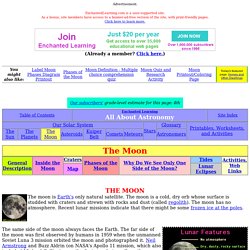 The moon is a cold, dry orb whose surface is studded with craters and strewn with rocks and dust (called regolith). The moon has no atmosphere. Recent lunar missions indicate that there might be some frozen ice at the poles. Planets - Zoom Astronomy. Advertisement. 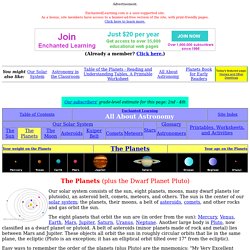 EnchantedLearning.com is a user-supported site. As a bonus, site members have access to a banner-ad-free version of the site, with print-friendly pages.Click here to learn more. (Already a member? Click here.) What Is a Planet? While many people can point to a picture of Jupiter or Saturn and call it a "planet," the definition of this word is much more subtle and has changed over time. 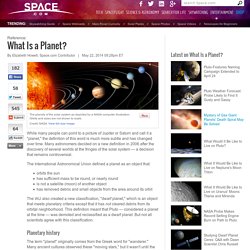 Many astronomers decided on a new definition in 2006 after the discovery of several worlds at the fringes of the solar system — a decision that remains controversial. The International Astronomical Union defined a planet as an object that: orbits the sun has sufficient mass to be round, or nearly round is not a satellite (moon) of another object has removed debris and small objects from the area around its orbit The IAU also created a new classification, "dwarf planet," which is an object that meets planetary criteria except that it has not cleared debris from its orbital neighborhood. 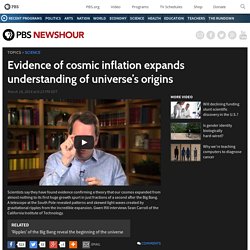 And that was after the Big Bang. Scientists said they confirmed that theory by using this telescope at the South Pole to look at the oldest light detectable. The light reveals patterns and skewed light waves, shown here in red and blue, that were created by gravitational ripples during the — this incredible expansion known as cosmic inflation. Sean Carroll is a physicist, cosmologist and author at the California Institute of Technology, and he joins us now to explain all of this. And we need your explanation. SEAN CARROLL, California Institute of Technology: Well, it is. The term cosmic inflation was coined around 1980, when the ordinary economic inflation was also very much in the news. For example, it looks similar, it looks smooth all over the place. SEAN CARROLL: Well, it’s very similar. Big Bang Theory. 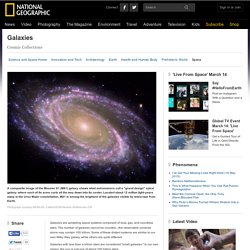 The number of galaxies cannot be counted—the observable universe alone may contain 100 billion. Some of these distant systems are similar to our own Milky Way galaxy, while others are quite different. Galaxies with less than a billion stars are considered "small galaxies. " In our own galaxy, the sun is just one of about 100 billion stars. Galaxies are classified into three main types: spiral galaxies, elliptical galaxies, and irregular galaxies. Life cycle of star. Types of Stars by Size, Color and Life Cycle. Learn to identify the different sizes and colors of stars and how they relate to the star life cycle. 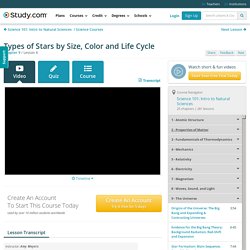 In this lesson, we'll talk about spectral classification, how many stars there are of each type and the approximate color of the different classes of stars. Explore our library of over 10,000 lessons You now have full access to our lessons and courses, watch the lesson now or keep exploring. You've watched a video! Now you are officially smarter, check out the next video or take the quiz to keep learning. You took a quiz! You just finished your first lesson. You're making great progress. You've learned so much, but only scratched the surface. Getting a perfect score on a quiz is how you gain course progress. You're getting the hang of this! Look how far you've come! Keep clicking that 'next lesson' button whenever you finish a lesson and its quiz.