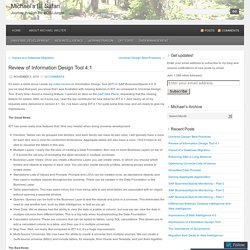 If you’ve read that post, you know that I was frustrated with missing features in IDT, as compared to Universe Design Tool. Every time I found a missing feature, I opened an Idea on the SAP Idea Place, requesting that the missing feature be added. Well, as it turns out, I was the top contributor for new ideas for IDT 4.1. And nearly all of my requests were delivered in version 4.1. So, I’ve been using IDT 4.1 for quite some time now, and am ready to give my impressions.

The Good News IDT has some really nice features that I find very helpful when doing universe development. Families: Tables can be grouped into families, and each family can have its own color. Impressions of Information Design Tool. It’s been well over two years since I got my first look at the SAP BusinessObjects Information Design Tool (IDT). 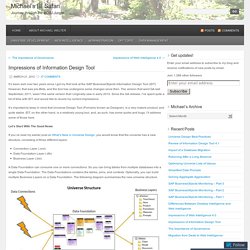 However, that was pre-Beta, and the tool has undergone some changes since then. The version that went GA last September, 2011, wasn’t the same version that I originally saw in early 2010. Since the GA release, I’ve spent quite a bit of time with IDT, and would like to record my current impressions. It’s important to keep in mind that Universe Design Tool (Formerly known as Designer), is a very mature product, and quite stable. IDT, on the other hand, is a relatively young tool, and, as such, has some quirks and bugs. Let’s Start With The Good News. Universe Design Best Practices. I’ve always avoided writing a blog on universe best practices, primarily because there have been many others who have written some excellent blogs on the topic. 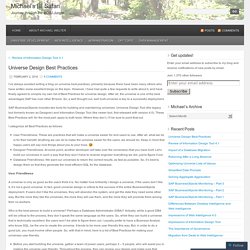 However, I have had quite a few requests to write about it, and have finally agreed to compile my own list of Best Practices for universe design. After all, the universe is one of the best advantages SAP has over other BI tools. So, a well thought out, well built universe is key to a successful deployment. SAP BusinessObjects includes two tools for building and maintaining universes: Universe Design Tool (the legacy tool formerly known as Designer) and Information Design Tool (the newer tool, first released with version 4.0). These Best Practices will, for the most part, apply to both tools. An Introduction to Analytic Functions. Purpose: Analytic Functions are database functions defined in the universe and passed through to the database server. 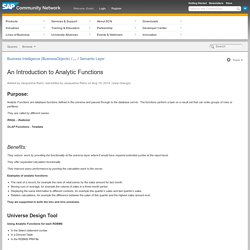 The functions perform a task on a result set that can order groups of rows or partitions. They are called by different names: RISQL - Redbrick OLAP Functions - Teradata Benefits: They reduce work by providing the functionality at the universe layer where it would have required extended syntax at the report level. They offer expanded calculation functionality They Improve query performance by pushing the calculation work to the server Examples of analytic functions The rank of a record, for example the rank of retail stores by the sales amount for last month.Moving sum or average, for example the volume of sales in a three month periodDisplaying the same information in different contexts, for example this quarter’s sales and last quarter’s sales.Relative calculations, for example the difference between the sales of this quarter and the highest sales amount ever. 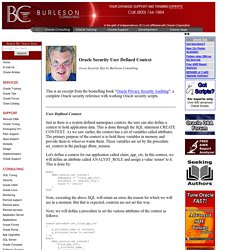 User Defined Context Just as there is a system defined namespace context, the user can also define a context to hold application data. This is done through the SQL statement CREATE CONTEXT. As we saw earlier, the context has a set of variables called attributes. The primary purpose of the context is to hold these variables in memory and provide them to whoever wants them. Dave’s Adventures in Business Intelligence » Universe Design. I had a question from a business user the other day. 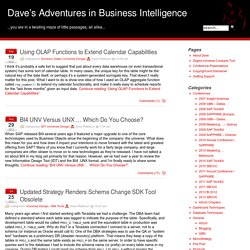 I was confident that I knew the answer as soon as I saw the first part of her question. To be sure, I waited until we got through the entire discussion. Her question started off with: I am doing date math — using nvl to set a date to jan 01 2099 when it is null… Right at that point I could have made good money by betting that she was getting a “non-numeric character was found where a numeric…” message. Universe Development. Lately, I’ve seen a lot of heartache over universe Lists of Values (LOV). 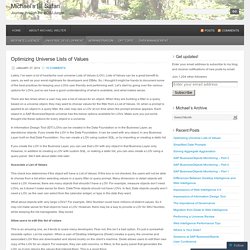 Lists of Values can be a great benefit to users, as well as your worst nightmare for developers and DBAs. So, I thought it might be handy to document some of the best practices for keeping your LOVs user friendly and performing well. Let’s start by going over the various options for LOVs, just so we have a good understanding of what is available, and what makes sense. There are two times when a user may see a list of values for an object. When they are building a filter in a query, based on a universe object, they may want to choose values for the filter from a List of Values. In Information Design Tool (IDT) LOVs can be created in the Data Foundation or in the Business Layer, as standalone objects.

If you create the LOV in the Business Layer, you can use that LOV with any object in that Business Layer only. Category Archives: Semantic Layer.