The Wall of Time 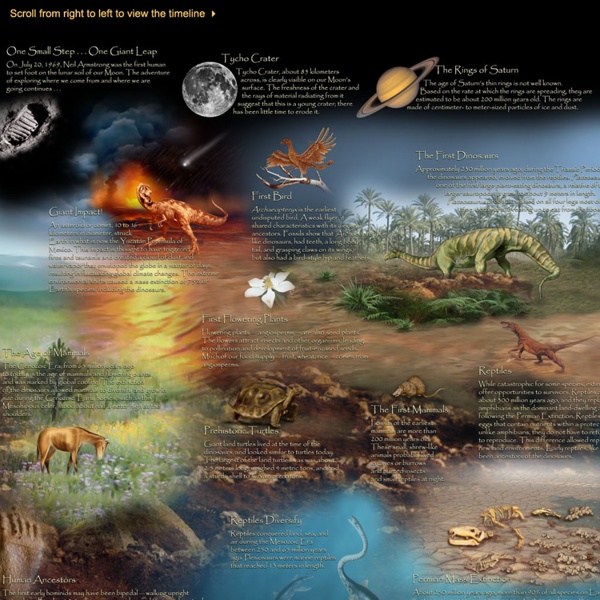 Geometry of the Universe Can the Universe be finite in size? If so, what is ``outside'' the Universe? The answer to both these questions involves a discussion of the intrinsic geometry of the Universe. At this point it is important to remember the distinction between the curvature of space (negative, positive or flat) and the toplogy of the Universe (what is its shape = how is it connected). It is possible to different curvatures in different shapes. For example, a torus (donut) has a negative curvature on the inside edge even though it is a finite toplogy. There are basically three possible shapes to the Universe; a flat Universe (Euclidean or zero curvature), a spherical or closed Universe (positive curvature) or a hyperbolic or open Universe (negative curvature). All three geometries are classes of what is called Riemannian geometry, based on three possible states for parallel lines The conformal space-time diagram is a good tool use for describing the meaning of CMB anisotropy observations.

This 78-page book on physics is selling more copies than 'Fifty Shades of Grey' Apparently, Italians find physics more sexy than S&M – at least for reading material. Since it was published last September, Carlo Rovelli's book Seven Brief Lessons on Physics has sold more copies in Rovelli's native country, Italy, than E.L. James' smash hit Fifty Shades of Grey, The Spectator reported. And the translated English copy has quickly risen to become Penguin's fastest-selling science debut in the publishing company's history. After all, it's not like physics is a topic that people flock toward. Well, for starters, Rovelli is an expert on the topic. Rovelli is also an avid writer of popular science, so he has a knack for transforming complex ideas into clear, simple concepts. "Rovelli has a rare knack for conveying the top line of scientific theories in clear and compelling terms without succumbing to the lure of elaborate footnotes," Nicola Davis, the commissioning editor of Tech Monthly, reported in The Guardian.

Topics Covered | The Partially Examined Life Philosophy Podcast We’ve done a lot of episodes now, and even we lose track of where we’ve been. We aim (among other things) to present the equivalent of an introductory course in all the major areas of philosophy. Here’s where I’ll periodically comment on our progress. Feel free to weigh in on our direction suggest additional topics as comments to this page. Jump to a Category:EthicsPolitical PhilosophyEpistemologyMetaphysicsPhilosophy of ArtPhilosophy of ReligionOther Topics Ethics We’re doing pretty well here, with the three main types covered: -Consequentialism (episode 9 on Bentham and Mill), which starts ethics by determining what’s the optimal state of affairs. With those basics out of the way, the next step is meta-ethics: how can moral commands exist in a natural universe? Related to this is moral psychology: how do we smooth-skinned animals come to think about moral considerations? What else is ahead?

The Absurdity of Infinity: Astrophysicist Janna Levin Explains Whether the Universe Is Infinite or Finite in Letters to Her Mother – Brain Pickings By Maria Popova In 1998, while on the cusp of becoming one of the most significant theoretical cosmologists of our time, mathematician-turned-astrophysicist Janna Levin left her post at Berkeley and moved across the Atlantic for a prestigious position at Cambridge University. During the year and a half there, she had the time and space to contemplate the question that would eventually become the epicenter of her career — whether the universe is infinite or finite. What began as a series of letters to her mother, Sandy, eventually became an unusual diary of Levin’s “social exile as a roaming scientist,” and was finally published as How the Universe Got Its Spots: Diary of a Finite Time in a Finite Space (public library) — a most unusual and absorbing account of the paradoxes of finitude. In an entry from September 3, 1998, Levin fleshes out her ideas on infinity and writes with exquisite Saganesque sensitivity to the poetics of science: No infinity has ever been observed in nature.

Watch the synchronisation of 32 metronomes (with an explanation behind it) - The Feed Blog (CBS News) A little over a year ago I posted a video on The Feed that showed a physics principle on display in the form of five metronomes that synched to each other with time and the right conditions. And it was very cool to watch we all learned something from it. So how about a quick refresher course, this time with 32 metronomes. Watch physics unfold in the video above. The science-in-action clip was posted by YouTube user IkeguchiLab , and for the explanation behind it, we refer back to the poster of the prior video, abahraminasab , who writes: Here you go: metronomes (or "pendula") when on table, oscillate with random phases, since that is how they started and they are "uncoupled" (no energy/information flows from one to other so they do not "know" each other.) So while not as obvious as in the prior video, it seems the table the 32 metronomes are on allows for enough movement to let this process take effect and lead to them synching with one another.

Stunning images of snowflakes under a (frozen) microscope [20 pictures] Researchers at Beltsville Agricultural Research Center have gathered samples of snow from around the country and are studying them under a microscope. To keep the flakes in their original shape, they’re viewed on a surface that has been chilled to -170 Celsius, or -224 Fahrenheit. (The microscope they use is understatedly labeled “low-temperature.”) Here are some of the amazing images coming from their research… On an interesting side note, man-made snow doesn’t vary in shape like natural snow does, and, in fact, doesn’t even look like natural snow at all when magnified. (via The Daily Mail)

Mythical Creatures List, Mythical Creatures A-Z Einstein's Unfinished Dream: Marrying Relativity to the Quantum World Don Lincoln is a senior scientist at the U.S. Department of Energy's Fermilab, the U.S.' largest Large Hadron Collider research institution. He also writes about science for the public, including his recent "The Large Hadron Collider: The Extraordinary Story of the Higgs Boson and Other Things That Will Blow Your Mind" (Johns Hopkins University Press, 2014). You can follow him on Facebook. Lincoln contributed this article to Space.com's Expert Voices: Op-Ed & Insights. This November marks the centennial of Albert Einstein's theory of general relativity. Einstein's theory of general relativity describes a broad range of phenomena, from nearly the moment of creation to the end of time, and even a journey spiraling from the deepest space down into a ravenous black hole, passing through the point of no return of the event horizon, down, down, down, to nearly the center, where the singularity lurks. Deep into a quantum world Bridging the quantum world to relativity The water analogy