Chronology of the universe 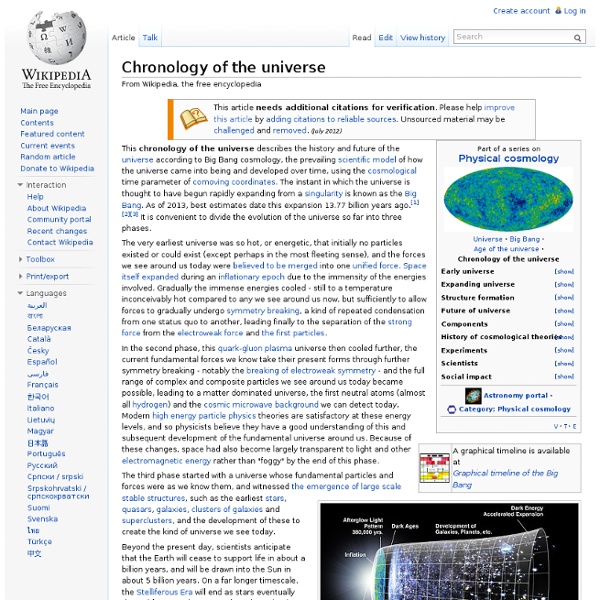 Illustration of evolution of the universe from the Big Bang (left). In this diagram, the universe is represented in two dimensions and the third (horizontal) dimension is time, increasing to the right. Summary[edit] The very earliest universe was so hot, or energetic, that initially no particles existed or could exist (except perhaps in the most fleeting sense), and the forces we see around us today were believed to be merged into one unified force. Space-time itself expanded during an inflationary epoch due to the immensity of the energies involved. The third phase started after a short dark age with a universe whose fundamental particles and forces were as we know them, and witnessed the emergence of large scale stable structures, such as the earliest stars, quasars, galaxies, clusters of galaxies and superclusters, and the development of these to create the kind of universe we see today. Very early universe[edit] Planck epoch[edit] Up to 10–43 second after the Big Bang Baryogenesis[edit] Related:  The Universe: Cosmology, Astronomy & Astrobiology

Toward a Type 1 civilization Our civilization is fast approaching a tipping point. Humans will need to make the transition from nonrenewable fossil fuels as the primary source of our energy to renewable energy sources that will allow us to flourish into the future. Failure to make that transformation will doom us to the endless political machinations and economic conflicts that have plagued civilization for the last half-millennium. We need new technologies to be sure, but without evolved political and economic systems, we cannot become what we must. In a 1964 article on searching for extraterrestrial civilizations, the Soviet astronomer Nikolai Kardashev suggested using radio telescopes to detect energy signals from other solar systems in which there might be civilizations of three levels of advancement: Type 1 can harness all of the energy of its home planet; Type 2 can harvest all of the power of its sun; and Type 3 can master the energy from its entire galaxy. Fossil fuels won't get us there. We are close.

Welcome - The Flow of History Big Bang nucleosynthesis In physical cosmology, Big Bang nucleosynthesis (abbreviated BBN, also known as primordial nucleosynthesis) refers to the production of nuclei other than those of the lightest isotope of hydrogen during the early phases of the universe. Primordial nucleosynthesis is believed by most cosmologists to have taken place from 10 seconds to 20 minutes after the Big Bang, and is calculated to be responsible for the formation of most of the universe's helium as isotope He-4, along with small amounts of deuterium (H-2 or D), the helium isotope He-3, and a very small amount of the lithium isotope Li-7. In addition to these stable nuclei, two unstable or radioactive isotopes were also produced: tritium or H-3; and beryllium-7 (Be-7); but these unstable isotopes later decayed into He-3 and Li-7, as above. Essentially all of the elements that are heavier than lithium were created much later, by stellar nucleosynthesis in evolving and exploding stars. Characteristics[edit] Important parameters[edit]

The Stanford Astrobiology Course Welcome and introduction to website Astrobiology is at once one of the newest of scientific meta-disciplines, while at the same time encompassing some of our oldest and most profound questions. Beyond strictly utilitarian concerns, such as “what is for dinner?” and leaving offspring, asking the three great questions of astrobiology seems to be embedded in what it means to be human. While these questions are ancient questions, we now have the technological tools to grapple with them at a whole new scientific level. So what is Astrobiology? 1. 2. 3. To fulfill the promise of Astrobiology requires a tool not normally in many scientists’ arsenal: space exploration. This website has grown out of the oldest such class in the country, Stanford’s “Astrobiology and Space Exploration” course. This website arises as a complement to the lectures available on iTunesU and the many other wonderful astrobiology and space exploration related web sites. Where do we come from? Where are we going?

7 Beautiful Web Based Timeline Using Javascript and CSS A timeline is a way of displaying a list of events in chronological order, sometimes described as a project artifact . It is typically a graphic design showing a long bar labeled with dates alongside itself and (usually) events labeled on points where they would have happened. Here is the collection of 7 cool web based timelines which can blew away your mind. 1. With this widget, you can make beautiful interactive timelines like the one below. 2. Timeglider JS is a zooming, panning data-driven timeline widget written in Javascript— great for history projects, project planning, and more. 3. 4. TikiToki is a web app that makes it dead easy for people to create interactive multimedia timelines in their browsers. 5. 6. 7. Simple and clean looking timeline with some very straight forward markup.

The Dominant Life Form in the Cosmos Is Probably Superintelligent Robots prophesied the rise of artificial intelligence Susan Schneider, a professor of philosophy at the University of Connecticut, is one who has. She joins a handful of astronomers, including Seth Shostak, director of NASA’s Search for Extraterrestrial Intelligence, or SETI, program, NASA Astrobiologist Paul Davies, and Library of Congress Chair in Astrobiology Stephen Dick in espousing the view that the dominant intelligence in the cosmos is probably artificial. In her paper “Alien Minds," written for a forthcoming NASA publication, Schneider describes why alien life forms are likely to be synthetic, and how such creatures might think. “Most people have an iconic idea of aliens as these biological creatures, but that doesn’t make any sense from a timescale argument,” Shostak told me. With the latest updates from NASA’s Kepler mission showing potentially habitable worlds strewn across the galaxy, it’s becoming harder and harder to assert that we’re alone in the universe. I hope she’s right.

On the hunt for universal intelligence How do you use a scientific method to measure the intelligence of a human being, an animal, a machine or an extra-terrestrial? So far this has not been possible, but a team of Spanish and Australian researchers have taken a first step towards this by presenting the foundations to be used as a basis for this method in the journal Artificial Intelligence, and have also put forward a new intelligence test. "We have developed an 'anytime' intelligence test, in other words a test that can be interrupted at any time, but that gives a more accurate idea of the intelligence of the test subject if there is a longer time available in which to carry it out", José Hernández-Orallo, a researcher at the Polytechnic University of Valencia (UPV), tells SINC. This is just one of the many determining factors of the universal intelligence test. The researcher, along with his colleague David L. Use in artificial intelligence Explore further: Ant colonies help evacuees in disaster zones

Draw Zoomable Time Line With Scroll Bars On Html5 Canvas How Self-Replicating Spacecraft Could Take Over the Galaxy I'm going to re-post here a previous comment I made on this subject, because I think it's worth repeating. Any alien civilization that is sufficiently developed enough to span the cosmos, will be so far advanced from us, that we would not be able to even comprehend their technology and in turn they probably wouldn't even recognise us as a sentient intelligent species. I've always found the "Well if there are aliens why haven't they said hello?" argument to be far too arrogant. There are islands all over the oceans of our world that are nothing more than rocks sticking out of the water with bacteria on them. That's us, the barren rock. The alien probes have probably been through out solar system many times (we'd never know) looked at our skyscrapers, cities and agriculture.

Do Robots Rule the Galaxy? Astronomy news this week bolstered the idea that the seeds of life are all over our solar system. NASA's MESSENGER spacecraft identified carbon compounds at Mercury's poles. Probing nearly 65 feet beneath the icy surface of a remote Antarctic lake, scientists uncovered a community of bacteria existing in one of Earth's darkest, saltiest and coldest habitats. And the dune buggy Mars Science Lab is beginning to look for carbon in soil samples. But the rulers of our galaxy may have brains made of the semiconductor materials silicon, germanium and gallium. In other words, they are artificially intelligent machines that have no use — or patience — for entities whose ancestors slowly crawled out of the mud onto primeval shores. PHOTOS: Alien Robots That Left Their Mark on Mars The idea of malevolent robots subjugating and killing off humans has been the staple of numerous science fiction books and movies. My favorite self-parody of this idea is the 1970 film "Colossus: the Forbin Project."