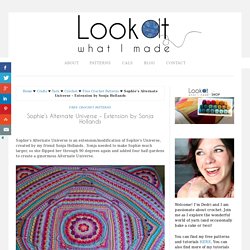 Sonja needed to make Sophie much larger, so she flipped her through 90 degrees again and added four half-gardens to create a ginormous Alternate Universe. Photos by Sonja Hollands I am delighted to present you with Sonja’s instructions for creating your own Alternate Universe. Before we start, I would like Sonja to share a little bit about her journey, but before we get to that, I need to tell you one very important thing: This is NOT a complete pattern, but an add-on. You will still need the instructions for Sophie’s Universe in order to create this ‘Alternate Universe’. That having been said, Sonja and I have spent the majority of the past 2 weeks trying to make her instructions as easy as possible to follow.

If you are in a hurry, scroll past the interview to ‘Instructions for Creating Sophie’s Alternate Universe‘ at the bottom of this post. How to Crochet: Standing Single Crochet. This is a quick tutorial for making the standing single crochet. 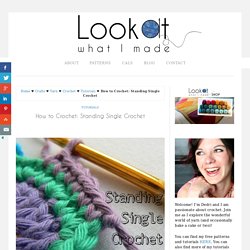 Please note that this is only applicable to the standing SINGLE crochet. For an in-depth look at standing double crochet stitches, please see this tutorial by Tamara from Moogly. The standing single crochet is used at the beginning of a new round when joining new yarn. It can be used instead of the traditional (sl st, ch-1, sc) join and gives a neater finish. I first came across the term “standing” stitch in Tamara’s tutorial (linked above), which covers the standing double crochet and is well worth a look! So let’s dive in and see what the standing single crochet is all about. How to Make a Standing Single Crochet Stitch Start with a slip knot already on your hook. You see, it is really quite simple. Adding new yarn like this instead of in the traditional (sl st, ch 1, sc) way, you don’t end up with any kind of visible slip stitch at the beginning of the round. 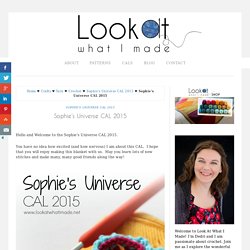 You have no idea how excited (and how nervous) I am about this CAL. I hope that you will enjoy making this blanket with us. May you learn lots of new stitches and make many, many good friends along the way! Those of you who followed the Block a Week CAL 2014 will know that the CAL (crochet-along) was hosted by the Official CCC Social Group on Facebook (you have to be logged into Facebook in order to access the link to the group).

The mastermind behind the CAL was my good friend Kimberly Slifer. IMPORTANT: Please do not copy, reproduce, or distribute this pattern in part or as a whole. Thank you, Dedri The CAL started on the 18th of January 2015, and ran for 20 weeks. Please note that this project is a continuous, square blanket, which has been specifically designed for this CAL, not a lot of individual squares. Index Resources. My Sophies Universe CAL. FINISHED! 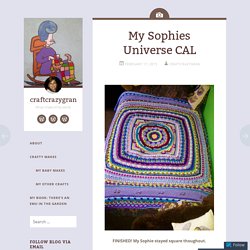 My Sophie stayed square thoughout. I am loving this CAL – Crochet-A-Long! It is superbly designed and tutorialised (Is that a word?) By Dedri Uys of Look At What I Made. The CAL will finish at the end of May 2015. here is the link: I am crocheting this for my Granddaughter, Stacy. I have decided to do a second one in cotton thread, in white, variegated pink/purple and variegated blues. UPDATE: April 2015 I missed quite a few, but I have started teaching crochet classes, and am making 4 blankets at the same time! 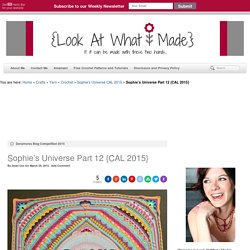 We almost have a square again! Last week I asked you to share photos of Sophie with your other hobbies. This request was inspired by Anette Von Dottie’s post in the Official CCC Social Group. Anette has a beautiful blog called Aarhuskalder. It is in Danish, but her photos are so pretty that it is worth just scrolling through. Below you can see Anette’s beautiful Sophie and colouring in. 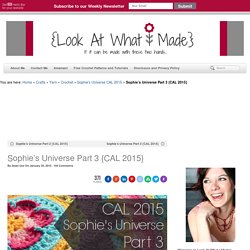 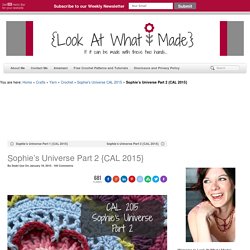 All Rights Reserved. Special design credit to Chris Simon for allowing me to use a modified version of her Lace Petals flower. Resources Translations Materials For the purposes of this tutorial I am using Scheepjeswol Cotton 8 (available from Deramores) and a 3.25 mm Clover Amour Crochet Hook Please Note: In some of the photos I have photographed the Softfun or Stonewashed XL instead of the Cotton 8 to make it easier for you to see the stitches.