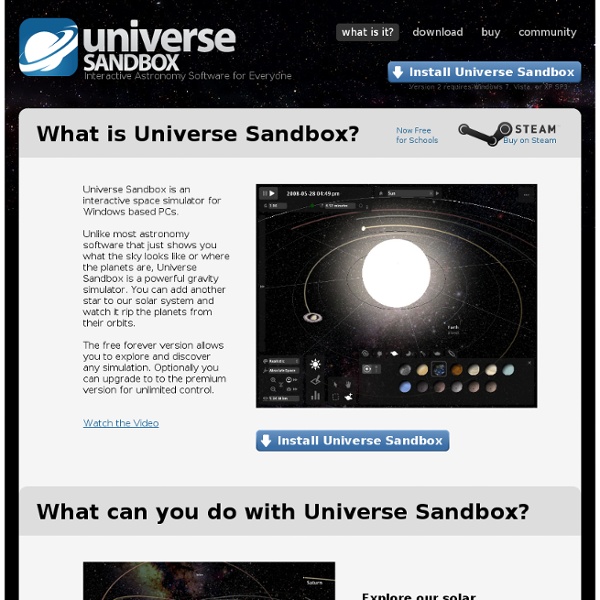 Universe Sandbox is an interactive space simulator for Windows based PCs. Unlike most astronomy software that just shows you what the sky looks like or where the planets are, Universe Sandbox is a powerful gravity simulator. You can add another star to our solar system and watch it rip the planets from their orbits. The free forever version allows you to explore and discover any simulation. Optionally you can upgrade to to the premium version for unlimited control. Watch the Video

Your Sky by John Walker Welcome to Your Sky, the interactive planetarium of the Web. You can produce maps in the forms described below for any time and date, viewpoint, and observing location. Magnifying the Universe Embed this infographic on your site! <iframe width="500" height="323" scrolling="no" src=" frameborder="0" allowfullscreen></iframe><br />Copyright 2012. <a href=" the Universe</a> by <a href=" Sleuth</a>. The above is an interactive infographic. Canister lets you add water (or bodily fluids) to recharge batteries SiGNa Chemistry Inc. is launching a hydrogen-producing cartridge, the mobile-H2™, that will work with a portable, pocket-sized fuel cell charger to provide instant power for cell phones and other mobile devices. You simply add water to the cartridge, and the device will charge depleted batteries on the go. For further convenience, any water will do (even waste water). Unlike solar battery chargers, you don’t need to worry about getting enough sunlight. According to its press materials, these cartridges provide a steady level of power from beginning to end.

Space.com Buy This Infographic as a Full-Size Poster Astronomers have discovered more than 700 alien planets beyond the solar system, and the count is rising all the time. Some are large and hot, and others are smaller and cooler, but scientists are still on the lookout for an Earth twin. They just got closer, with the announcement Dec. 5 of a planet found by NASA's Kepler space telescope to lie in the habitable zone around its star where liquid water, and perhaps life, could exist. You can purchase a 20"x60" poster of this SPACE.com infographic on high-quality 14G Photo Paper from the SPACE.com store here: Buy Poster

Your Age on Other Worlds Want to melt those years away? Travel to an outer planet! <div class="js-required"><hr> This Page requires a Javascript capable browser <hr></div> microscope photos These microscope pictures are taken from the book ‘ Microcosmos’, created by Brandon Brill . This book includes many scanning electron microscope (SEM) images of insects, human body parts and household items. These are the most amazing images of what is too small to see with the naked eye. 01 – A wood or heathland Ant, Formica fusca, holding a microchip 02 – The surface of an Erasable Programmable Read-Only Memory silicon microchip

The end of the net as we know it Posted on 21 Jan 2011 at 13:34 ISPs are threatening to cripple websites that don't pay them first. Barry Collins fears a disastrous end to net neutrality You flip open your laptop, click on the BBC iPlayer bookmark and press Play on the latest episode of QI. But instead of that tedious, plinky-plonky theme tune droning out of your laptop’s speakers, you’re left staring at the whirring, circular icon as the video buffers and buffers and buffers... That’s odd. SIMBAD Astronomical Database SIMBAD on the Web is the WWW interface to the SIMBAD database. It offers the following functionalities: Query by identifiers and around identifiers Query by coordinates, specifying the radius and the equinox Query by bibcode and partial bibcode Sampling with a set of physical criteria Query by lists of objects, coordinates or bibcodes Display charts for list of objects resulting from coordinates query Moreover, the interface provides links with many other data services : Links to the other CDS services: Tables in VizieR, giving access to the whole catalogued data, links to Aladin images, surveys and observatory logs.

40 technologies to watch in 2011 If the popular misreading of Mayan mythology is correct, we have fewer than two more years left on this Earth. That leaves precious little time for the tech industry to develop and perfect of all the cool technologies that sci-fi authors have dreamed up over the years. Still, while a December 2012 apocalypse may spell doom for the commercial viability of hovercars, it doesn't mean that the next couple of years in tech will be dull — quite the contrary. 2011 is already shaping up to be a banner year for tech and web innovation. Below is a list of over 40 websites, apps, companies, gadgets and technologies that the editors of Mashable think that you should keep an eye on over the coming year. It Does Something A Lot Weirder And now you all understand why Stephen Hawking is widely acknowledged as a genius. Until his proposal of black hole evaporation by virtual particles, no one had then made such a strong link between quantum mechanics and general relativity. Much however still remains to be done. I'm interested in why the hole preferentially chooses to absorb antiparticles. If it absorbs an average of particles/antiparticles there would be no net energy gain or loss due to pair production over time.