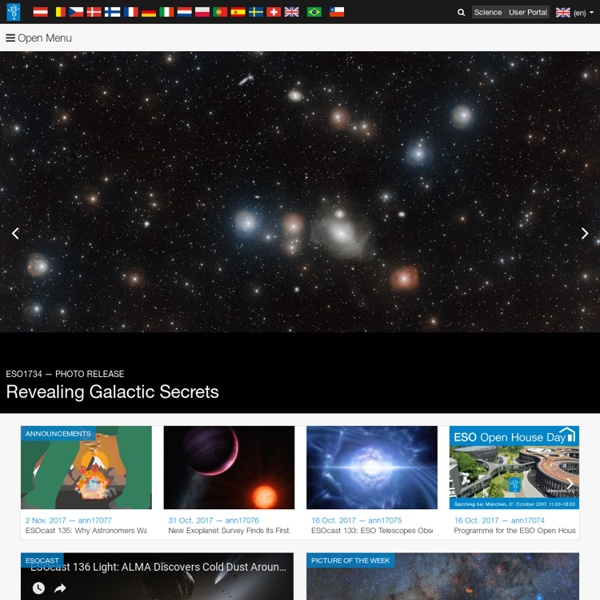 eso1513 — Science Release Complex Organic Molecules Discovered in Infant Star System For the first time, astronomers have detected the presence of complex organic molecules, the building blocks of life, in a protoplanetary disc surrounding a young star. The discovery, made with the Atacama Large Millimeter/submillimeter Array (ALMA), reaffirms that the conditions that spawned the Earth and Sun are not unique in the Universe. The results are published in the 9 April 2015 issue of the journal Nature.

Astronomers aim to 'capture' a black hole French astronomer Pierre-Simon Laplace predicted the existence of black holes way back in 1796, but we’ve yet to capture one on camera. The Event Horizon Telescope will bring together astronomy’s greatest radio telescopes in an attempt ‘photograph’ the supermassive black hole at the heart of the Milky Way Where would science fiction be without black holes? Weekend Visits to Paranal Registering for a Guided Tour Visit the Paranal from your armchair with our Virtual Tours. Click on the thumbnail to experience a 360° visit. Guided tours for tourists and the general public are offered on every Saturday. The guided tours are free of charge, but registration is required as there is limited space. Large groups are asked to register as far in advance as possible.

Stephen Hawking's Time Machine In an article in the Daily Mail this week, British cosmologist Stephen Hawking outlined not one, but three, theoretically realistic ideas for traveling through time, one of which he says is even practical. The Fourth Dimension First, though, you have to get your head around the notion that time is a dimension, just like width, height and length. Hawking uses the example of driving in your car: You go forward. That’s one direction. You turn left or right, that’s a second. FAQ About Travel in Chile From Tim's Point of View What about food and drink? Restaurant food is great if you look for "platos típicos" or, a favorite of mine, just get the daily special (called "menú del día" or sometimes oferta). The special is usually filling, good, and cheap.

Jodrell Bank - The Night Sky Highlights of the Month April - Mars at Opposition. Image NASA. Top 10 Modern Space Videos Top 10 Modern Space Videos Share on Facebook0 inShare0 Weightlessness, dark matter, and mind-blowing telescope images are great reasons to be excited about space exploration. Here are some of the best videos from our most recent decade of space travel. 10.

Girl’s guide to falling in love – in Chile! There are lots of reasons to visit Chile. A stunning and one of the most diversified landscapes is one of them. In about 4000km of coast offering the driest desert of the earth (the Atacama desert), a region called Lake District with volcanos, deep blue lakes and silent green forests and awe-inspiring Patagonia with its rain forests, fjords and glaciers, you might well find your very own piece of paradise. But apparently that alone is not attracting enough tourists.

When Light Just Isn’t Fast Enough Take a speed of light trip across the solar system starting at the Sun We’ve heard it over and over. There’s nothing faster than the speed of light. Chile's Atacama Desert -World's Space-Observatory Mecca The lunar landscapes of Chile's Atacama Desert, which stretches for about 650 miles along the Pacific Ocean to the Peruvian Border, is generally considered the driest place on earth, wedged between the rain shadows of the Andes to the east and the coast ranges to the west, while the cold Humboldt Current off the coast suppresses evaporation from the ocean. There are places in the Atacama where there has been no recorded or observed rainfall in the 400+ years since the Spaniards first arrived. The Atacama Desert's dry climate and 5,600-meter (about 3.5 miles) altitude make it a unique and ideal mecca for both ground-based reflector and far-infrared astronomy.

Hubble just discovered a moon hiding at the back of our Solar System A few weeks ago, a huge galaxy orbiting our own appeared seemingly out of nowhere. And now, astronomers have discovered a brand new moon hiding in plain sight at the outskirts of our very own Solar System. The moon has been spotted orbiting the second brightest icy dwarf planet, Makemake, way out past Pluto in the Kuiper belt, and it's around 161 km (100 miles) in diameter. So what's going on?