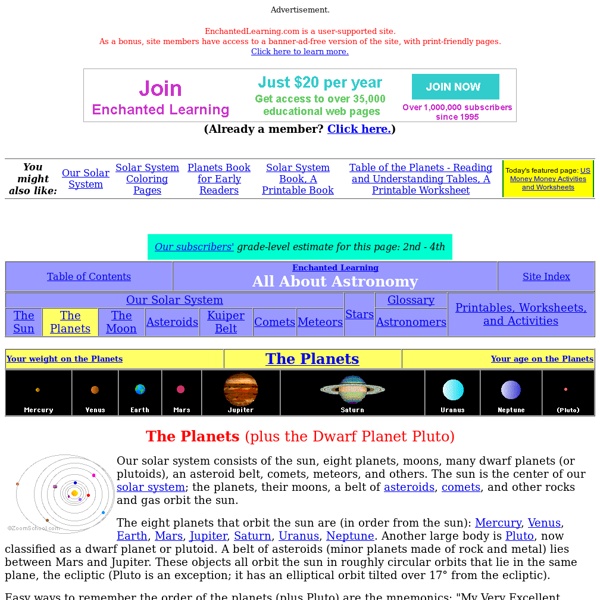 Advertisement. EnchantedLearning.com is a user-supported site. As a bonus, site members have access to a banner-ad-free version of the site, with print-friendly pages.Click here to learn more. (Already a member? The Planets (plus the Dwarf Planet Pluto) Our solar system consists of the sun, eight planets, moons, many dwarf planets (or plutoids), an asteroid belt, comets, meteors, and others. The eight planets that orbit the sun are (in order from the sun): Mercury, Venus, Earth, Mars, Jupiter, Saturn, Uranus, Neptune. Easy ways to remember the order of the planets (plus Pluto) are the mnemonics: "My Very Excellent Mother Just Sent Us Nine Pizzas" and "My Very Easy Method Just Simplifies Us Naming Planets" The first letter of each of these words represents a planet - in the correct order. The largest planet is Jupiter. The inner planets are: Mercury, Venus, Earth, and Mars. Generally, the farther from the Sun, the cooler the planet. Density of the Planets The Earth is the densest planet.