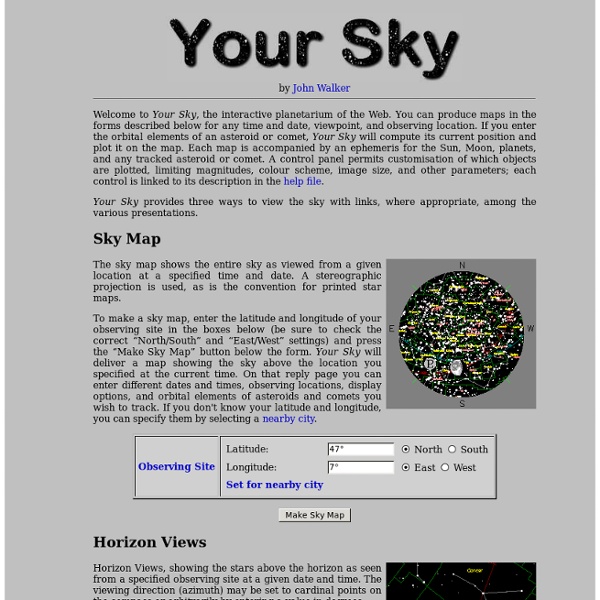 by John Walker Welcome to Your Sky, the interactive planetarium of the Web. You can produce maps in the forms described below for any time and date, viewpoint, and observing location. If you enter the orbital elements of an asteroid or comet, Your Sky will compute its current position and plot it on the map. Each map is accompanied by an ephemeris for the Sun, Moon, planets, and any tracked asteroid or comet. A control panel permits customisation of which objects are plotted, limiting magnitudes, colour scheme, image size, and other parameters; each control is linked to its description in the help file. Your Sky provides three ways to view the sky with links, where appropriate, among the various presentations. Sky Map The sky map shows the entire sky as viewed from a given location at a specified time and date. Horizon Views Horizon Views, showing the stars above the horizon as seen from a specified observing site at a given date and time. The Virtual Telescope Your Sky help Related Software Related:  Universe & Multiverse

Space.com Buy This Infographic as a Full-Size Poster Astronomers have discovered more than 700 alien planets beyond the solar system, and the count is rising all the time. Some are large and hot, and others are smaller and cooler, but scientists are still on the lookout for an Earth twin. They just got closer, with the announcement Dec. 5 of a planet found by NASA's Kepler space telescope to lie in the habitable zone around its star where liquid water, and perhaps life, could exist. You can purchase a 20"x60" poster of this SPACE.com infographic on high-quality 14G Photo Paper from the SPACE.com store here: Buy Poster Embed: Paste the code below into your site. <a href=" alt="Astronomers searching for another Earth are getting closer, thanks to recent discoveries by the Kepler space telescope. " src="

Directory of Royal Genealogical Data At this site I have a database containing the genealogy of the British Royal family and those linked to it via blood or marriage relationships. It contains, in fact, the genealogy of almost every ruling house in the western world because of the intermarriage that took place between them at some time or another. There are in excess of 30,000 individuals from the earliest times to the present in the database. The date spread of the records is available for those interested, as well as statistics on the ten most popular monarchs , and the most prolific readers top 10. The data may be browsed in several different ways. A new (July 99) feature is a list of chronological implausibilities identified by an automatic scan of the data. For further details on sources see the bibliography and also User Contributed Data Files . You may also find the Answers to Frequestly Asked Questions useful. This work is Copyright © 1994-2005 Brian C Tompsett. Brian Tompsett Department of Computer Science Addendum:

Terraforming Transplanting seas to inland ocean lakes? A good idea for the Middle East? The two century-old and highly respected Japanese engineering giant Shimizu has hatched a wild and crazy proposal to rehabilitate the desert for human use. Their idea is to move vast amounts of seawater along canals that would track deep into desert landmasses to create a series of connected huge inland seas measuring 30 km (18 miles) across. Each seawater lake with its city would spaced apart along connecting canals measuring 150 km (93 miles) between each seawater lake city. A similarly massive water project initiated by Libya transfers fresh water from a distant underground aquifer. By contrast, this project uses seawater, already on the surface. To prevent it from soaking down into the sand the water in the lakes would be retained by a continuous, two-meter-thick underground wall that reaches down to the impermeable layer, (presumably protected with rebar against earthquake). Image:Shimizu Corporation

Hubble's Panoramic View Several million stars are vying for attention in this NASA/ESA Hubble Space Telescope image of a raucous stellar breeding ground in 30 Doradus, located in the heart of the Tarantula nebula. 30 Doradus is the brightest star-forming region in our galactic neighbourhood and home to the most massive stars ever seen. The nebula resides 170 000 light-years away in the Large Magellanic Cloud, a small, satellite galaxy of our Milky Way. No known star-forming region in our galaxy is as large or as prolific as 30 Doradus. The image comprises one of the largest mosaics ever assembled from Hubble photos and consists of observations taken by Hubble’s Wide Field Camera 3 and Advanced Camera for Surveys, combined with observations from the European Southern Observatory’s MPG/ESO 2.2-metre telescope that trace the location of glowing hydrogen and oxygen. The image is being released to celebrate Hubble’s 22nd anniversary. The colours come from the glowing hot gas that dominates regions of the image. Notes

Ulster Ancestry Surprising Sea Slug Is Half-plant, Half-animal A green sea slug appears to be part animal, part plant. It's the first critter discovered to produce the plant pigment chlorophyll. The sneaky slugs seem to have stolen the genes that enable this skill from algae that they've eaten. With their contraband genes, the slugs can carry out photosynthesis — the process plants use to convert sunlight into energy. "They can make their energy-containing molecules without having to eat anything," said Sidney Pierce, a biologist at the University of South Florida in Tampa. Pierce has been studying the unique creatures, officially called Elysia chlorotica, for about 20 years. "This is the first time that multicellar animals have been able to produce chlorophyll," Pierce told LiveScience. The sea slugs live in salt marshes in New England and Canada. "We collect them and we keep them in aquaria for months," Pierce said. The slugs accomplishment is quite a feat, and scientists aren't yet sure how the animals actually appropriate the genes they need.

The Worlds of David Darling ScotlandsPeople Nothingness: Why nothing matters Our pursuit of naught provides profound insights into the nature of reality Read more: "The nature of nothingness" SHAKESPEARE had it right, even in ways he couldn't have imagined. For centuries, scientists have indeed been making much ado about nothing - and with good reason. The modern story of nothing began with a thought experiment dreamed up by Isaac Newton. With that answer, Newton made something out of nothing. The discovery of quantum mechanics took the story of nothing further still. This year's Nobel prize in physics recognises the power of nothing on cosmic scales. The Large Hadron Collider near Geneva, the world's most powerful particle accelerator, is also in the business of probing nothing. Since the time of Newton, we have thus gradually realised that nature has masked the identity of nothing with a Shakespearian deftness. Profile New Scientist Not just a website! More From New Scientist Stuff: A few of your favourite things (New Scientist) More from the web (YouTube)