He was involved in storing, curating and cataloguing Apollo images and moon rocks.

Sirius Disclosure. Dr. Steven Greer - Nov. 21, 2015 - How the Secret Government Works: The Most Explosive Expose - HD. Are You a Wanderer or an ET Soul? Cosmic Disclosure S01E12 - 4shared.com download free - 1. David Wilcock Major Update 11-25-15: DISCLOSURE SHOWDOWN: The War For The Truth – Divine Cosmos. Amazing and very comprehensive update from David Wilcock a few days ago…. this is a must-read to get a behind-the-scenes view on what is really going on in our world today. 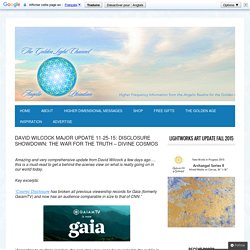 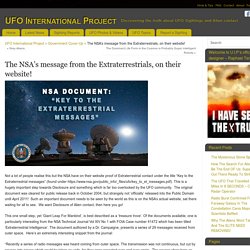 The original document was cleared for public release back in October 2004, but strangely not ‘officially’ released into the Public Domain until April 2011! Such an important document needs to be seen by the world as this is on the NSA’s actual website, sat there waiting for all to see. We want Disclosure of Alien contact, then here you go! This one small step, yet ‘Giant Leap For Mankind’, is best described as a ‘treasure trove’. Of the documents available, one is particularly interesting from the NSA Technical Journal Vol XIV No 1 with FOIA Case number 41472 which has been titled ‘Extraterrestrial Intelligence’.

“Recently a series of radio messages was heard coming from outer space. Dr. Who is Dr. Dr. NASA Brings Scientists & Theologians Together To Prepare World For Extraterrestrial Contact. Soul Surfing – Spiritual World News Blog. Incroyables Nouvelles Révélations de Paul Hellyer (Mai 2015) :"nous n'avons plus que quelques mois" Former Canada defence minister claims governments are HIDING aliens. Paul Hellyer served as Canada's defence minister from 1963 to 1967He made the comments during a speech at the University of CalgaryHellyer says aliens have 'been visiting our planet for thousands of years'Many walk among us, he claims, but it can be difficult to tell them apart By Ellie Zolfagharifard For Dailymail.com Published: 19:59 GMT, 22 April 2015 | Updated: 17:44 GMT, 23 April 2015. 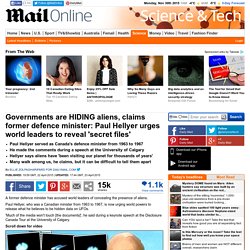 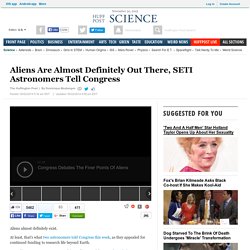 At least, that's what two astronomers told Congress this week, as they appealed for continued funding to research life beyond Earth. According to ABC News, Dan Werthimer, director of the SETI [search for extraterrestrial intelligence] Research Center at the University of California, Berkeley, told the House Committee on Science, Space and Technology Wednesday that the possibility of extraterrestrial microbial life is "close to 100 percent.

" Aliens? Yes Please. UFOs? No Thanks. The Search for Extraterrestrial Intelligence, or SETI, may becoming more mainstream, as evidenced by this week’s House Science and Technology Committee hearing, which included testimony by two well-known SETI hunters, Seth Shostak and Dan Werthimer. 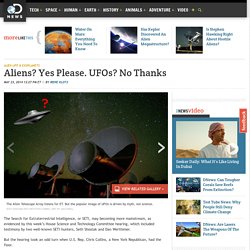 But the hearing took an odd turn when U.S. Rep. Chris Collins, a New York Republican, had the floor. 13 Ways to Hunt Intelligent Aliens “I think I might ask the question everyone in this room wants to ask,” Collins said. The television show, broadcast on The History Channel, explores purported extraterrestrials’ visits to Earth over millions of years. 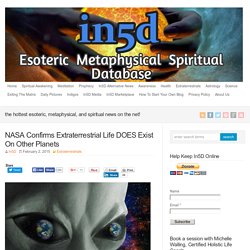 That’s the amazing news that space boffins at NASA have confirmed this week. The US space agency has spoken for the first time about life on other planets and they are certain it DOES exist. Having made the astonishing claims during a conference in Washington, NASA now hopes to scour the universe in hope of finding these alien life-forms. And they are planning to use some of the world’s most advanced technology to produce a road map of space. NASA has already discovered more than 5,000 planets that could sustain life and many more are likely to be found.

Sara Seager – Professor of Planetary Science and Physics at the Massachusetts Institute of Technology in Cambridge, Massachusetts – said: “Sometime in the near future, people will be able to point to a star and say, ‘that star has a planet like Earth’.” “Astronomers think it is very likely that every single star in our Milky Way galaxy has at least one planet.” NASA Confirms Extraterrestrial Life DOES Exist On Other Planets. Wikileaks Cables Confirm Existence of Extraterrestrial Life. We're creating viewer supported news. 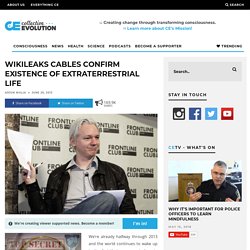 Become a member! We’re already halfway through 2013 and the world continues to wake up to the fact that we are not alone in the universe. Just this year, we’ve seen a tremendous step forward regarding UFO disclosure. In early May, researchers, activists, political leaders, and high ranking military/agency personnel from around the world testified to the reality of the UFO/extraterrestrial phenomenon in front of several former United States members of Congress. To watch an interview with former 2008 presidential candidate and ex-congressman Mike Gravel (who participated in the hearings), click here.