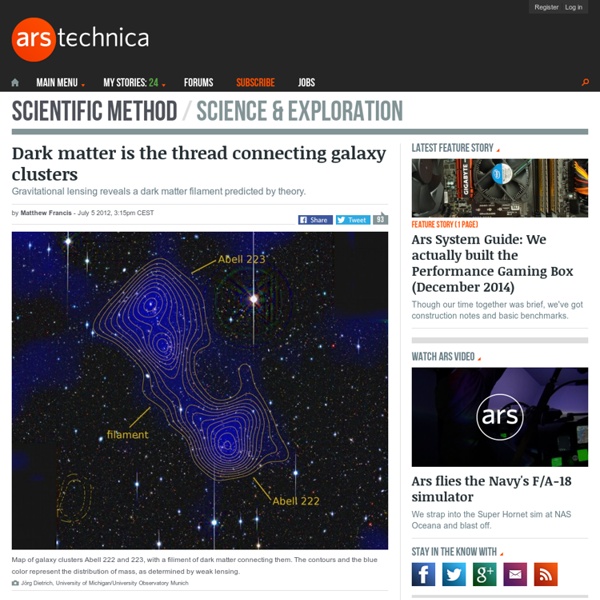 Simulations of the Universe on the largest scales show an unexpected resemblance to nerve cells in the human brain, with galaxy clusters playing the role of the cell body and thinner filaments of matter linking them like axons. Galaxy surveys (such as the Sloan Digital Sky Survey, or SDSS) show that galaxies do cluster like our simulations predict. But the filaments that should connect them have been harder to find. Most of the mass in the Universe is dark matter—material that neither emits nor absorbs light—and filaments are predicted to be mostly dark matter: no galaxies, little hot gas. Einstein's general theory of relativity, however, tells us mass affects the path of light, and a group of astronomers have identified a dark matter filament by measuring this effect. These observations lend strong support to the theory that the Universe is built on a web of dark matter that has drawn in visible structures like galaxies and clusters. Related:  Física y Química • The Universe • amazing

Periodic Table of the Elements by WebElements Holes in Space Aug 21, 2008 Holes in Space In the gravitational model of the universe, "dark matter" attraction pulls galaxies into filaments. Birkeland currents could be a better explanation. "Not only has no one ever found a void this big, but we never even expected to find one this size," said researcher Lawrence Rudnick of the University of Minnesota. The hole isn't really a hole, it is an area of space where the temperature of the Cosmic Microwave Background (CMB) is lower than the surrounding region. The "noise" was later to be called the "remnant signal from the beginning of the universe" because it appeared to be radiating uniformly at a microwave frequency corresponding to a temperature of 2.7 degrees above absolute zero (-270.45 degrees centigrade). Now, after analyzing data from the Very Large Array radio telescope in New Mexico, a drop in temperature has been detected. The Electric Universe (EU) theory has an entirely different way of addressing these matters.

13 unsolved mysteries that still need answers in 2015 From a missing plane to a vast city hidden beneath Earth, 2014 left many stones unturned. Although we made many discoveries over the course of 12 months, some of them led to even more puzzling questions. Will 2015 be the year our search for answers comes to an end? Here are the mysteries the world will try to unravel in the new year. What happened to the plane that vanished without a trace? A Malaysia Airlines flight vanished without a trace while en route from Kuala Lumpur to Beijing on March 8. After more than nine months, not a single piece of debris from MH370 has turned up. Why is Bardarbunga still erupting? Image: ARCTIC-IMAGES/CORBIS The eruption of the Bardarbunga volcano in Iceland began at the end of August and continues to this day. Bardarbunga created a 32 square mile lava field, which is the largest in Iceland since the Laki eruption in 1783, and the Icelandic Met Office says it is “probably the third largest lava field on Earth” since 1783. Image: Chicago Public Media

Universe in a box: formation of large-scale structure The movie stills pictured above illustrate the formation formation of clusters and large-scale filaments in the Cold Dark Matter model with dark energy. The frames show the evolution of structures in a 43 million parsecs (or 140 million light years) box from redshift of 30 to the present epoch (upper left z=30 to lower right z=0). Click to see the full-resolution version of each panel. At the initial epoch (z=30), when the age of the Universe was less than 1% of its current age, distribution of matter appears to be uniform. This is because the seed fluctuations are still fairly small. As time goes on, the fluctuations grow resulting in a wealth of structures from the smallest bright clumps which have sizes and masses similar to those of galaxies to the large filaments. You can download the movie as an MPEG movie: full size (10Mb), half size (1.3Mb)

Understanding the Fibonacci Sequence and Golden Ratio The Fibonacci Sequence The Fibonacci sequence is possibly the most simple recurrence relation occurring in nature. It is 0,1,1,2,3,5,8,13,21,34,55,89, 144… each number equals the sum of the two numbers before it, and the difference of the two numbers succeeding it. It is an infinite sequence which goes on forever as it develops. The Golden Ratio/Divine Ratio or Golden Mean - The quotient of any Fibonacci number and it’s predecessor approaches Phi, represented as ϕ (1.618), the Golden ratio. This iteration can continue both ways, infinitely. The Golden Ratio can be seen from a Chambered Nautilus to a Spiraling Galaxy The Golden Ratio can be applied to any number of geometric forms including circles, triangles, pyramids, prisms, and polygons. Sunflowers have a Golden Spiral seed arrangement. If you graph any number system, eventually patterns appear. Our universe and the numbers not only go on infinitely linear, but even it’s short segments have infinite points. Image source Phi Golden Ratio

untitled Planck unveils the Universe: First all-sky image provides new insight into how stars and galaxies form ESA's Planck mission has delivered its first all-sky image. It not only provides new insight into the way stars and galaxies form but also tells us how the Universe itself came to life after the Big Bang. "This is the moment that Planck was conceived for," says ESA Director of Science and Robotic Exploration, David Southwood. "We're not giving the answer. We are opening the door to an Eldorado where scientists can seek the nuggets that will lead to deeper understanding of how our Universe came to be and how it works now. The image itself and its remarkable quality is a tribute to the engineers who built and have operated Planck. From the closest portions of the Milky Way to the furthest reaches of space and time, the new all-sky Planck image is an extraordinary treasure chest of new data for astronomers. The main disc of our Galaxy runs across the centre of the image. Less spectacular but perhaps more intriguing is the mottled backdrop at the top and bottom.

The Proton Radius Prediction and Gravitational Control On December 20th 2012, Director of Research at The Hawaii Institute for Unified Physics and The Resonance Project Foundation, Nassim Haramein registered a copyright at the Library of Congress (click here to see a copy of the online entry) for his paper Quantum Gravity and the Holographic Mass (QGHM), which was eventually published in the peer-reviewed journal Physical Review & Research International. In his manuscript, Haramein utilized Planck spherical units (PSU) to describe the holographic vacuum fluctuations and extremely accurately predict the charge radius of the proton (the radius of the proton is typically more accurately described as the charge radius because all we can say about the proton is that there is a concentration of positive charge in that region of space which defines what we would think of as the surface of the proton). Since the 2013 muonic measurement of the proton occurred, the little particle has taken international attention by storm.

10 Incredible Chemical Reaction GIFs Explained We encounter thousands of chemical reactions every day: plants use them in photosynthesis, metals rust over time, and combustion reactions provide us with heat and light, among thousands of other daily uses. Chemical reactions occur when reactants transform into new substances, called products, through creating and breaking bonds between atoms. Sometimes the process creates some pretty wild effects. Check out our top 10 chemical reactions below: 1) Disintegration (Mercury Reacts with Aluminum) Image credit: Theodore Gray via Youtube When aluminum rusts, it creates a protective oxide layer that prevents the aluminum atoms underneath from further rusting. 2) Pharaoh's Serpent (Mercury (II) Thiocyanate Reacts with Oxygen) Image credit: tenkowal via Youtube The reaction depicted above, nicknamed the "Pharoah's Serpent," actually use to be a common classroom demonstration. 3) Explosive Gummi Bear (Heated Potassium Chlorate Reacts with a Gummi Bear) Image credit: ebaum via ebaumsworld.com

The Universe in a Box (Part 1) The evolution of the world may be compared to a display of fireworks that has just ended: some few red wisps, ashes and smoke. Standing on a cooled cinder, we see the slow fading of suns, and we try to recall the vanished brilliance of the origin of the worlds.- Georges Lemaître With the 2011 Nobel Prize in Physics going to three cosmologists, it seems appropriate to explore what the consensus is in modern cosmology. This is the first of a series of posts covering what we understand about our universe, using a particular viewpoint: a very large cubic box. By studying the contents of this box, how it changes in time, and how it relates to other, similar boxes, we can comprehend much of modern cosmology within a simple framework. The Cosmic Box Draw a large cubical box with Earth at its center, but with sides very far from us, far enough that the motion of the Sun around the galactic center is tiny. A simulated cosmic box 43 million parsecs on each side. Like this: Like Loading...