Life, The Universe & Everything 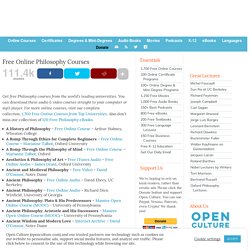 You can download these audio & video courses straight to your computer or mp3 player. For more online courses, visit our complete collection, 1,700 Free Online Courses from Top Universities. 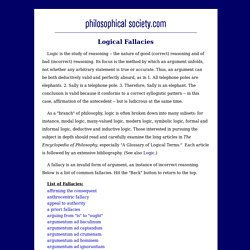 Its focus is the method by which an argument unfolds, not whether any arbitrary statement is true or accurate. Thus, an argument can be both deductively valid and perfectly absurd, as in 1. All telephone poles are elephants. 2. Sally is a telephone pole. 3. As a "branch" of philosophy, logic is often broken down into many subsets: for instance, modal logic, many-valued logic, modern logic, symbolic logic, formal and informal logic, deductive and inductive logic. 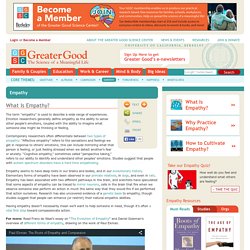 The term “empathy” is used to describe a wide range of experiences. Emotion researchers generally define empathy as the ability to sense other people’s emotions, coupled with the ability to imagine what someone else might be thinking or feeling. Contemporary researchers often differentiate between two types of empathy: “Affective empathy” refers to the sensations and feelings we get in response to others’ emotions; this can include mirroring what that person is feeling, or just feeling stressed when we detect another’s fear or anxiety. “Cognitive empathy,” sometimes called “perspective taking,” refers to our ability to identify and understand other peoples’ emotions. Studies suggest that people with autism spectrum disorders have a hard time empathizing. Empathy seems to have deep roots in our brains and bodies, and in our evolutionary history.

Why Practice Empathy? How to Cultivate Empathy? How Empathic Are You? Take the GGSC’s emotional intelligence quiz to find out! Suspect-communities-report-july2011.pdf. Kafkatrapping. Good causes sometimes have bad consequences. 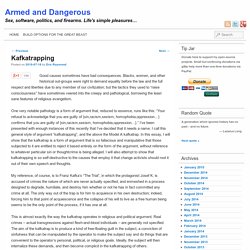 Blacks, women, and other historical out-groups were right to demand equality before the law and the full respect and liberties due to any member of our civilization; but the tactics they used to “raise consciousness” have sometimes veered into the creepy and pathological, borrowing the least sane features of religious evangelism. One very notable pathology is a form of argument that, reduced to essence, runs like this: “Your refusal to acknowledge that you are guilty of {sin,racism,sexism, homophobia,oppression…} confirms that you are guilty of {sin,racism,sexism, homophobia,oppression…}.” I’ve been presented with enough instances of this recently that I’ve decided that it needs a name. I call this general style of argument “kafkatrapping”, and the above the Model A kafkatrap.

This is almost exactly the way the kafkatrap operates in religious and political argument. Sometimes the kafkatrap is presented in less direct forms. Take Back Skepticism, Part I: The Elephant in the Room – ICBS Everywhere. I was planning a short rant about some ironically irrational arguments made by self-described rationalists at the World Atheist Convention in Dublin a couple of months ago. 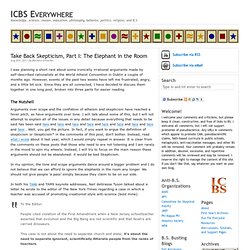 In my opinion, the tone and scope arguments dance around a bigger problem and I do not believe that we can afford to ignore the elephants in the room any longer. A Tiny Bit of Background. Ignoranti — Puttting the rant back in ignorant. What are the Fallacy Files? I began collecting and studying logical fallacies about twenty-five years ago, when I first became interested in logic. 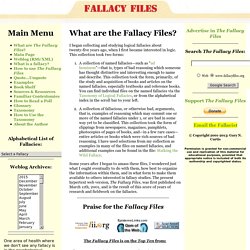 This collection took two forms: A collection of named fallacies—such as "ad hominem"—that is, types of bad reasoning which someone has thought distinctive and interesting enough to name and describe. How To Evaluate Health Information on the Internet: Questions and Answers. Key Points Any Web site should make it easy for you to learn who is responsible for the site and its information (see Question 1). 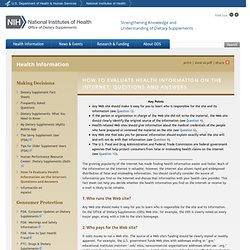 If the person or organization in charge of the Web site did not write the material, the Web site should clearly identify the original source of the information (see Question 4). A Concise Introduction to Logic - Patrick Hurley. Big History Project.