What are the Fallacy Files? 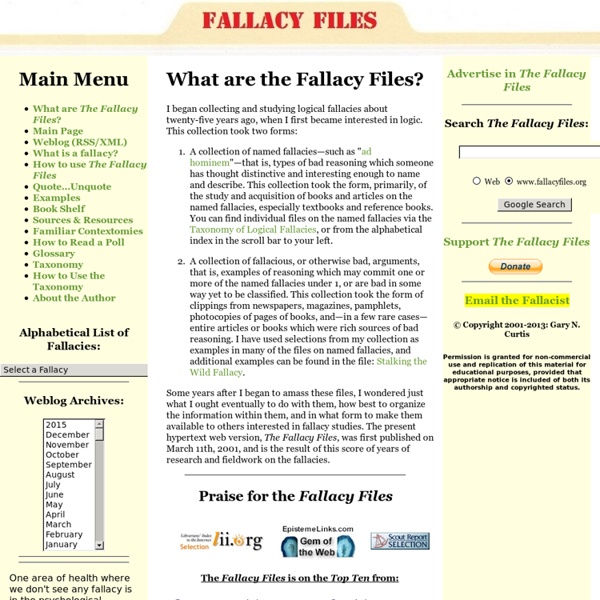 I began collecting and studying logical fallacies about twenty-five years ago, when I first became interested in logic. This collection took two forms: A collection of named fallacies—such as "ad hominem"—that is, types of bad reasoning which someone has thought distinctive and interesting enough to name and describe. Some years after I began to amass these files, I wondered just what I ought eventually to do with them, how best to organize the information within them, and in what form to make them available to others interested in fallacy studies. Praise for the Fallacy Files Contribute to the Fallacy Files You can contribute fallacies and examples to the files by sending them to me. The Fallacy Files is an Amazon Associate and every time you click on a link to Amazon and make a purchase, the Fallacy Files will receive a small commission. Email Policy Any examples sent to The Fallacy Files or questions asked may be used in entries, the weblog, or other features. Advertisement Policy

Fallacy A fallacy is the use of poor, or invalid, reasoning for the construction of an argument.[1][2] A fallacious argument may be deceptive by appearing to be better than it really is. Some fallacies are committed intentionally to manipulate or persuade by deception, while others are committed unintentionally due to carelessness or ignorance. Fallacies are commonly divided into "formal" and "informal". Formal fallacy[edit] Main article: Formal fallacy A formal fallacy is a common error of thinking that can neatly be expressed in standard system of logic.[1] An argument that is formally fallacious is rendered invalid due to a flaw in its logical structure. The presence of a formal fallacy in a deductive argument does not imply anything about the argument's premises or its conclusion. Common examples[edit] Aristotle's Fallacies[edit] Aristotle was the first to systematize logical errors into a list. Whately's grouping of fallacies[edit] Intentional fallacies[edit] Deductive fallacy[edit]

Fallacies Dr. Michael C. Labossiere, the author of a Macintosh tutorial named Fallacy Tutorial Pro 3.0, has kindly agreed to allow the text of his work to appear on the Nizkor site, as a Nizkor Feature. It remains © Copyright 1995 Michael C. Other sites that list and explain fallacies include: Constructing a Logical Argument Description of Fallacies In order to understand what a fallacy is, one must understand what an argument is. There are two main types of arguments: deductive and inductive. A fallacy is, very generally, an error in reasoning.