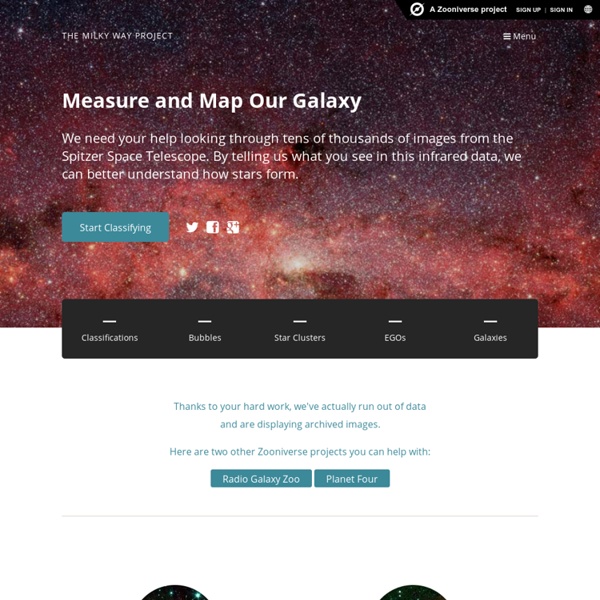 What are we looking at in these images? The images shown in the Milky Way Project were taken with a camera on board the Spitzer Space Telescope, as part of a survey called GLIMPSE, which aimed to map around 85% of the plane of the Milky Way galaxy. Over 440,000 images were taken for this survey. The galactic plane is where most of the young stars, gas and dust are located, and Spitzer is especially sensitive to those. The high resolution of the Spitzer infrared camera makes it possible to see fine detail in these clouds, and the bubbles we see are a great example of that. What part of the night sky are we seeing?

Your Age on Other Worlds Want to melt those years away? Travel to an outer planet! <div class="js-required"><hr> This Page requires a Javascript capable browser <hr></div> Fill in your birthdate below in the space indicated. (Note you must enter the year as a 4-digit number!) BOINC : calculez pour la science BOINC is a program that lets you donate your idle computer time to science projects like SETI@home, Climateprediction.net, Rosetta@home, World Community Grid, and many others. After installing BOINC on your computer, you can connect it to as many of these projects as you like. You may run this software on a computer only if you own the computer or have the permission of its owner.

Scientists Begin to Unravel Gigantic Space Ribbon This 3-D diagram shows the ribbon (grey) wrapping around our bubble-like heliosphere like a belt. Grey lines show the interstellar magnetic field lines astronomers believe creates this mysterious ribbon. Credit: Adler Planetarium/IBEX Team In 2009 astronomers using NASA’s Interstellar Boundary Explorer (IBEX) spacecraft accidentally came across a giant ribbon-like formation snaking its way across the boundary between our solar system and interstellar space. Ever since, its true nature has remained a riddle astronomers have been unable to solve. But now, they believe they are a step closer to explaining this bizarre structure.

Universality of circular polarization in star- and planet-forming regions: Implications for the origin of homochirality A research team with Jungmi KWON (GUAS/NAOJ) has performed deep imaging linear and circular polarimetry of the 'Cat's Paw Nebula' (NGC 6334) located in the constellation Scorpius, successfully detecting high degrees of circular polarization (CP) of as much as 22% in NGC 6334. The detected CP degree is the highest ever observed. In addition, the team has presented the first systematic survey of a combination of linear and circular polarimetry in nine star- and planet-forming regions.

Across Our Blogs: Mars Curiosity Rover Moonrise, New Rover, Billion Pixel Marsscape Seems the Mars Curiosity Rover has been a busy little six-wheeled fellow these past few weeks. Here's a roundup of news related to the rover, from top Technorati listed science blogs... From ArsTechnica - Curiosity rover shoots video of Martian moonrise - NASA released a time-lapse video of the Martian moon Phobos, as it ascends into view. From GizMag - Curiosity begins long trek to uncover Red Planet's secrets - the rover has begun a multi-month journey to Mount Sharp, where it will dig in to find signs of past life. During its travel time, it will likely celebrate it's first year anniversary of being on the red planet's surface. From The Huffington Post - Mars Water?

A Cosmic Map of the Exoplanets [Interactive] Exoplanet hunters have been busy. Since 2011 astronomers have discovered, on average, about three exoplanets every week—a precious few of which lie in the “habitable zone,” where water could take liquid form. This chart maps the known cosmic neighborhood of 861 planets. Click on the options under "Select layout" to map the planets based on their location in the sky, or on their distance from the Sun. (Since the Kepler planet-hunting satellite aims at a single spot in the Northern Hemisphere, a huge group of planets can be found near the 18-hour mark.) Here we've separated the planets into four categories.

collect space space history and space artifacts news Long before the first Instagram from space, the first check-in from orbit, or even the first astronaut's tweet, John Glenn sent an email to Bill Clinton. The reply it prompted was the very first email transmitted by a sitting U.S. president — it just happened to be to space. April 18, 2014SpaceX launches science-packed Dragon capsule on space station supply run A commercial cargo spacecraft loaded with more than two tons of scientific experiments and equipment lifted off for the International Space Station on April 18, after more than a month of delays.

The Milky Way Project We submitted the first Milky Way Project paper to the Monthly Notices of the Royal Astronomical Society (MNRAS) in December and the referee has been very kind to us so far. We have our fingers crossed for acceptance soon. Thanks to recent media coverage and some awesome buzz at the recent AAS meeting we decided to go ahead and post our paper to the arXiv yesterday. In addition to the paper, which explains how the catalogue was created from all your bubble drawings, we have also made the data available on the MWP site.

Enormous Galaxy Formed When Universe was 6% of Its Present Size Puzzles Astronomers Himiko, a "space blob" named after a legendary queen from ancient Japan, is an enormous galaxy, with a hot glowing gaseous halo extending over 55,000 light-years. Not only is Himiko very large, it is extraordinarily distant, seen at a time approximately 800 million years after the Big Bang, when the universe was only 6 percent of its present size and stars and galaxies were just beginning to form. The Hubble images, receiving optical and ultraviolet light, reveal three stellar clumps covering a space of 20,000 light-years.