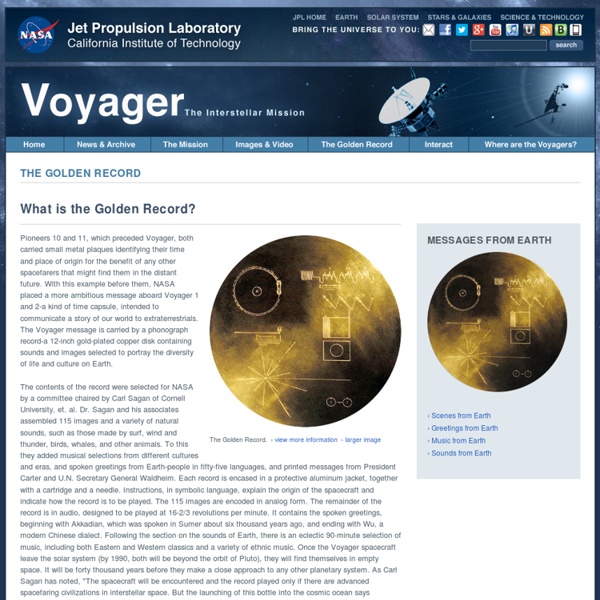 Pioneers 10 and 11, which preceded Voyager, both carried small metal plaques identifying their time and place of origin for the benefit of any other spacefarers that might find them in the distant future. With this example before them, NASA placed a more ambitious message aboard Voyager 1 and 2-a kind of time capsule, intended to communicate a story of our world to extraterrestrials. The Voyager message is carried by a phonograph record-a 12-inch gold-plated copper disk containing sounds and images selected to portray the diversity of life and culture on Earth. The contents of the record were selected for NASA by a committee chaired by Carl Sagan of Cornell University, et. al. The definitive work about the Voyager record is "Murmurs of Earth" by Executive Director, Carl Sagan, Technical Director, Frank Drake, Creative Director, Ann Druyan, Producer, Timothy Ferris, Designer, Jon Lomberg, and Greetings Organizer, Linda Salzman. Related:  Universe & Multiverse

Arecibo message This is the message with color added to highlight its separate parts. The actual binary transmission carried no color information. The Arecibo message was broadcast into space a single time via frequency modulated radio waves at a ceremony to mark the remodeling of the Arecibo radio telescope in Puerto Rico on 16 November 1974.[1] It was aimed at the globular star cluster M13 some 25,000 light years away because M13 was a large and close collection of stars that was available in the sky at the time and place of the ceremony.[2] The message consisted of 1,679 binary digits, approximately 210 bytes, transmitted at a frequency of 2,380 MHz and modulated by shifting the frequency by 10 Hz, with a power of 1,000 kW. The "ones" and "zeros" were transmitted by frequency shifting at the rate of 10 bits per second. The total broadcast was less than three minutes.[1][3] Dr. Explanation[edit] Numbers[edit] DNA elements[edit] The numbers 1, 6, 7, 8 and 15 appear. Nucleotides[edit] Double helix[edit]

Nothingness: Why nothing matters Our pursuit of naught provides profound insights into the nature of reality Read more: "The nature of nothingness" SHAKESPEARE had it right, even in ways he couldn't have imagined. For centuries, scientists have indeed been making much ado about nothing - and with good reason. The modern story of nothing began with a thought experiment dreamed up by Isaac Newton. With that answer, Newton made something out of nothing. The discovery of quantum mechanics took the story of nothing further still. This year's Nobel prize in physics recognises the power of nothing on cosmic scales. The Large Hadron Collider near Geneva, the world's most powerful particle accelerator, is also in the business of probing nothing. Since the time of Newton, we have thus gradually realised that nature has masked the identity of nothing with a Shakespearian deftness. Profile New Scientist Not just a website! More From New Scientist Stuff: A few of your favourite things (New Scientist) More from the web (YouTube)

The Worlds of David Darling How Quantum Suicide Works ­­A man sits down before a gun, which is pointed at his head. This is no ordinary gun; i­t's rigged to a machine that measures the spin of a quantum particle. Each time the trigger is pulled, the spin of the quantum particle -- or quark -- is measured. Depending on the measurement, the gun will either fire, or it won't. Nervously, the man takes a breath and pulls the trigger. Go back in time to the beginning of the experiment. But, wait. This thought experiment is called quantum suicide.

Hubble's Panoramic View Several million stars are vying for attention in this NASA/ESA Hubble Space Telescope image of a raucous stellar breeding ground in 30 Doradus, located in the heart of the Tarantula nebula. 30 Doradus is the brightest star-forming region in our galactic neighbourhood and home to the most massive stars ever seen. The nebula resides 170 000 light-years away in the Large Magellanic Cloud, a small, satellite galaxy of our Milky Way. No known star-forming region in our galaxy is as large or as prolific as 30 Doradus. The image comprises one of the largest mosaics ever assembled from Hubble photos and consists of observations taken by Hubble’s Wide Field Camera 3 and Advanced Camera for Surveys, combined with observations from the European Southern Observatory’s MPG/ESO 2.2-metre telescope that trace the location of glowing hydrogen and oxygen. The image is being released to celebrate Hubble’s 22nd anniversary. The colours come from the glowing hot gas that dominates regions of the image. Notes

Space.com Buy This Infographic as a Full-Size Poster Astronomers have discovered more than 700 alien planets beyond the solar system, and the count is rising all the time. Some are large and hot, and others are smaller and cooler, but scientists are still on the lookout for an Earth twin. They just got closer, with the announcement Dec. 5 of a planet found by NASA's Kepler space telescope to lie in the habitable zone around its star where liquid water, and perhaps life, could exist. You can purchase a 20"x60" poster of this SPACE.com infographic on high-quality 14G Photo Paper from the SPACE.com store here: Buy Poster Embed: Paste the code below into your site. <a href=" alt="Astronomers searching for another Earth are getting closer, thanks to recent discoveries by the Kepler space telescope. " src="

Your Sky by John Walker Welcome to Your Sky, the interactive planetarium of the Web. You can produce maps in the forms described below for any time and date, viewpoint, and observing location. If you enter the orbital elements of an asteroid or comet, Your Sky will compute its current position and plot it on the map. Each map is accompanied by an ephemeris for the Sun, Moon, planets, and any tracked asteroid or comet. A control panel permits customisation of which objects are plotted, limiting magnitudes, colour scheme, image size, and other parameters; each control is linked to its description in the help file. Your Sky provides three ways to view the sky with links, where appropriate, among the various presentations. Sky Map The sky map shows the entire sky as viewed from a given location at a specified time and date. Horizon Views Horizon Views, showing the stars above the horizon as seen from a specified observing site at a given date and time. The Virtual Telescope Your Sky help Related Software

SIMBAD Astronomical Database What is SIMBAD, and what is it not ? % The purpose of Simbad is to provide information on astronomical objects of interest which have been studied in scientific articles. Simbad is a dynamic database, updated every working day. It provides the bibliography, as well as available basic information such as the nature of the object, its coordinates, magnitudes, proper motions and parallax, velocity/redshift, size, spectral or morphological type, and the multitude of names (identifiers) given in the literature. Simbad is a meta-compilation built from what is published in the literature, and from our expertise on cross-identifications. Simbad is not a catalogue, and should not be used as a catalogue.

leaves something to be desired