The Worlds of David Darling 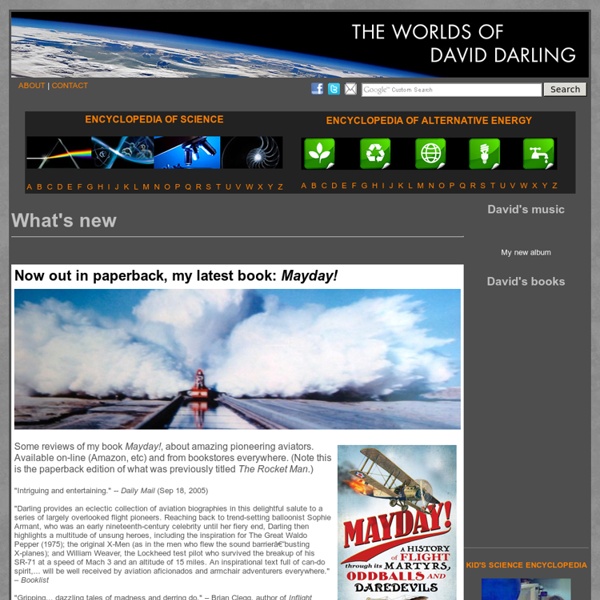 Rings around an asteroid (Mar 30, 2014) Observations at many sites in South America, including ESO's La Silla Observatory, have made the surprise discovery that the remote asteroid Chariklo is surrounded by two dense and narrow rings. This is the smallest object by far found to have rings and only the fifth body in the Solar System — after the much larger planets Jupiter, Saturn, Uranus, and Neptune — to have this feature. The origin of these rings remains a mystery, but they may be the result of a collision that created a disk of debris.

Space.com Buy This Infographic as a Full-Size Poster Astronomers have discovered more than 700 alien planets beyond the solar system, and the count is rising all the time. Some are large and hot, and others are smaller and cooler, but scientists are still on the lookout for an Earth twin. They just got closer, with the announcement Dec. 5 of a planet found by NASA's Kepler space telescope to lie in the habitable zone around its star where liquid water, and perhaps life, could exist. You can purchase a 20"x60" poster of this SPACE.com infographic on high-quality 14G Photo Paper from the SPACE.com store here: Buy Poster Embed: Paste the code below into your site.

10 Best Foods and Drinks for Exercising You know exercise is key if you want to stay fit. But did you know that what you eat and drink can help you reach your fitness goals faster? By feeding your body the right nutrients you can ensure it’s getting the raw materials it needs to help you power through your workout and build and repair muscle afterward. Jumpstart your exercise program with these 10 essential food and drinks. OatmealWhen it comes to priming your muscles for a workout, carbs are your best friend.

Sketchbook Secrets: 50 Beautiful Sketchbook Scans The sketchbook is—to borrow a term from the new millenniums’ popular discourse—an artist’s BFF. It’s a diary for the visually inclined—a place where artists can most comfortably explore their personal thoughts, work out their visual needs, practice, maintain a visual history, and hopefully create the unpolished work that will eventually lead to amazing work for the world to see. But, sometimes, when we’re lucky, we get to see the process. Below are 50 beautiful sketchbook scans from 35 talented artists. Allen Sutton Nevermind the Apocalypse: Earliest Mayan Calendar Found The oldest-known version of the ancient Maya calendar has been discovered adorning a lavishly painted wall in the ruins of a city deep in the Guatemalan rainforest. The hieroglyphs, painted in black and red, along with a colorful mural of a king and his mysterious attendants, seem to have been a sort of handy reference chart for court scribes in A.D. 800 — the astronomers and mathematicians of their day. Contrary to popular myth, this calendar isn't a countdown to the end of the world in December 2012, the study researchers said. "The Mayan calendar is going to keep going for billions, trillions, octillions of years into the future," said archaeologist David Stuart of the University of Texas, who worked to decipher the glyphs.

SIMBAD Astronomical Database What is SIMBAD, and what is it not ? % The purpose of Simbad is to provide information on astronomical objects of interest which have been studied in scientific articles. Simbad is a dynamic database, updated every working day. It provides the bibliography, as well as available basic information such as the nature of the object, its coordinates, magnitudes, proper motions and parallax, velocity/redshift, size, spectral or morphological type, and the multitude of names (identifiers) given in the literature. The CDS team also performs cross-identifications based on the compatibility of several parameters, in the limit of a reasonably good astrometry.

NASA and NSF-Funded Research Finds First Potentially Habitable Exoplanet NASA and NSF-Funded Research Finds First Potentially Habitable Exoplanet A team of planet hunters from the University of California (UC) Santa Cruz, and the Carnegie Institution of Washington has announced the discovery of a planet with three times the mass of Earth orbiting a nearby star at a distance that places it squarely in the middle of the star's "habitable zone." This discovery was the result of more than a decade of observations using the W. M. Keck Observatory in Hawaii, one of the world's largest optical telescopes. Welcome 2012! New Year's Around the World - Alan Taylor - In Focus As midnight marched across the world's time zones last night, people welcomed the start of a new year, ushering out the old and toasting the new. From Beijing to Moscow, Beirut to Paris, and London to New York, parties, fireworks and festivals welcomed 2012, the Year of the Dragon in the Chinese Lunar Calendar. Gathered here are images from these celebrations last night, and the many people who took part.

Powerless Illuminating Tubing Product Details The lighting pictured in the photo does not use any electricity; it is a glow-in-the-dark material that has been extruded into solid tubing in different diameters. This brings a new set of robust, shock-resistant alternatives to powered electroluminescence. The product is a flexible material that can be attached to any substrate. It has the advantage of being UV-resistant, and it can easily be cut to different lengths (requiring no sealing).

The Absurdity of Infinity: Astrophysicist Janna Levin Explains Whether the Universe Is Infinite or Finite in Letters to Her Mother – Brain Pickings By Maria Popova In 1998, while on the cusp of becoming one of the most significant theoretical cosmologists of our time, mathematician-turned-astrophysicist Janna Levin left her post at Berkeley and moved across the Atlantic for a prestigious position at Cambridge University. During the year and a half there, she had the time and space to contemplate the question that would eventually become the epicenter of her career — whether the universe is infinite or finite. Alien Worlds: Shedding light on our unearthly universe We've been enraptured by this most eye-catching of constellations since ancient times. It's a beautiful sight that dominates our winter skies in northern latitudes. The constellation was named after Orion the Hunter, a character in Greek mythology. But those ancient stargazers could never have dreamt of the tremendous details that modern astronomy has uncovered about this star system. Story continues below animation. Download this animation from iTunes U

Transparent TV: Sleek & Clean See-Through Screen Design Televisions have a strange mixed roll in the modern household. Some say they have replaced the traditional hearth, around which we used to gather for warmth. Others suggest that TV sets are distracting and detract from interaction. The latter group may just love this ‘invisible’ television design. Michael Friebe has gone beyond a mere concept, however, with a vision for how it would work – technology combining LCD and TOLED displays, rendering the view surface effectively clear when not in use and fully colored once activated. Molecular secrets of the "iron-plated snail" February 03, 2010 Molecular secrets of the “iron-plated snail” Life isn’t easy for the “scaly-foot gastropod”. Book Of Art January 18th, 2011 Books of Art by Isaac Salazar, a simple idea well executed. found at ffffound