The Fabric of the Cosmos 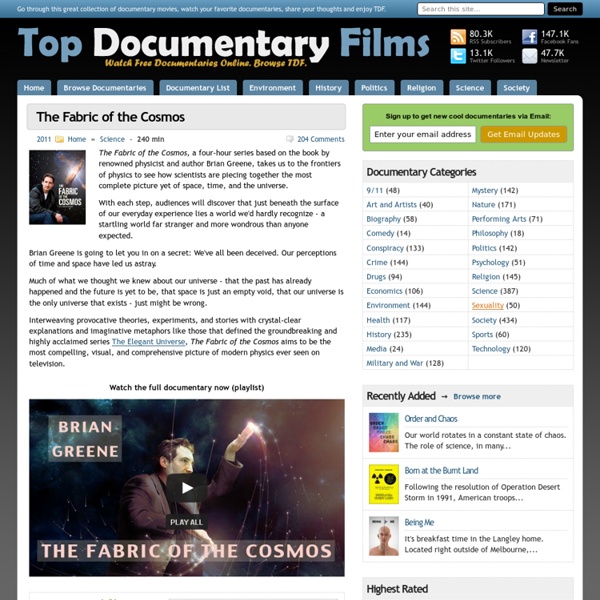 The Fabric of the Cosmos, a four-hour series based on the book by renowned physicist and author Brian Greene, takes us to the frontiers of physics to see how scientists are piecing together the most complete picture yet of space, time, and the universe. With each step, audiences will discover that just beneath the surface of our everyday experience lies a world we'd hardly recognize - a startling world far stranger and more wondrous than anyone expected. Brian Greene is going to let you in on a secret: We've all been deceived. Our perceptions of time and space have led us astray. Much of what we thought we knew about our universe - that the past has already happened and the future is yet to be, that space is just an empty void, that our universe is the only universe that exists - just might be wrong. Watch the full documentary now (playlist) Related:  Multiverse & Universe Origins

The multiverse in three parts: Brian Greene at TED2012 Photo: James Duncan Davidson Superstring theorist and physicist and the co-founder of the World Science Festival, Brian Greene splits his visually rich, action-packed talk into three distinct sections, all in the name of convincing us of the existence of the multiverse, the possibility that way beyond the earth, the milky way, we’ll find that our universe is part of a vast complex of universes we call the multiverse. Part One: The history and mystery In 1929, the astronomer Edwin Hubble discovered that distant galaxies were rushing away from us; that space was stretching and expanding. Fast forward to the 1990s, when two teams of Nobel Prize-winning astronomers aimed to measure the rate at which the expansion of the universe is slowing. Now here’s Greene’s mystery. Part Two: The solution to the mystery Now, Greene gives a quick recap of his own topic of research: string theory, an approach to reaching Einstein’s dream of a unified theory of physics. Of course, questions remain.

Welcome to the Multiverse Theoretical cosmologist isn’t one of the more hazardous occupations of the modern world. The big risks include jet lag, caffeine overdose, and possibly carpal tunnel syndrome. It wasn’t always so. On February 17, 1600, Giordano Bruno, a mathematician and Dominican friar, was stripped naked and driven through the streets of Rome. Then he was tied to a stake in the Campo de’ Fiori and burned to death. These days, cosmologists like me may be safer, but our ideas have grown only more radical. Also like Bruno, cosmologists are reaching far beyond what observational evidence can tell them. The extent of what astronomers can see is frustratingly limited by the speed of light: one light-year (about six trillion miles) per year. Obviously, we don’t know what the unobservable part of the universe looks like. Here we are not talking about disconnected universes, but rather what we cosmologists call pocket universes. That’s where the multiverse comes from. Next page: Universe gets diverse

MIT: "New Universes are Being Constantly Created" In this view, “nature gets a lot of tries — the universe is an experiment that’s repeated over and over again, each time with slightly different physical laws, or even vastly different physical laws,” says Jaffe. Some of these universes would collapse instants after forming; in others, the forces between particles would be so weak they could not give rise to atoms or molecules. However, if conditions were suitable, matter would coalesce into galaxies and planets, and if the right elements were present in those worlds, intelligent life could evolve. Some physicists have theorized that only universes in which the laws of physics are “just so” could support life, and that if things were even a little bit different from our world, intelligent life would be impossible. In that case, our physical laws might be explained “anthropically,” meaning that they are as they are because if they were otherwise, no one would be around to notice them. The Daily Galaxy via MIT News Office

Is an Adjacent Universe Causing the Dark Flow of Hundred of Millions of Stars at the Edge of the Observable Universe? Or, Might It Be Something Else Back in the Middle Ages, maps showed terrifying images of sea dragons at the boundaries of the known world. Today, scientists have observed strange new motion at the very limits of the known universe -- kind of where you'd expect to find new things, but they still didn't expect this. A huge swathe of galactic clusters seem to be heading to a cosmic hotspot and nobody knows why. The unexplained motion has hundreds of millions of stars dashing towards a certain part of the sky at over eight hundred kilometers per second. Not much speed in cosmic terms, but most preferred cosmological models have things moving in all directions equally at the extreme edges of the universe. "The clusters show a small but measurable velocity that is independent of the universe's expansion and does not change as distances increase," says lead researcher Alexander Kashlinsky at NASA's Goddard Space Flight Center. Hot X-ray-emitting gas in a galaxy cluster scatters photons from the cosmic microwave background.

Top 5 Reasons We Might Live in a Multiverse | Hidden Universes The universe we live in may not be the only one out there. In fact, our universe could be just one of an infinite number of universes making up a "multiverse." Though the concept may stretch credulity, there's good physics behind it. And there's not just one way to get to a multiverse — numerous physics theories independently point to such a conclusion. In fact, some experts think the existence of hidden universes is more likely than not. Here are the five most plausible scientific theories suggesting we live in a multiverse: 1. Scientists can't be sure what the shape of space-time is, but most likely, it's flat (as opposed to spherical or even donut-shape) and stretches out infinitely. So if you look far enough, you would encounter another version of you — in fact, infinite versions of you. 2. In addition to the multiple universes created by infinitely extending space-time, other universes could arise from a theory called "eternal inflation." 3. 4. 5.

Our Universe Might Just Be Fourth-Dimensional Black Hole Vomit Scientists are proposing a radical new way of think about how the universe began. In a new imagining of the Big Bang theory, they think it could have been the result of a four-dimensional star collapsing in on itself to form a black hole, which then proceeded to spew its guts out and, kindly, form our universe. The standard Big Bang theory has some limitations. The singularity — the idea that everything came from essentially nowhere — is one of them. The fact that the universe is at an almost uniform temperature is another, because that doesn’t square with the speed at which the universe has expanded. So physicists often ponder alternative theories that could explain the origin of our universe. And that’s just what Niayesh Afshordi, an astrophysicist with the Perimeter Institute for Theoretical Physics in Canada, has done. Our three-dimensional universe floats as a membrane in a “bulk universe” that has four dimensions. Picture: ESO/M.

Microwave radiation map hints at other universes - space - 17 December 2010 Update on 16 August 2011: The researchers ran additional statistical checks on the CMB data, looking at the probability that the bubbles would appear anywhere on the sky. Lead author Stephen Feeney says: "The current data favour no bubble collisions. However, a non-zero number of bubble collisions is still allowed, and there are four patches in the WMAP data where [signals of possible bubble universes] are higher than anything we expect from systematic errors due to instrumental effects, foreground-removal artefacts etc. Original story published 17 December 2010: Collisions between our cosmos and other universes may have left round "bruises" in a map of ancient cosmic radiation. Our universe is thought to have expanded rapidly in a process called inflation in the first moments after the big bang. Many of these universes should be carried away from one another as soon as they form. If our universe was hit by another bubble universe, the impact would release colossal bursts of energy.

How to map the multiverse - space - 04 May 2009 BRIAN GREENE spent a good part of the last decade extolling the virtues of string theory. He dreamed that one day it would provide physicists with a theory of everything that would describe our universe - ours and ours alone. His bestselling book The Elegant Universe eloquently captured the quest for this ultimate theory. "But the fly in the ointment was that string theory allowed for, in principle, many universes," says Greene, who is a theoretical physicist at Columbia University in New York. So far, it hasn't - though not for any lack of trying.