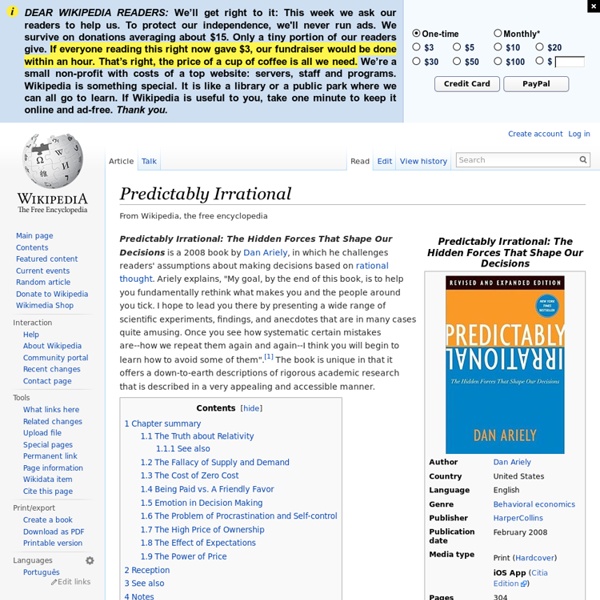 Predictably Irrational: The Hidden Forces That Shape Our Decisions is a 2008 book by Dan Ariely, in which he challenges readers' assumptions about making decisions based on rational thought. Ariely explains, "My goal, by the end of this book, is to help you fundamentally rethink what makes you and the people around you tick. I hope to lead you there by presenting a wide range of scientific experiments, findings, and anecdotes that are in many cases quite amusing. Once you see how systematic certain mistakes are--how we repeat them again and again--I think you will begin to learn how to avoid some of them".[1] The book is unique in that it offers a down-to-earth descriptions of rigorous academic research that is described in a very appealing and accessible manner. Chapter summary[edit] Ariely discusses many modes of thinking and situations that may skew the traditional rational choice theory. The Truth about Relativity[edit] See also[edit] The Fallacy of Supply and Demand[edit] Notes[edit] Related:  user experience

Economics: Which Way for Obama? by John Cassidy Nudge: Improving Decisions About Health, Wealth, and Happiness by Richard H. Thaler and Cass R. Yale University Press, 293 pp., $26.00 The bursting of the housing bubble and the associated credit crunch has so far wiped out about $3 trillion of wealth—nobody knows the exact amount—caused havoc in the financial markets, and prompted hundreds of thousands of homeowners to default on their monthly mortgage payments. John McCain, for all his protestations that economics is not his strong point, has put forward a coherent, if somewhat heartless, case for doing nothing, or very little, anyway. Hillary Clinton, after initially equivocating, has emerged as the would-be heir to FDR and John Maynard Keynes. Barack Obama has also criticized McCain for sitting back and watching while so many American families face eviction. If Obama isn’t an old-school Keynesian, what is he? Thaler’s columns, some of which he coauthored with Kahneman and Tversky, ran under the rubric “Anomalies.”

Instagram Finally Breaks Free Of Its Mobile-Only Confines Instagram is slowly shedding the "mobile-only" label it gained when it launched almost exactly two years ago. Users of the wildly popular, Facebook-owned photo app are getting Web-based profiles, it was announced on Monday. This sensible, overdue move for Instagram stands to benefits its users, but it doesn't quite go all the way. Instagram has been moving toward Web app territory for several months, but this is the service's biggest step in that direction. In July, the Instagram added the ability to like and comment on photos from the Web version that gets pushed out via Twitter and Facebook. That update also included the ability to follow users when logged into your existing Instagram account in a Web browser. How Instagram Users Will Benefit Starting this week, users will start getting Facebook Timeline-style profiles that display their entire photo stream in the browser. There's Still A Wall Between Mobile And Web

Screw the Power Users I designed HomeSite and TopStyle for power users. Only power users would want to edit HTML & CSS by hand, so I made sure to cater to them. Those products were filled with features and tool buttons, and their settings dialogs contained dozens of geeky options. Customers liked them that way. I liked them that way, too. But then I made FeedDemon. At first I built FeedDemon as though my customers were geeks like me, since that was what I was used to. So with each new version I tried to simplify the user interface, and dropped features & options that complicated the product. I’d come out with new versions that I thought dramatically improved the product, only to find my forums filled with complaints from power users who wanted the return of some obscure option, or were upset that I wasn't adding the geeky features they wanted. Sales went up, but positive feedback went down. Sure, if you're building a product for power users, make sure to cater to them.

geen goesting om te sorteren Self-Organization & Entropy - The Terrible Twins by Chris Lucas "Order is not pressure which is imposed on society from without, but an equilibrium which is set up from within."José Ortega y Gasset, Mirabeau and Politics, 1927 "Freedom and constraint are two aspects of the same necessity, which is to be what one is and no other." Introduction Many people will have heard of the Second Law of Thermodynamics. Probable States So, which states are probable exactly ? Order in Context But what exactly is this order ? Entropy and Gasses Does this mean that Entropy is a meaningless concept ? Beyond Ideal Gasses Does this then apply to solids also ? Traditional Entropy, by assuming that ideal gas properties always apply, ignores many of the other constraints (or boundary conditions) that apply to real systems. For liquids we have an intermediate case, the weaker attractions here allow for some motion, but the atoms when moving drag neighbouring atoms along - the liquid flows. Complexity of Information Self-Organization Is this phenomenon widespread ?

Gestures as a New Dimension in Mobile Design Something clicked in my head while writing my most recent article. While looking at the various paradigms that have grown from Twitter’s UI, I noticed an aspect of design that is oft overlooked. That aspect is gestures. Gestures are something we use on a daily basis, but despite this, few people look at them as an element of an applications UI. Since the creation of touch screens, gestures have reigned in an entirely new aspect as to how we interact with our devices. Gestures allow users to perform specific tasks in an extremely efficient and more dynamic manner. Three applications that I have used and stick out to me most are Clear, Pair, and Paper. Clear Clear is unique in the fact that essentially every piece of the app is based around gestures. From creating a new todo, to deleting one, all it takes is a swipe. Pair Pair doesn’t use gestures in the sense that Clear does. To Thumb Kiss, both you and your partner have to have the app open. Paper The opportunities

Ten Signs of a Culture's End We'd like to welcome you to the Clinton Library -- dedicated to preserving the true legacy of the 42nd President of the United States. Bill Clinton promised as President that his would be the "most ethical administration in the history of the country.” As you explore the pages of this website, you can decide for yourself whether he lived up to that promise Written by Brad Keena There are ten signs that depict the end of a culture. Great civilizations of the past were destroyed when people saw these signs but failed to act. The first sign of the end of a culture is that of a society which no longer worships or acknowledges God. A second indicator of the end of a culture is the decline of the family. A third important indicator of cultural demise is a society's low view of life. Another sign of the end of the civilization is the prevalence of base and immoral entertainment. Still another troublesome indicator of society's demise is the increase of violent crime among young people.

Self-organization Self-organization occurs in a variety of physical, chemical, biological, robotic, social and cognitive systems. Common examples include crystallization, the emergence of convection patterns in a liquid heated from below, chemical oscillators, swarming in groups of animals, and the way neural networks learn to recognize complex patterns. Overview[edit] The most robust and unambiguous examples[1] of self-organizing systems are from the physics of non-equilibrium processes. Self-organization is also relevant in chemistry, where it has often been taken as being synonymous with self-assembly. Self-organization usually relies on three basic ingredients:[3] Strong dynamical non-linearity, often though not necessarily involving positive and negative feedbackBalance of exploitation and explorationMultiple interactions Principles of self-organization[edit] History of the idea[edit] Sadi Carnot and Rudolf Clausius discovered the Second Law of Thermodynamics in the 19th century. Developing views[edit]

Startups, This Is How Design Works – by Wells Riley other Self-Organization Definitions aka Order, Autopoesis, Negentropy, ExtropyLovelock on Negentropy (Inverse Entropy, Negative Entropy) "The great physicist Ludwig Boltzmann expressed the meaning of the second law in an equation of great seemliness and simplicity: S=k(lnP), where S is that strange quantity entropy; k is a constant rightly called the Boltzmann constant; and lnP is the natural logarithm of the probability. It means what it says--the less probable something is, the lower its entropy. The most improbable thing of all, life, is therefore to be associated with the lowest entropy. Schrödinger was not happy to associate something as significant as life with a diminished quantity, entropy. "... "Excretion of entropy" is just a fancy way of expressing the dirty words excrement and pollution. "... A crucial insight that comes from Schrödinger's generalization about life is that living systems have boundaries. -- Lovelock, James: The Ages of Gaia (1988) Dissipative structures are doubly dissipative.