Watch as the world's cities appear one-by-one over 6,000 years 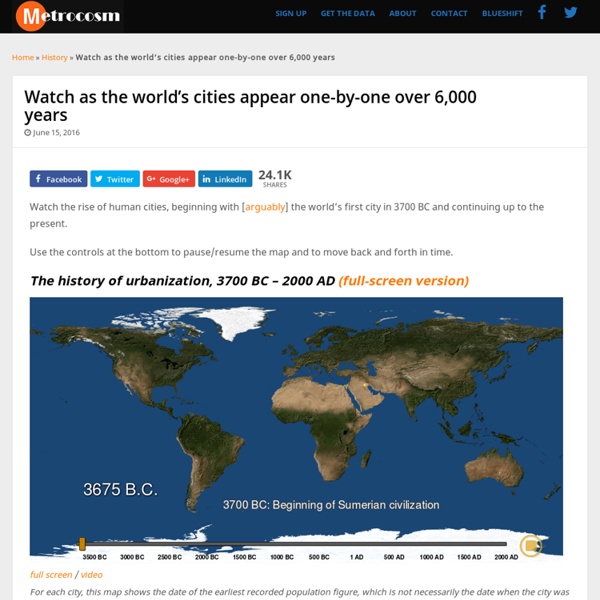 Watch the rise of human cities, beginning with [arguably] the world’s first city in 3700 BC and continuing up to the present. Use the controls at the bottom to pause/resume the map and to move back and forth in time. The history of urbanization, 3700 BC – 2000 AD (full-screen version) full screen / videoFor each city, this map shows the date of the earliest recorded population figure, which is not necessarily the date when the city was founded. The size of each dot corresponds to its population at that time. By 2030, 75 percent of the world’s population is expected to be living in cities. Urbanization didn’t begin in the 1960’s. The researchers compiled the data by digitizing, geocoding, and standardizing information from past research published about historical urban populations. As the authors of acknowledge, the data has a number of limitations and is “far from comprehensive.” Or if you just want to explore a bit, here is the same data from the map above, plotted using Mapbox. Credit

500 Year Old Map Was Discovered That Shatters The “Official” History Of The Planet The Facts:To bill to require the Secretary of Defense to establish an initiative on improving the capacity of military criminal investigative organizations to prevent child sexual exploitation does not have much of a chance to move on.Reflect On:How serious this problem is, especially in places of high power and 'elite' people. How does this behaviour by some of our 'leaders' reflect what their intentions for our world truly are? Why do we keep giving them power? Despite the fact that within the past couple of years alone millions of people around the world have become aware of the fact that the trafficking of both men, women, as well as children is a big problem. Just as we see with illegal arms sales, this type of activity seems to operate within the ‘black market’ and has sustained itself for years. The reason why it seems to continue to sustain itself year after year is simply the fact that many people in positions of power are involved.

Let This New York Times Best-Selling Author Help You With Your Magic System Nearly every fantasy novel has magic in it. The genre is practically defined by its use of magic, and if you’re sitting down to write a fantasy novel (and we know you are, what with our Inkshares contest running right now), you need to ask yourself how magic works in your world. Happily, New York Times bestselling author Brandon Sanderson has written extensively on this topic. Sanderson, author of the Mistborn novels series and the Stormlight Archive series, has created a series of laws for making great magic systems. Sanderson knows a thing or two about making magic systems. He fashioned a metal-based magic system called “allomancy” for Mistborn, which is as exciting as superpowers.

A Fascinating Map of Medieval Trade Routes Since their invention, automobiles have been a driving force of the global economy. Used by millions of people to get to work, transport goods, and travel, the modern automobile has become ubiquitous in our daily lives. So much so, that a whopping 92 million cars were produced in just 2019. To help us understand the might of the auto industry, this infographic from Parts Geek breaks down the earnings of 19 major car companies by an interesting metric—revenue per second. The Full List of Automakers Below are the earnings of the 19 automakers featured in the infographic.

FAQS About Worldbuilding How important is worldbuilding? How important is your story to you? People hear the word “worldbuilding” and automatically assume that the discussion is going to apply only to people who are writing science fiction and fantasy — after all, for everyone else, this is the world they’re going to be writing in, and it has already been built. That’s not the case. You’re worldbuilding when you sketch out a floorplan of the house that your character lives in so that you don’t accidentally have her bedroom on the first floor in chapter one and on the second in chapter three. You’re worldbuilding when you draw out a little map of the town in which your characters live and name the streets and decide that the corner drugstore is on the corner of Maple and Vine.

The History of Europe from 400 BC to the Present, Animated in 12 Minutes What does the future of Europe look like? Geopolitical times such as these do make one ponder such questions as, say, "In what shape (if any) will the European Union make it through this century?" But as any historian of Europe knows, that continent has seldom had an easy time of it: European history is a history of conquests, rebellions, alliances made and broken, and of course, wars aplenty — a major piece of the rationale behind the creation of organizations like the European Union in the first place. As a result, the division of Europe by the many groups and individuals who have laid claim to pieces of it has, over the past 2500 years, seldom held steady for long, as you can see on the animated map above. The Roman Empire did manage to paint the map red, literally, in the second and third centuries, but during all eras before and after it looks as multicolored as it was politically disunited.

Generating fantasy maps These are some notes on how I generate the maps for my Twitter bot @unchartedatlas, which is based on a generator I originally produced during NaNoGenMo 2015. There's JavaScript code for the generator on Github here, and the original messy Python generator code can be seen here. You may also be interested in this companion piece, which describes the placename generation. Inspiration

Oldest non-African modern human fossil revealed to be 195,000 years old The popular consensus in palaeoanthropology places the ancestors of our species exclusively in Africa before making a successful migration into Eurasia around 60,000 years ago. There has been some level of recognition that perhaps small numbers of early modern humans reached the Levant and the Middle East around 120,000 years ago. It was believed that these earlier populations represented a small-scale failed migration that barely managed to leave the continent before dying off.

Dialect — Thorny Games In 'Dialect', we follow the story of a community in isolation as seen through their language. We explore how the community's speech evolves as they face challenges, establish values, and contrast themselves from the society they've left behind. We'll embody characters within the Isolation, using this emergent language to express the interactions within the community.

MAP: Imperial Russia By the middle of the 19th century, the Russian Empire comprised more than 15 percent of the Earth’s land mass spanning parts of three continents, Europe, Asia, and North America. The population of the empire included not only Russians, but also Ukrainians, Belarusians, Finns, Poles, Armenians, Azerbaijanis, Tatars, Uzbeks, Kazakhs, Germans, and many other ethnic, linguistic, and religious groups. Russians were proud of the empire and used various means to celebrate its scale and diversity. Presented here are two sets of cards, circa 1800-33 and 1856, in which each card corresponds to a particular province or other administrative subdivision of the empire. Each card contains the map and coat of arms of the province and provides additional information about geographic features, cities, people, and local costumes.

Five Worldbuilding Mistakes Even Enthusiasts Make – Mythcreants The Expanse has a well-thought-out hard scifi setting that still ignores scientific reality. Most worldbuilding mistakes we see over and over again come from lazy storytellers who create worlds as an afterthought. But a few mistakes persist even in worlds built with considerable time and effort.

TIMELINE: World History First date on the Maya calendar Only four Mayan manuscripts still exist worldwide, of which the oldest and best preserved is the Dresden Codex, held in the collections of the Saxon State and University Library. The manuscript was purchased for the Dresden court library in 1739 in Vienna, as a “Mexican book.”