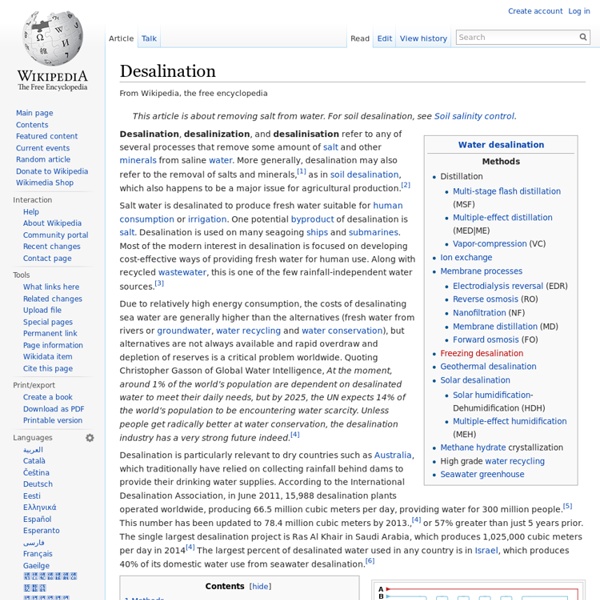 Desalination, desalinization, and desalinisation refer to any of several processes that remove some amount of salt and other minerals from saline water. More generally, desalination may also refer to the removal of salts and minerals,[1] as in soil desalination, which also happens to be a major issue for agricultural production.[2] Salt water is desalinated to produce fresh water suitable for human consumption or irrigation. One potential byproduct of desalination is salt. Desalination is used on many seagoing ships and submarines. Most of the modern interest in desalination is focused on developing cost-effective ways of providing fresh water for human use. Due to relatively high energy consumption, the costs of desalinating sea water are generally higher than the alternatives (fresh water from rivers or groundwater, water recycling and water conservation), but alternatives are not always available and rapid overdraw and depletion of reserves is a critical problem worldwide.

aquaphytex | Sustainable Water Treatment Namib Desert beetle The Namib Desert beetle (Stenocara gracilipes) is a species of beetle that is native to the Namib Desert of southern Africa. This is one of the most arid areas of the world, receiving only 1.4 centimetres (0.55 in) of rain per year. The beetle is able to survive by collecting water on its bumpy back surface from early morning fogs. To drink water, the S. gracilipes stands on a small ridge of sand using its long, spindly legs. Researchers at the Massachusetts Institute of Technology have emulated this capability by creating a textured surface that combines alternating hydrophobic and hydrophilic materials. References[edit] Further reading[edit]