Bizarre Chinese Temple Discovered Atop a 21-Storey Luxury Apartment Building in Shenzhen. A Chinese microblogger recently noticed a curious architectural object built upon the roof of a housing complex in Shenzhen. 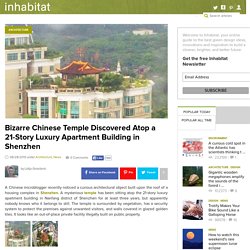 A mysterious temple has been sitting atop the 21-story luxury apartment building in Nanfang district of Shenzhen for at least three years, but apparently nobody knows who it belongs to still. The temple is surrounded by vegetation, has a security system to protect the premises against unwanted visitors, and walls covered in glazed golden tiles. It looks like an out-of-place private facility illegally built on public property. One of several illegally built rooftop structures in China, the temple could compromise the overall structural integrity of the building and put its tenants in danger. Beijing roof-top mountain mansion demolition begins. 'Professor' build mountain mansion on top of 26-storey buildingIllegal Beijing structure has been ordered to be destroyedNew footage show the lavish rock villa with pool and gardens By Daily Mail Reporter Published: 16:37 GMT, 15 August 2013 | Updated: 15:09 GMT, 16 August 2013 The elaborate rooftop mountain mansion in Beijing has been filmed from above, showing the big villa, the pool and impressive rock garden as it is announced it must be destroyed. 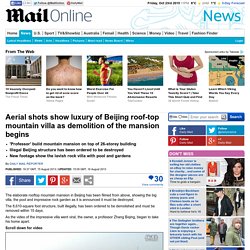 The 8,610-square foot structure, built illegally, has been ordered to be demolished and must be removed within 15 days. As the video of the impressive villa went viral, the owner, a professor Zhang Biqing, began to take his home apart. Scroll down for video Sky high: The shots, taken by a drone, are the first look at the gigantic Beijing rooftop villa from above The aerial video, posted on Chinese microblog Sina Weibo, was filmed with a home-made drone and an DSLR camera. Beijing 'mountain top' villa torn down Loaded: 0% Progress: 0% Urban Subversion: 13 Radical Examples of Guerrilla Housing. The A-Kamp47 project by Malka Architecture gives the homeless a safe place to sleep in the form of 23 parasitic tent pods stacked vertically against a public wall. 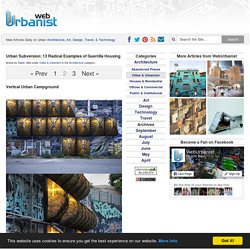 The project provided 47 people with shelter in Marseille, France, relying on a local law stating that no one can be evicted from housing during the winter. Foldable Pop-Up Homes Minimalist, foldable pop-up homes could offer basic temporary shelter in transitional places like vacant lots. The PopUp Home by Studio D3R in Germany even includes built-in furniture, and the origami shelter by Doowon Suh is made to be stacked and shipped for deployment after emergencies. Illegal Rooftop Structures in China If you’re rich enough to build your dream estate, but don’t want to leave the city, you can have your cake and eat it too – as long as you’re willing to carry out the whole process illegally on a skyscraper rooftop in China. Perfect Urban Penthouses: 7 Radical Rooftop Homes of NYC. Picture this: all of the vibrant activity that comes with living in the heart of New York City … but up away from the noise, with your own yard, porch and/or patio. 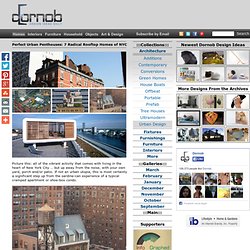 If not an urban utopia, this is most certainly a significant step up from the sardine-can experience of a typical cramped apartment or shoe-box condo. They are a strange and fascinating anomaly – whole houses ranging from traditional to modern, modest to luxurious, perched atop other (larger) multistory buildings right in the middle of Manhattan and Brooklyn. And who better than film-location scout Nick Carr (featured on The Huffington Post and Inhabitat, as well as his own site: ScoutingNYC) to find and capture these on camera, from ski-chalet-style retreats and ultramodern condo pods to big brutalist monstrosities. Some even have chimneys along the side, green gardens out front (or back) or share their rooftop space with other small stand-alone residences. Inspiring and Innovative Response to Urban Rooftop. Mandela Park, by Karres en Brands Landscape, Almere, The Netherlands. 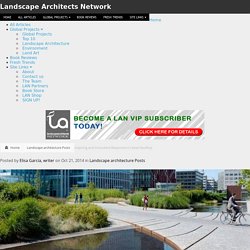 Almere in The Netherlands is the perfect example of a low-density city constructed from zero. Architects had a great opportunity here to demonstrate to the world how innovative and contemporary design works. Mandela Park, which opened in 2011, was designed by Karres en Brands Landscape and planned by OMA as part of the master plan for the next stage in the development of Almere. This plan focuses on the location of future business areas. Mandela Park Overview. Designing the Urban Rooftop As you can imagine, creating a new business center means ensuring easy availability and providing for new parking needs in the area.