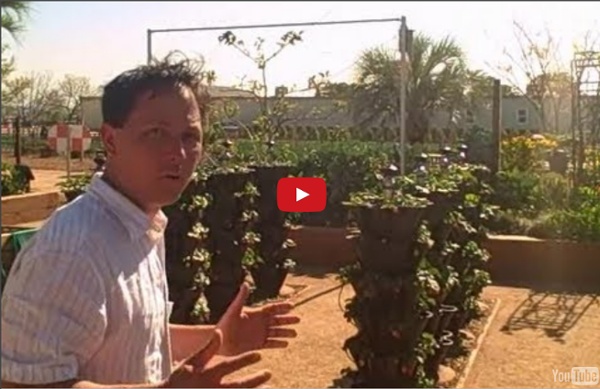 Beehive Tower is a Honeycomb Inspired Vertical Farm for London The aim of the Beehive Tower is to provide the Canary Wharf community of city dwellers a place to garden and live. The tower’s hexagonal mega structural lattice contains greenhouse spaces that also serve as a place for people to meet and socialize. Each hexagon is 8 stories high and contains 8 duplex apartments. A number of the hex cavities are dedicated to gardening and face in different directions so that each element gets a fair share of sun. Atop the tower, fourteen Quiet Revolution QR12 turbines collect enough wind to generate 420,000kWh a year.

Plantable: All-In-One Table & Trellis Hybrid Lets You Grow, Harvest and Eat Zahra Shahabi and Ollie Hammick/CC BY-NC-SA 2.0 Beyond the conventional planter on your balcony, there are many ways to grow food and herbs right in your own home, without the need to rely on a trip to the store. London-based designers Jamie Elliott and Liam Healy of JAILmake created this table that's a mix of eating surface and mini-garden, where the legs are re-fashioned as planters and trellises to support climbing plants. Jaime and Liam describe the motivation behind this simple but intriguing design they call "Plantable", which is handmade to order in their South East London workshop using English oak and metal: The Plantable reintroduces nature back into the experience of gathering, cooking and eating a meal.

Soda Bottle Carrots Seventeen days after I planted carrots in a sawed-off soda bottle, young carrot tops had sprouted on the windowsill in my basement. I encourage people who have little space that they can still grow small kitchen gardens. To that end, on May 1st I cut the top off of a two-liter soda bottle, filled the bottle with soil, and planted carrots in it. I described this project in a post titled Small Kitchen Garden Carrots in Containers.

Urban Agriculture: A Guide to Container Gardens A Guide to Container Gardens With inexpensive containers and suitable soil mix,you can create an urban garden virtually anywhere - on roof tops,vacant city lots, borwn fields, and unused portion of parking lots Job S. Ebenezer, Ph.D.President, Technology for the Poor, 877 PELHAM COURT, WESTERVILLE, OHIO - 43081technologyforthepoor@yahoo.com It is estimated that by 2030 AD nearly 50% of the world’s population may live in urban areas. As a consequence of this many millions of acres of productive farmland are expected to be lost to housing and other usage.

'Vertical farm' blossoms at meatpacking plant Greens and mushrooms grown at the Plant with homemade sauce and bread by Carla, the plant's mycologist. John Edel is building a zero waste veritcal farm on Chicago's South SideIt has bakers, fish farmer, tea brewer and other farms working with each other to use wasteEdel hopes this will show other businesses the ease of adapting to green initiatives (CNN) -- An old meatpacking plant on Chicago's South Side is being transformed into an eco farm, which its founders says will produce food sustainably, while creating zero waste. American entrepreneur John Edel is the founder of "The Plant," a vertical-farm initiative that he hopes will show people the ease of adapting to green food production in urban living environments. A vertical farm is an urban agriculture concept whereby food is grown in and on top of buildings in city areas.

One Glassy Garden: Growing Herbs in Mason Jars Forget the usual terracotta and (ugh!) plastic pots for container gardening. When you grow herbs in mason jars, you can have garden fresh ingredients on hand and also add some style to a sunny windowsill. Picture a row of mason jars filled with different herbs—basil, chives, parsley, cilantro, thyme, rosemary—dressing up your kitchen. Container Gardening Vegetable - Lettuce is the Perfect Container Gardening Vegetable I love growing lettuce. It's fast, easy and is the perfect container gardening vegetable. One advantage of growing lettuce in a container garden is that it easier to protect it from pests. I've had too many lettuce plants devoured before I get a chance to eat them. I put my lettuce container gardens up on tables or chairs to protect them from the legions of woodchucks, squirrels and bunnies that love to feast on my lettuce. You can grow lettuce in almost any container, as long as it has good drainage.

TreeHugger Images: Youtube screen grabs Food Doesn't Get More Local Than That A family living in Mesa, Arizona, has decided to convert an old unused backyard swimming pool into a very productive DIY urban greenhouse, which they named Garden Pool. Within a small, mostly enclosed space, they grow all kinds of vegetables and herbs, as well as raise chickens and tilapia fish. Plantagon Breaks Ground on its First 'Plantscraper' Vertical Farm in Sweden! Several years ago a Swedish-American company called Plantagon unveiled plans for a series of massive skyscraper greenhouses that stood to transform urban farming in large cities. While the spiraling vertical farms seemed too good to be true at the time, Plantagon broke ground on its very first vertical farm a few weeks ago in Linkoping, Sweden! The "Plantscraper" will grow and supply fresh vegetables while creating solutions to some of the most vexing city pollution issues. The design that was finally decided upon for the first Plantagon is no longer a sphere but an elegant tower - click through our gallery to see it. Plantagon seems to have traded in its initial geodesic dome design for a sheer tower that both contains and showcases the plants growing inside.

Vertical Gardening Tips - Organic Gardening A few years back I was leading an old friend through my garden, all the while bemoaning my lack of growing space, when he suddenly interrupted me and asked, "Why do people build skyscrapers?" What this had to do with my overcrowded garden, I hadn't a clue. "So they can cram a lot of people into a place without using up much ground room?" I ventured. Strawberry Pallet Planter Over the past year I've come across scores of diy pallet projects, some of them intriguing and others not quite there yet but still having potential. One that I see time and again is the idea of using a single wooden pallet as a strawberry planter. Filled with soil and with plants inserted in the gaps they're usually leaned up against a wall but sometimes bolted on to keep from tumbling over. It's a clever idea but I've steered away from trying it myself because I suspect that they'll require constant watering and erosion control and also because I'm not convinced that they'll work long term.