Congress for the New Urbanism 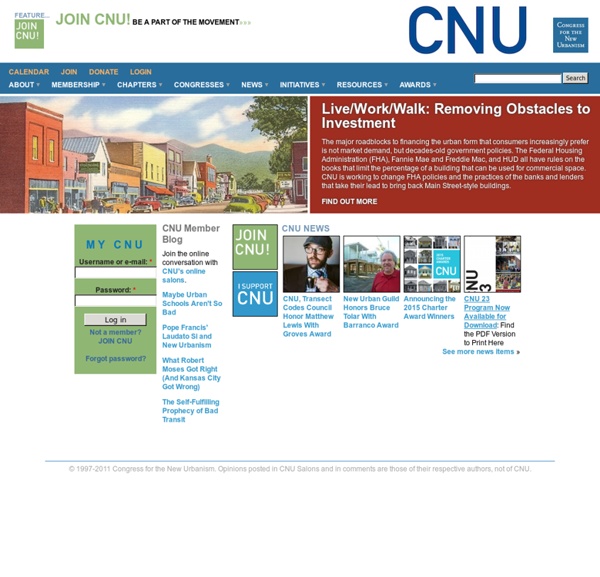 Milwaukee’s Park East Freeway In the 1960s, highway designers planned to surround the Milwaukee central business district with an expressway. Despite public protest, more than half of the highway loop was built, including a 0.8-mile stretch in 1969 that separated the north side from the rest of downtown, known as the Park East Freeway. Enough opposition emerged to stop the Park East from continuing east to the waterfront of Lake Michigan--but damage was already done. The Park East displaced multiple blocks of development, ultimately occupying 16 acres. In 1999, the Park East Freeway carried an estimated 54,000 vehicles on an average weekday. Freeway Removal In the 1990s, a new Riverwalk system stretching along the Milwaukee River through the entire downtown renewed interest in the riverfront and sparked a downtown housing boom. The Boulevard The freeway was replaced with McKinley Boulevard and the previous urban grid was restored. Economic Development Before and after plans for the Park East footprint.

Rethinking Urban Planning Education, by Alexa Mills Urban planning has long excelled at integrating different fields of study because cities, by nature, demand multidisciplinary thinking. Yet addressing the world’s most critical problems, such as urban poverty and energy efficiency, require a dynamism that moves beyond combining academic disciplines, and into a space that recognizes the knowledge generated by local people who live these issues first hand. With this in mind, I've outlined three potential avenues through which communities and universities might engage in more meaningful collaboration. 1. 2. 3. Communities at the margins, those who experience water shortages and transportation failures, develop solutions faster than the distant university is able. Alexa Mills works at the Community Innovators Lab (CoLab) at MIT. Credits: Photo of students participating in CoLab's Cartagena project, by Alexa Mills.

Progressive Urbanism? US in this case is a double entendre - referring both to the nation it is intended to rebuild and reimagine (through better urbanism, city building and a rethinking of the American Dream) and to the actors involved- the proverbial us. But one question that was rarely asked, at least not in any serious way, was who is this us? The irony of a group calling itself "CEO's for Cities" launching a "for us, by us" campaign in the name of everyday Americans seemed lost on everyone. If everyone wasn't so earnest and nice, I would have felt as if I was in a live-action parody of a David Harvey book. Yet the issue here is not simply whether this group - which is more university president and foundation head than corporate titan - should be spearheading a popular campaign to reinvent how we live. It is an issue which goes beyond urbanism to broader questions of development and democracy, and which is far more important than simply a question of labels or semantics.

A view obstructed: The urban plan as social contract The Museum of Fine Arts’ (MBAM) newest pavilion, which is to open next September, is topped with a glass-walled lookout over Mount Royal. But a proposed condo development, which is nearly double the building height limit for this area, would obscure a good chunk of the view. MBAM's model shows the 7-storey condo building (in red) obscuring the view from their newly-constructed lookout point. This is not a debate about density, aesthetics or heritage preservation; it is a breach of contract. In designing the new pavilion, the museum’s architects worked within city’s zoning regulations, which limited the volume of the new structure. But if the museum took it for granted that the same rules would apply to others, they were sorely mistaken. «Le Musée s’est astreint à concevoir son projet d’annexe en fonction du règlement de zonage. C’est Majeur The urban plan is a social contract among Montrealers, meant to be applied by those elected to govern, that shapes our shared living space.

The Word Is Dumb, Brantford, Very Dumb City council in Brantford, Ontario just voted 8-3 to demolish 42 heritage buildings, possibly the only pre-confederation cluster remaining in all of Ontario. Hard to believe they don’t see the tremendous potential there and would prefer to just get it out of sight and turn it into a lawn until someone comes up with an idea for the site. This situation is probably the dumbest anti-heritage concept in all of Canada. Photo Denzel Gordon A browse of the Brantford Wikipedia page and a few blogs reveals that Alexander Graham Bell had an office in one of those buildings, made the first distance call in Canada from Brantford (are these people crazy?). P.S. Like this: Like Loading...

» IPAM sets the stage for more inclusive long-term planning • Spacing Montreal Just when Montreal was in need of a superhero, the Institut de Politiques Alternatives de Montreal enters the scene with an all-star team to tackle urban issues. At the helm are three well-known names: Phyllis Lambert, Founding Director of the Canadian Centre for Architecture, Dinu Bumbaru, Policy Director of Héritage Montréal, and Dimitri Roussopoulos, founder of the Montréal Urban Ecology Centre. “Our assumption is that there’s a lot of value in Montrealness” said Dinu Bumbaru in a conversation earlier this week. “Montreal is a city which has an urban space which is still characterized by a fairly substantial mixity of use, of social demographics and so on.” While this city’s diversity this has often been credited for inspiring our vibrant arts scene, Bumbaru says it also plays out in the way we act upon our city. Evidently we’re not short of people with ideas and expertise to make Montreal a better place. “We want to reinforce citizen participation,” Lambert says.

About - Open Source Urbanism From Open Source Urbanism Cities are the physical manifestation of flows of people, material, money, and increasingly, information. The city is both a product and a generator of these flows. We believe designers need to identify the opportunities this emergent context offers, beyond the current dependence on handsets, interactive façades, and form-driven ‘expressions of the age’. This research project examines the changing role of public space in the context of increased information flows. Rory Hyde and Scott Mitchell.