Press club. Press club. How to get a city cycling. The vast majority of city street journeys take place in cars – despite all the many benefits of cycling. 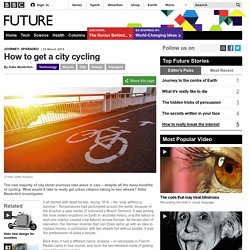 What would it take to really get urban citizens taking to two wheels? Katia Moskvitch investigates. It all started with dead horses, during 1816 – the “year without a summer”. Temperatures had plummeted around the world, because of the eruption a year earlier of Indonesia’s Mount Tambora. It was among the most violent eruptions on Earth in recorded history, and the fallout of dust and sulphur caused crop failures across Europe. Back then, it had a different name: draisine – or velocipede in French.

Today, it’s known as the most efficient method of self-powered transportation by far. Despite being clean and green, however, cycling is really popular in only a few countries. Fewer people on cycles, however, doesn’t mean fewer accidents – quite the opposite. Traffic traumas But can this Dutch or Danish bicycle utopia work everywhere? And can technology help us to make cycling smarter? City bicycles nyc. Denmark: Bicycle playgrounds rolled out nationwide. World's first solar cycle lane opening in the Netherlands. The bike path that connects the Amsterdam suburbs of Krommenie and Wormerveer is popular with both school children and commuters: around 2,000 cyclists ride its two lanes on an average day. 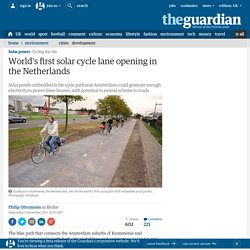 But next week Krommenie’s cycle path promises to become even more useful: on 12 November a 70-metre stretch will become the world’s first public road with embedded solar panels. Costing around €3m (£2.4m) and funded mostly by the local authority, the road is made up of rows of crystalline silicon solar cells, encased within concrete and covered with a translucent layer of tempered glass.

A non-adhesive finish and a slight tilt are meant to help the rain wash off dirt and thus keep the surface clean, guaranteeing maximum exposure to sunlight. Since the path cannot be adjusted to the position of the sun, the panels produce roughly 30% less energy than those fixed on to roofs. Two US engineers, Idaho couple Julie and Scott Brusaw, have been developing solar panelling units for road use since 2006.

Penhagen's piles of bicycles. 13 October 2014Last updated at 19:56 ET By Ellen Otzen BBC News, Copenhagen Copenhagen is one of the best places in the world to be a cyclist but there is a downside - thousands of parked bicycles. 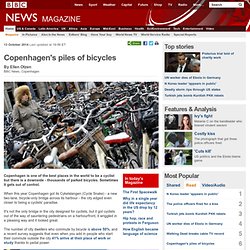 Sometimes it gets out of control. When this year Copenhagen got its Cykelslangen (Cycle Snake) - a new two-lane, bicycle-only bridge across its harbour - the city edged even closer to being a cyclists' paradise. It's not the only bridge in the city designed for cyclists, but it got cyclists out of the way of sauntering pedestrians on a harbourfront, it wriggled in a pleasing way and it looked great. The number of city dwellers who commute by bicycle is above 50%, and a recent survey suggests that even when you add in people who start their commute outside the city 41% arrive at their place of work or study thanks to pedal power. This has many obvious benefits, such as cleaner air and physical fitness. Cycle parking is a shambles here. Anton Pilmark: Banking on safety in numbers. Segregated cycle facilities. A bikepath in El Chicó in Bogotá, Colombia A bike lane on the side of a 30 km road in the Netherlands This diverter forces motor vehicles to turn, and allows though passage for bicyclists and pedestrians. 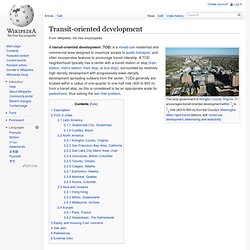 In a sense, nearly all communities built on reclaimed land in the Netherlands or as exurban developments in Denmark have had the local equivalent of TOD principles integrated in their planning, including the promotion of bicycles for local use. In the United States, a half-mile-radius circle has become the de facto standard for rail-transit catchment areas for TODs. A half mile (800 m) corresponds to the distance someone can walk in 10 minutes at 3 mph (4.8 km/h) and is a common estimate for the distance people will walk to get to a rail station. The half-mile ring is a little more than 500 acres (2.0 km2) in size.[1] TOD in cities[edit] Many cities throughout the world are developing TOD policy. Latin America[edit] Guatemala City, Guatemala[edit] Curitiba, Brazil[edit] North America[edit] Arlington County, Virginia[edit] Toronto, Ontario[edit]  Bicycle information for New South Wales.