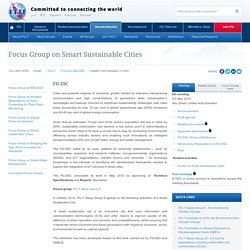 Urbanization’s advantages are however mirrored by significant sustainability challenges, with cities today accounting for over 70 per cent of global greenhouse gas (GHG) emissions and 60-80 per cent of global energy consumption. Given that an estimated 70 per cent of the world’s population will live in cities by 2050, sustainable urbanization has become a key policy point to administrations across the world. Here ICTs have a crucial role to play by increasing environmental efficiency across industry sectors and enabling such innovations as intelligent transport systems (ITS) and "smart" water, energy and waste management. The FG-SSC concluded its work in May 2015 by approving 21 Technical Specifications and Reports. See below. In October 2015, ITU-T Study Group 5 agreed on the following definition of a Smart Sustainable City:

PAS 180 – Smart Cities Terminology. Dubai Plan 2021 : Dubai Plan 2021. Dubai Plan 2021 describes the future of Dubai through holistic and complementary perspectives, starting with the people and the society who have always been, and always will be, the bedrock of the city. 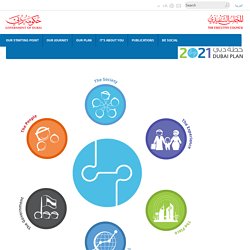 This aspect describes the characteristics that Dubai’s people need to have to deliver on the city’s aspirations in all areas, and examines the society needed to support and empower these individuals in achieving their goals. The plan addresses the urban environment including both natural and built assets, and looks at the living experience of the people of Dubai and its visitors as a result of their interaction with this environment and the economic and social services provided.

In addition, the plan also focuses on the economy, which is the city’s development engine and its fuel for its march forward. Finally, the plan addresses the government as the custodian of the city development in all aspects. “City of Happy, Creative & Empowered People” “An Inclusive & Cohesive Society” Dubai Plan 2021 : Dubai Plan 2021. CITIE supports city leaders to develop policy to catalyse innovation and entrepreneurship.

Bristol Is Open - Open Programmable City. EIP - Smart Cities and Communities Market Place. The Hackable City. The Hackable City is an on-going research project on the role of digital media in the process of citymaking that resulted from a cooperation between One Architecture and The Mobile City Foundation. 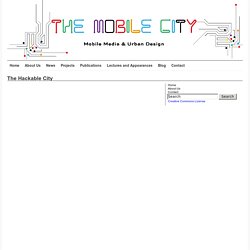 The project investigates the opportunities of digital media technologies for the empowerment of citizens and other stakeholders in a democratic process of citymaking. It also explores the shift in roles of and relationships between governments, (design) professionals and citizens in this process. In a hackable city, new media technologies are employed to open up urban institutions and infrastructures to systemic change in the public interest. It combines top-down smart-city technologies with bottom-up ‘smart citizen’ initiatives. In such a city, the urban (data) infrastructure functions as a platform that can be appropriated and incrementally improved upon by various stakeholders. Interns: Melvin Sidarta (Research) & Juliette Sung (Visual Communication) London Datastore – Greater London Authority. Welcome - CKAN.

PARK(ing) Day is the third Friday in September! ICRI Urban IoT. Sensing Cities. Home - Future Cities Catapult. Home - Future Cities Catapult. Social and Economic Policy Research. BetterCity.US. Congress for the New Urbanism. Triumph of the City: Amazon.co.uk: Edward Glaeser: 9780330458078: Books. Okay, you live in a rural area and are involved with agriculture, or work in the fishery industry, this book will not be of much use or interest to you in general, but if you live in a city, are interested in city planning, or how cities work, then this book will be of much interest. 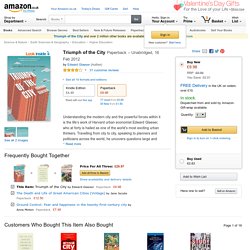 I must admit that I spent most of last night laying awake reading this as I became so absorbed. Edward Glaeser takes us on a trip through what makes a great booming city that brings in much needed capital to a country, and why they work, with examples of badly run cities that either struggle, or are in decline. Also he shows that those in decline can make dramatic comebacks. Some of the stuff in this book you will already know, some of it is just common sense, but some of it could end up blowing your mind. Some things may seem counter-intuitive, but when you look into them more deeply you see that they are correct.