The rise and fall of the world’s largest lake. When continental plates smashed together about 12 million years ago, they didn’t just raise new mountains in central Europe—they created the largest lake the world has ever known. 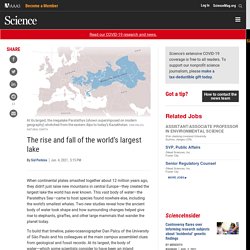 This vast body of water—the Paratethys Sea—came to host species found nowhere else, including the world’s smallest whales. Two new studies reveal how the ancient body of water took shape and how surrounding changes helped give rise to elephants, giraffes, and other large mammals that wander the planet today. Say Hello to the Scientist Caring for Smithsonian's 35 Million Entomology Specimens. Smithsonian Voices National Museum of Natural History April 13th, 2021, 6:00AM / BY Abigail Eisenstadt Spring’s arrival comes as a welcome reprieve for those craving sunshine and warmer days. 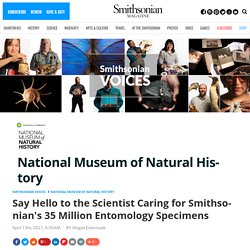 But it’s also a big deal for insects, who will surge in numbers as the temperature climbs. Some of those insects may recognize their relatives in the National Museum of Natural History, which houses over 35 million specimens in the National Entomological Collection. Welcome to World Anvil. Mars Portal — RedMapper. Medieval Demographics Done Better - Google Sheets. Old Disease Names By Sylvain Cazalet. Old Disease Names By Sylvain Cazalet This is a glossary of terms used to describe diseases in times gone by. 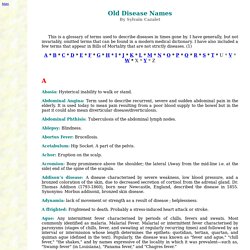 Abdominal Angina: Term used to describe recurrent, severe and sudden abdominal pain in the elderly. It is used today to mean pain resulting from a poor blood supply to the bowel but in the past it could also mean diverticular disease/diverticulosis. What if Earth were a super-Earth? For nearly four years, NASA's Kepler spacecraft whisked through space, surveying our corner of the galaxy. 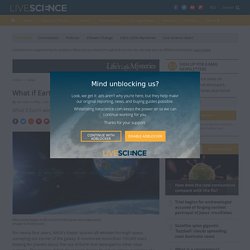 It monitored more than 150,000 stars, looking for planets about the size of Earth that belonged to other solar systems. The mission didn't disappoint; Kepler found countless examples of a type of planet known as a super-Earth. These faraway planets might remind you of home — they're rocky, smaller than gas giants, located near their star and sport a relatively thin atmosphere. But they're way larger than the blue marble: These super-Earths are a honking two to 10 times bigger than our Earth. Because there are so many super-Earths out there, it begs the question: What would happen to our planet if it were two or even 10 times the size it is now? Related: What if the Earth was flat? No matter the reason for Earth's current size, there's no way to truly know what would happen to Earth if it were super. Originally published on Live Science. Related: What if the Earth was flat? Welcome to Mystery Flesh Pit National Park, One Redditor’s Colossal Feat of Worldbuilding.

If you took the most Cronenbergian episodes of The Magic School Bus, blended them in a cosmic meat smoothie with the avanc from China Miéville’s The Scar, and then sprinkled in some good ol’ American tourist trap schlock, you still might not approach the eldritch delights of Mystery Flesh Pit National Park, located just south of Odessa, Texas, off Highway 20. 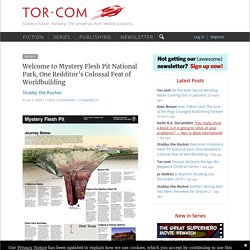 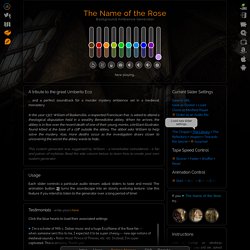 Italian music and a huge Eco/Name of the Rose fan -- when someone sent this to me, I expected it to be super cheesy -- new age notions of medieval sounds + Robin Hood: Prince of Thieves, etc. etc. Instead, I'm super captivated. This is amazing. Thank you! Ancient Earth globe. Ultimate Fantasy Writer's Guide.

Collaborative World Building: Dawn of Worlds. My new campaign is starting this weekend, and my group opted to make use of Dawn of Worlds to design the game world. 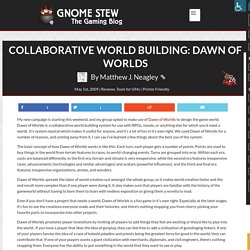 Dawn of Worlds is a collaborative world building system for use with RPGs, novels, or anything else for which you’d need a world. These 4 Ancient Apocalypses Changed the Course of Civilization - The Crux. Life, as they say, goes on. 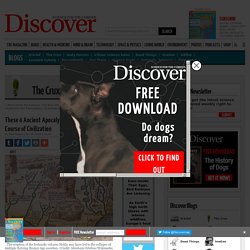 Until one day it doesn’t. For ancient societies, without the means to predict natural disasters, destruction could often come suddenly and completely by surprise. Below are four of the most devastating natural events in recorded human history, and the societies that they wiped off the map. PlanetMaker. World Anvil Worldbuilding tools & RPG Campaign Manager. Foodbuilding as Worldbuilding — Creating Fantasy Cuisines. Artifexian. World Anvil World Building, Tools, RPG Campaign Manager and Community. Flood Map: Water Level Elevation Map. Please support this site by sharing it with your friends and followers Disclaimer: Please note that just this elevation flood map is not sufficient enough in full extent for the analysis since there are many other factors like surface runoff, flow diversion, land type etc. are also responsible for the flood coverage along with elevation. 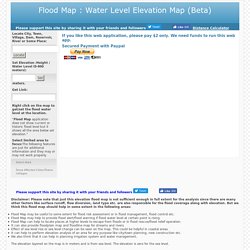 But we think this flood map should help in some extent in the following areas: Flood Map may be useful to some extent for flood risk assessment or in flood management, flood control etc. Flood Map may help to provide flood alert/flood warning if flood water level at certain point is rising. Flood Map can help to locate places at higher levels to escape from floods or in flood rescue/flood relief operation. 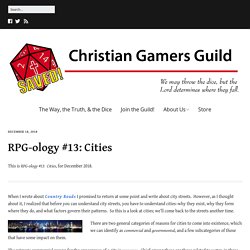 When I wrote about Country Roads I promised to return at some point and write about city streets. However, as I thought about it, I realized that before you can understand city streets, you have to understand cities–why they exist, why they form where they do, and what factors govern their patterns. So this is a look at cities; we’ll come back to the streets another time. There are two general categories of reasons for cities to come into existence, which we can identify as commercial and governmental, and a few subcategories of those that have some impact on them. The primary commercial reason for the appearance of a city is resources.

Cities grow at natural harbors, because of shipping. The Savant's Rants: Europe's Navigable Waterways. So I came across this resource that I think is helpful for using rivers as a central element in RPGs - it's the UNECE interactive map of Europe's Navigable Waterways (click here for the PDF download but note it's at least a 2MB file when compressed to JPEG). It's very, very detailed, and although the legend/key (in English, French, and Russian) doesn't appear in the above image, it's readily accessible in the bottom right of the PDF version. Looked at from an overall perspective, the map shows the waterways by several characteristics: Type (free-flowing river, canalised river, canal)Class (regional vs international significance) In addition, major local features are detailed such as: Locks & Weirs (common)Ship lifts (rare)Dams (those without locks)Bridge maximum heights and minimum draughtLocal restrictions (shallows)

What Was The Worst Time To Be Alive In Human History? We currently live in the safest time in human history. Sure, “strongman politics” has made a comeback, many of the planet’s biggest problems remain unsolved, and there was that god-awful year when half of the world’s most beloved celebrities dropped dead. Nevertheless, relatively speaking, the 2010s are a great time to be alive. So, when was the crappiest time to be alive? This question was inadvertently raised by a recent historical study attempting to figure out how the European monetary system changed after the fall of the Western Roman Empire. Writing in the journal Antiquity, the researchers were looking for evidence of pollution from silver processing in the ice cores buried deep in the European Alps. London Medieval Murder Map — Violence Research Centre.

Fantasy Maps & Plate Tectonics. Have you been to ‘Queen Maeve’s Vulva’? Ireland’s oddest placenames. A koan is a paradoxical riddle without a solution. It’s also an apt definition of many of Ireland’s placenames. These encoded glimpses into our culture, psyche and past practices offer insights into the lives of our ancestors, knowledge of lost environments and a profound sense of just how long we have been beetling away on this island.

Nate Mangion is creating the World of Elyden. Introduction Hi, my name is Nate Mangion (more commonly known as Vorropohaiah on the internet) and I'm a worldbuilder by nature. Been doing it for most of my life. I am interested in all aspects of worldbuilding (autocorrect hates that word, but I’m sticking with it). Mythologies, cosmogonies, histories, culture, cartography (one of my favourite subjects), taxonomy, linguistics (one of my least favourite subjects)… all these and so many more fields and sciences all play a role in the creation of a world. 10+ Questions To Ask When You’re Trying To Build A World – Crafty House. Quora. Tolkien’s Map and the Perplexing River Systems of Middle-earth.

Tolkien’s Map and The Messed Up Mountains of Middle-earth. We’ve got to talk about Tolkien’s map of Middle-earth. The man might have made up some beautiful languages and written stories that generations of writers have responded to in ways ranging from homage to bad photocopy, but I’m going to guess he was no connoisseur of geography. Even at an early age, I thought the map of Middle-earth looked a little… odd. Medieval Fantasy City Generator by watabou. This application generates a random medieval city layout of a requested size. The generation method is rather arbitrary, the goal is to produce a nice looking map, not an accurate model of a city. Vulgar generates fantasy languages with a click / Boing Boing. Five Worldbuilding Mistakes Even Enthusiasts Make – Mythcreants.

Imgur user shows map of every river basin in the US. Writing and RPG-Related Generators. Watch as the world's cities appear one-by-one over 6,000 years. Watch the rise of human cities, beginning with [arguably] the world’s first city in 3700 BC and continuing up to the present. Use the controls at the bottom to pause/resume the map and to move back and forth in time.

The history of urbanization, 3700 BC – 2000 AD (full-screen version) full screen / videoFor each city, this map shows the date of the earliest recorded population figure, which is not necessarily the date when the city was founded. Let This New York Times Best-Selling Author Help You With Your Magic System. Nearly every fantasy novel has magic in it.

Fantasy Worldbuilding Questions. FAQS About Worldbuilding. Generating fantasy maps. These are some notes on how I generate the maps for my Twitter bot @unchartedatlas, which is based on a generator I originally produced during NaNoGenMo 2015. Updated Worldbuilding Round-Up – MARSHALL RYAN MARESCA. Updated Worldbuilding Round-Up – MARSHALL RYAN MARESCA. Great map of the United States overlaid on Europe at the correct Latitude (via Randy Olson) World Builders I: Rubric for Climate Page in PowerPoint E Viau CSULA. ProFantasy Community Forum - FT3 Grid - Tropic of Cancer / Capricorn How? H.I. #56: Guns, Germs, and Steel. Zebra vs Horses (Americapox Part 2) Dialect — Thorny Games. In 'Dialect', we follow the story of a community in isolation as seen through their language.

We explore how the community's speech evolves as they face challenges, establish values, and contrast themselves from the society they've left behind. We'll embody characters within the Isolation, using this emergent language to express the interactions within the community. Worldbuilding. Hodges. List of Prices of Items in Medieval England. What Did Medieval Items Really Cost? And How Much Did An Archer Make?