The official travel guide to your holiday in Sweden 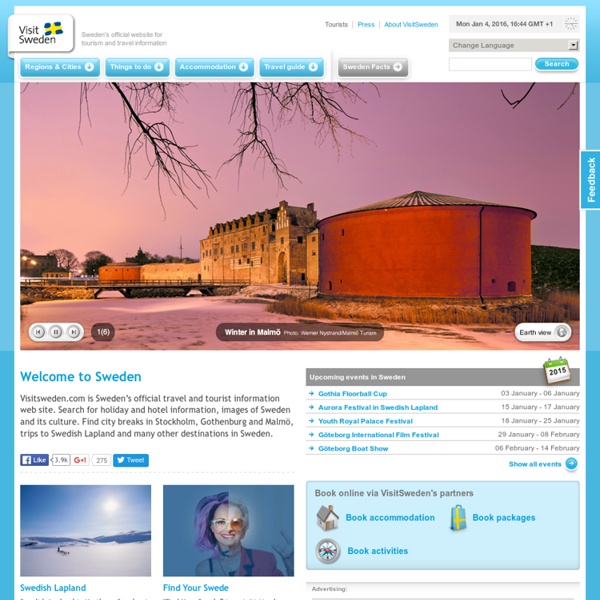 Sustainable Malmö | Press Malmö has changed from a grey industrial city with deserted streets and squares to an exciting city of the future, where anything can happen – and does. Let sustainability guide Catarina Rolfsdotter-Jansson take you on a tour of one of the world’s greenest cities, a city with several prestigious prizes for its work on sustainable development: Let’s start with a little history. In the late 1980s, Malmö was a typical industrial city. But when Kockums shipyard closed and thousands of workers were laid off in 1986, the people running the city realised that an era had ended and it was time for a new one. Now Malmö is internationally acclaimed for its work on sustainable development. We can start our tour at Western Harbour, as the area is symbolic of what has happened in Malmö. When you cycle alongside the waterfront and approach Western Harbour, a magnificent urban silhouette, with a tall architectural profile, meets the sea and eye. Photo: Oskar Falck The opening of Malmö University in 1998

이탈리아 Stockholm and Malmö at the forefront of sustainable urban development according to a new UN study - Stockholm University Thomas Elmqvist at Stockholm Resilience Centre, Scientific Editor of the report. The assessment, entitled Cities and Biodiversity Outlook and edited by Professor Thomas Elmqvist at Stockholm Resilience Centre at Stockholm University, draws on contributions from more than 120 scientists worldwide. It highlights a wide range of successful examples of sustainable urban development, initiated by cities, local governments and sub-national governments in both developed and developing countries. “Cities need to learn how to better protect and enhance biodiversity, because rich biodiversity can exist in cities and is extremely critical to people’s health and well-being," says Professor Thomas Elmqvist, who will present the report on 15 October at the UN Convention on Biological Diversity in Hyderabad, India. Opportunity to improve quality of life in future cities Over 60 percent of the land projected to become urban by 2030 has yet to be built, the report states. Unique source of inspiration

포르투갈 From wasteland to recycling waste: Malmo's eco district A defunct shipyard in the city of Malmo, Sweden, has been transformed into a green, sustainable districtThe Bo01 project created a residence where 100 percent of energy comes from renewable sourcesFood waste is converted into biogas for use in local busesThe project didn't meet all goals but has set an example now used in eco-projects in other parts of the world Editor's note: Future Cities offers an inside look at the rapid evolution of urban spaces, exploring new ideas, new technologies and new design concepts that might impact urban life throughout the world. (CNN) -- Sun, wind and water now rule an area that was once polluted and derelict. In the Swedish city of Malmo, an old shipyard has been converted from industrial wasteland to spotless eco-district, setting a world class example for sustainable living. The area started becoming commercially defunct in the late 80s. The Western Harbour plans to be carbon neutral by 2030 and run purely on renewable energy.

폴란드 Malmö – the sustainability project in the city of the future - Crossing Borders On April 1st 2014, a small group of international students set themselves on the path of discovering the true meaning of urban sustainable development and lifestyle. This was a true quest requiring courage and comprehension skills, which the students have been acquiring for months before the enlightenment journey. After months of searching, they came across the infamous city of Malmö – the third largest city in Sweden. Malmö, as students were told by their ancient environmental guide, was once a “glorified Viking city” with one of the most magnificent shipyards in the world and numerous industrial sites. “So, what is Western Harbour?” By the end of the day all of the students got exhausted. What can YOU do in order to change the future and create a sustainable world? Umedahon Buzurukova During my previous semester at Krogerup Hojskole, I've had the opportunity to see and experience the inspiration that the Crossing Borders offers to the youth. Latest posts by Umedahon Buzurukova (see all)

Developing smart cities: In the Spanish city of Santander, the walls will have ears Urban noise can be quite a nuisance, but it can also provide a lot of valuable information about the city’s needs. A first of its kind project in the city of Santander will check if this data can actually be used to improve the lives of citizens and develop a better, smarter city. “The EAR-IT project is an EU FP7 co-funded project working over a two-years period (Oct’2012-Sep’2014) on the exiting challenges of using acoustic sensing in smart cities and smart building. With innovation and research in this area, the project will experiment in the city of Santander (Spain) and for intelligent building in Geneva, applications improving security, energy saving, traffic management and more. The project idea will conduct a large-scale ‘real-life’ experimentation of intelligent acoustics for supporting high social value applications fostering innovation and sustainability”, the project’s website reads. Basically, they want to record sounds and see how this data can benefit residents.