AeroFarms - An environmental champion, AeroFarms is leading the way to address our global food crisis by growing flavorful, healthy leafy greens in a sustainable and socially responsible way. 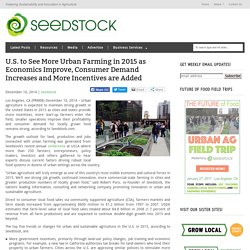 The growth outlook for land, production and jobs connected with urban farming was generated from Seedstock’s recent annual conference at UCLA where more than 250 farmers, entrepreneurs, policy makers, investors and others gathered to hear experts discuss current factors driving robust local food systems in dozens of urban settings across the country. “Urban agriculture will truly emerge as one of this country’s most visible economic and cultural forces in 2015. Hedin D 151001. Urban Agriculture. 2 Sustainable Urban Agriculture NYSERDA. Sound Economics. Farming in cities? 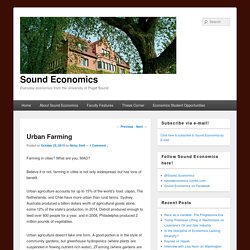 What are you, MAD? Believe it or not, farming in cities is not only widespread, but has tons of benefit. Urban agriculture accounts for up to 15% of the world’s food. Japan, The Netherlands, and Chile have more urban than rural farms. Sydney, Australia produced a billion dollars worth of agricultural goods alone, some 12% of the state’s production. Urban agriculture doesn’t take one form. Rooftop garden, a form of ZFarming No matter which method they take, urban agriculture has a multitude of benefits over importing food. More environmental benefits include decreasing habitat loss from farm expansion and aquaponics (where fish are grown with plants in an enclosed and fully-functioning micro-environment) reduces stress on water ecosystems.

A commercial aquaponic system There are also numerous social benefits, especially from the not-for-profit oriented urban agriculture projects, such as community gardens and street-side horticulture. UALitReview 2013. Chapter 10 Policy Brief new. Urban farming is booming, but what does it really yield? April 27, 2015 — Editor’s note: This story was produced in collaboration with the Food & Environment Reporting Network, a non-profit investigative news organization. 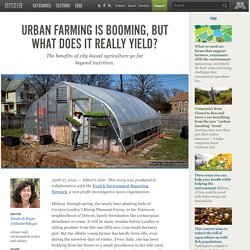 Midway through spring, the nearly bare planting beds of Carolyn Leadley’s Rising Pheasant Farms, in the Poletown neighborhood of Detroit, barely foreshadow the cornucopian abundance to come. It will be many months before Leadley is selling produce from this one-fifth-acre (one-tenth-hectare) plot. But the affable young farmer has hardly been idle, even during the snowiest days of winter. Twice daily, she has been trekking from her house to a small greenhouse in her side yard, where she waves her watering wand over roughly 100 trays of sprouts, shoots and microgreens.

She sells this miniature bounty, year round, at the city’s eastern market and to restaurateurs delighted to place some hyperlocal greens on their guests’ plates. Urban Advantages Funders don’t necessarily expect community gardens to become self-sustaining. Is urban farming only for rich hipsters? Spending on ethical food and drink products – including organic, Fairtrade, free range and freedom foods – hit £8.4bn in the UK in 2013, making up 8.5% of all household food sales. 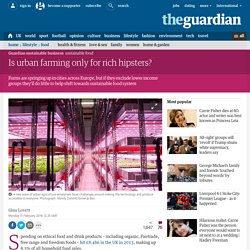 By leveraging environmental credentials, such as local, sustainable and transparent production, a new wave of urban agriculture enterprises are justifying a premium price. But while a higher price point might better reflect the true cost of food production and help build a viable business, it can also exclude lower income groups, fuelling perception that local, sustainably produced food is the preserve of food elitists. Making urban grown produce affordable “This is a real challenge,” says Kate Hofman, CEO and co-founder of London-based aquaponics enterprise GrowUp Urban Farms, which produces fish, salads and herbs in unused city spaces to sell wholesale.

Unit 84 – its aquaponic, vertical farm – is housed in an industrial warehouse in east London. “Food is a commodity, and we have to make the business work. UALitReview 2013. Urbanfarmers.