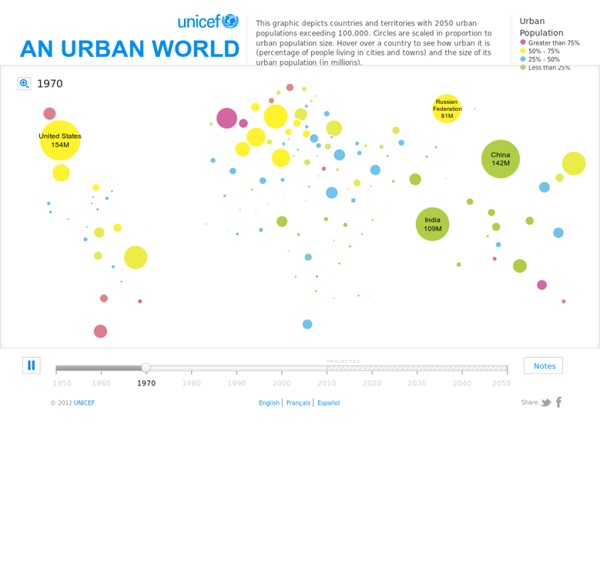 Close Source United Nations, Department of Economic and Social Affairs (UNDESA), Population Division special updated estimates of urban population as of October 2011, consistent with World Population Prospects: The 2010 revision and World Urbanization Prospects: The 2009 revision. This map is stylized and based on an approximate scale. Notes Because of the cession in July 2011 of the Republic of South Sudan by the Republic of the Sudan, and its subsequent admission to the United Nations on 14 July 2011, data for the Sudan and South Sudan as separate States are not yet available. Data for China do not include Hong Kong and Macao, Special Administrative Regions of China. Data for France do not include French Guiana, Guadeloupe, Martinique, Mayotte and Reunion. Data for the Netherlands do not include the Netherlands Antilles. Data for the United States of America do not include Puerto Rico and United States Virgin Islands. This visualization was created by Periscopic - do good with data.

The Urban Flâneur Guidebook: The technique of being a Suburban Flâneur (revised 15 September 2012) (This image was found within an interesting piece, "Unit 1: A Crisis of Place and the Alternative of the New Urbanism" , on New Urbanism Online.) One of the defining aspects of an urban flâneur is the activity of strolling down streets, stopping in cafes, observing people and thoughtfully contemplating the totality of the present urban environment that sh(e is immersed. This is usually accompanied by note writing and perhaps photographs. To an urban flâneur, the urban environment is multi-layered and not just a collection of houses, shops, streets, or factories, but a dynamic entity in which people conduct their lives and experience the world outside of them. In our present age, suburbs are now a significant part of all major cities in the world, developed and developing. As previously mentioned, one of the major distinctions of being an urban flâneur is the aspect of strolling or walking aimlessly.

Urban World: A new app for exploring an unprecedented wave of urbanization The McKinsey Global Institute’s updated Urban World app offers a look at how demographic shifts will affect the growth of cities through 2025. For more than a decade, the McKinsey Global Institute (MGI) has been studying the unprecedented global wave of urbanization. As the business and economics research arm of McKinsey, we provide leaders in the commercial, public, and social sectors with the facts and insights on which to base management and policy decisions. For years, demographic trends worked in favor of urban growth—huge cohorts of working-age people fueled cities’ economies. But now there is a radical break in that trend. Two major shifts are happening at the same time: population growth is slowing worldwide, and rural-to-urban migration is waning as a force for urban expansion, particularly in developed economies. App screenshot Even within countries, there are large variations in cities’ demographic profiles. Install the Urban World App for iPhone, iPad, or Android.

Garden Bridge: Tough questions for £175m Thames project Image copyright Heatherwick Studio The proposed Garden Bridge across the River Thames has run into trouble after changes in the government and the end of Boris Johnson's run as London mayor. New Transport Secretary Chris Grayling is due to decide whether to extend a £15m government underwriting of the £175m project until September 2017. But tough questions are being asked in Whitehall about the footbridge and its public value, Newsnight understands. The Garden Bridge Trust said it hoped ministers would continue to support it. The 366m (1,200ft) tree-covered Garden Bridge, whose construction is yet to begin, would span the Thames between Temple and the South Bank. Mr Grayling is understood to be keen to study all the options ahead of his decision, which needs to be made imminently to allow the trust - the charity responsible for building the bridge - to file its accounts this week. 'Shut bridges not brilliant' Image copyright Arup 'Lone voice'

1. The Latin American mega-city: An introduction Contents - Previous - Next This is the old United Nations University website. Visit the new site at 1. What is a mega-city? Alan Gilbert By the year 2000, the world will contain 28 mega-cities with more than eight million people each (UNDIESA and UNU, 1991: 6). The sheer number of people living in Latin America's mega-cities is not the only reason for looking at them carefully. Table 1.1 Latin America's giant cities, 1995 Source: United Nations, Department of International Economic and Social Affairs, 1995:132 9. The Lima of today, with its population of five million, has changed Peru and these changes are also its problems - because Lima is a problem difficult to unravel. What is a mega-city? Mega-cities are "cities that are expected to have populations of at least eight million inhabitants by the year 2000" (UNDIESA, 1986: iii). Figure 1.1 Latin America's giant cities Are mega-cities different from smaller cities? Source: White and Whitney, 1992:16. Job opportunities Food Water

Urban report: Brick and Gold. The Urbanism and Architecture of Informal Belgrade Text: Milica Topalović Photo: ETH Studio Basel & Bas Princen This text is an excerpt from an essay “Brick and Gold: The Urbanism and Architecture of Informal Belgrade” by Milica Topalović in Belgrade. Formal / Informal: A Research on Urban Transformation. The book was initiated in 2006 and produced by the ETH Studio Basel Contemporary City Institute and published in 2011 by Verlag Scheidegger & Spiess from Zürich. Periphery Streets are quiet, pedestrian friendly, and yet a pedestrian pavement is missing. Backbones The conceptual gulf between the unstable collectivism of the 1960’s and the ’70’s and the ethos of self realization of the 1990’s corresponds to a physical demarcating space that can be easily followed in Belgrade, even drawn as a map. Housing Redundancy is the basic attribute of informal housing. Public Throughout the era of wild expansion, a related “jungle” quality dominated the broadcasting and telecommunication sectors. Planning Legalization Efficiency Building Methaphor

Grey Street EOI: QATA X South Bank Corporation | qata.qld.edu.au South Bank Corporation has developed and approved a Grey Street Place Management Strategy to realise its goal of creating one of Brisbane’s great streets. As Grey Street is not the sole domain of the Corporation, it requires a place making approach to developing a self organising community for the future that actively participates in co-creating the street. South Bank wants to engage the many diverse communities who use the street to share in the shaping of an integrated design approach and participate in creating ideas for a shared future. To begin this process of change for the Grey Street, a shop front on Grey Street will operate for three months as a PLACE.Lab. It will be a tool for engaging discussion about the type of street that the community desires, and how the many diverse, and at times conflicting communities, can be involved in creating a meaningful place. School Design workshops Please contact Chetana Andary, Place Manager, for further information and email proposals to:

July 2011 The next essay in the Landscape Urbanism Reader, following 'Terra Fluxus' and the initial 'Reference Manifesto' is a longer essay by Waldheim exploring the idea that landscape is most suited to the modern metropolis, being "uniquely capable of responding to temporal change, transformation, adaptation, and succession... a medium uniquely suited to the open-endedness, indeterminacy, and change demanded by contemporary urban conditions." (39) This idea could be considered one of the formative structures on which landscape urbanism is built, explained by many writers as a response the failings of architecture and urban design to cope with the complexity of the urban situation, leading to Waldheim's apt, but somewhat hyperbolic statement that "the discourse surrounding landscape urbanism can be read as a disciplinary realignment in which landscape supplants architecture's historical role as the basic building block of urban design." (37) :: Lower Dons - River + City + Life by Stoss LU

Planning and Development - Brisbane City Council Welcome to Brisbane City Council’s PD Online, an online Planning and Development System containing the following services PD Online may be subject to intermittent lapses of the availability of the service. As a result, users seeking to view Development Applications may experience some delays during peak times. Should you experience any performance issues and you would like to make a submission (or feedback), please email your submission to Dalodgement@brisbane.qld.gov.au. Please ensure your email clearly identifies the development application to which the submission relates (with Council reference number and street address), and include the name and address of each person who is making the submission. Council apologises for the inconvenience this may cause you and is working to rectify this as a matter of priority. Check for Temporary Local Planning Instruments (TLPI)Property EnquiryApplication Tracking / Lodge a SubmissionInteractive MappingBrisbane Planning Scheme (City Plan) Enquiry

The four keys to urban expansion identified at the World Urban Forum At the World Urban Forum in Naples last week, both global urban policy and quantitative research efforts converged on a single conclusion: that the spatial planning of massive new urban expansion areas surrounding their cities is one of the most important things any government can do to make urbanisation sustainable. Some 8,000 registered participants and 16,000 exhibition visitors made their way to the World Urban Forum 6 in Naples last week, the flagship biennial event organised by UN-HABITAT. Round tables of ministers, mayors, parliamentarians and other leaders were convened, hundreds of discussions on everything from accelerating housing supply to slowing down cities were hosted, and thousands of chance encounters ensured an impossibly busy week for everyone. Much of the material presented was naturally very self-promotional, but a few strands of discussion stood out for us that we will share over the course of the week. The reality of falling densities