Bureau B+B. Interboro Partners. Lent Space is a privately-owned 0.5 acre development site that is temporarily being made open to the public. 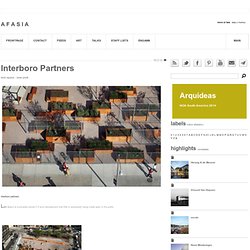 The space will serve as an exhibition space for large sculptures, an event space and public space as well as a tree nursery. When Lent Space closes, the trees grown on the site will migrate to the streets of the surrounding neighborhood, turning into street trees for the emerging Hudson Square BID. FF&FF. FF&FF | Franc Fernández, Fina Frontado . 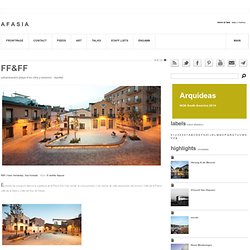 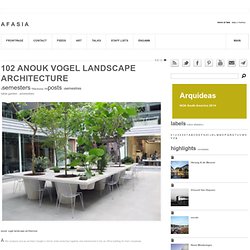 Amsterdam A film producer and an architect bought a former steel workshop together and transformed it into an office building for their companies. The building consists of two storeys surrounding an atrium. The outside world is brought inside through a large concrete table with integrated pots that simultaneously support the table top. TABLE GARDEN Realised in 2011 Located in Amsterdam, The Netherlands Commissioned by Lemming Film & Architectenbureau Paul de Ruiter In collaboration with Bart Guldemond. Mas Studio. Mas Studio This project was awarded first prize in the 2010 Architecture for Humanity Chicago Street Furniture competition. 01. 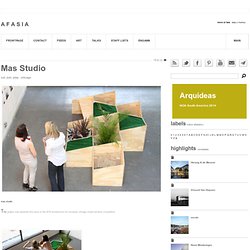 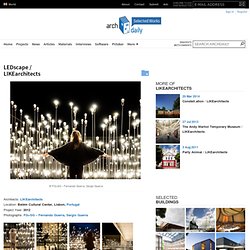 It is located in the “Centro Cultural de Belém” in Lisbon and aims to introduce the every day user to the LEDARE light bulb, thus demystifying the preconceived ideas about LED technology and emphasizing the relevance of this product in the sustainability of the future. Duecentosessanta MQ / Simone Bossi. Architects: Simone Bossi Location: 38056 Levico Terme Trentino, Italy Architect In Charge: Simone Bossi Project Area: 400.0 sqm Photographs: Courtesy of Simone Bossi In a little town in the north of Italy, close to the city of Trento, there is a private park close to a small lake. 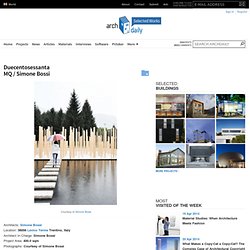 A worthless and unused tennis court was the reason for an international art competition called 260MQ organized by studio supergulp (firenze – italy)with the aim to achieve a new space quality. The work is a site specific pavillion that describes the surroundings, underlines the importance of the elements playing with, as light, water, stone, wood. AIDS Memorial Receives Approval / studio a+i.

Designing a memorial is a challenge of crafting a moment of pause – a slight change in one’s daily activity to experience a sense of place to respectively reflect and acknowledge. 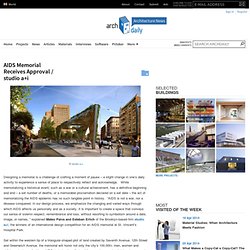 While memorializing a historical event, such as a war or a cultural achievement, has a definitive beginning and end – a set number of deaths, or a memorable proclamation declared on a set date – the act of memorializing the AIDS epidemic has no such tangible point in history. ”AIDS is not a war, nor a disease conquered. In our design process, we emphasize the changing and varied ways through which AIDS affects us personally and as a society. Diamond for Dementia / Haugen/Zohar Arkitekter. The project, Diamond for Dementia by Haugen/ Zohar Arkitekter, is a winning entry in a competition for upgrading an outdoor electrical supplier in a healthcare center for people suffering from dementia. 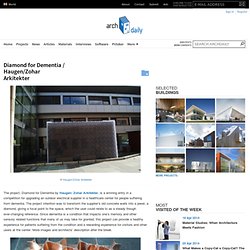 The project intention was to transform the supplier’s old concrete walls into a jewel, a diamond, giving a focal point to the space, which the user could relate to as a steady though ever-changing reference. Since dementia is a condition that impacts one’s memory and other sensory related functions that many of us may take for granted, this project can provide a healthy experience for patients suffering from the condition and a rewarding experience for visitors and other users at the center. More images and architects’ description after the break. Urban Umbrella / Young-Hwan Choi. Tired of scurrying under makeshift unpleasant scaffolding hovering over the streets of Manhattan? 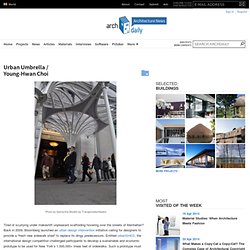 Back in 2009, Bloomberg launched an urban design intervention initiative calling for designers to provide a “fresh new sidewalk shed” to replace its dingy predecessors. Entitled urbanSHED, the international design competition challenged participants to develop a sustainable and economic prototype to be used for New York’s 1,000,000+ linear feet of sidewalks. Such a prototype must meet or exceed the City’s current safety requirements and regulations, and improve technical and structural performance. The winning shed was designed by Young-Hwan Choi, a student from the University of Pennsylvania. Leaf-Structured Canopy / SAM Architekten und Partner. Architects: SAM Architekten und Partner Location: Adliswil, Switzerland Photographs: Courtesy of SAM Architekten und Partner. 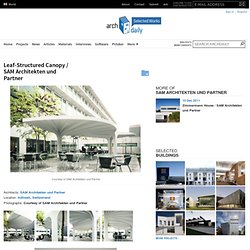 In reference to the festival’s theme of paradise, there are exposed the tree (of knowledge) as the central semiotic theme of the paradisiacal garden. Rather than reopening a way through the proverbial enclosures, the design team is interested in its manifold textures. From the single tree of knowledge they have gone to the many of the forest; from one truth to the plenitude of multimedia and the overwhelming world of information.

Books Bookmarks. Pylons of the future: Dancing with Nature / HDA. HDA’s construction technologies used for the arch of the Turin Olympic Footbridge (previously featured on AD), have been further refined for their most recent award winning competition proposal, entitled Pylons of the future: Dancing with Nature. The competition, held by Terna, a private national electricity provider, asked participants to design pylons of the highest technical and aesthetic quality with a minimal impact on the environment. HDA’s design response was based on transforming the current ‘industrial soldier’ image of today’s pylons into an elegant shape whose form was inspired by nature.

Fireplace for Children / Haugen/Zohar Arkitekter. Architect: Haugen/Zohar Arkitekter Location: Trondheim, Norway Client: Trondheim Municipality, Norway 3D consultancy: Scenario Architecture Rapid prototyping: Espen BÊrheim Contractor: Pan Landskap AS Project Year: 2009 Photograph: Jason Havneraas & Grethe Fredriksen The office was invited by the municipality of Trondheim to suggest an outdoor project for a kindergarten. Although the region is characterized by predominantly maritime climate and the weather varies considerably throughout the seasons, there is a popular saying ‘there is no such thing as bad weather only bad clothing,’ and all seasons are equally attractive to the Norwegian children that enjoy outside activities all year round.

Together with the standard playground facilities we wished to combine an enclosed space for fire, storytelling and playing. Given a very limited budget, reusing leftover materials (from a nearby construction site) was a starting point that led the design to be based on short wooden pieces. Led Action Façade, Digital Façade for Medialab Prado / Langarita Navarro Arquitectos. Architects: Langarita Navarro Arquitectos – María Langarita, Víctor Navarro Location: Medialab Prado, Madrid, Spain Collaborators: María Langarita, Víctor Navarro, Juan Palencia, Roberto Gonzalez Client: Area de las Artes, Ayuntamiento de Madrid General Contractor: Pecsa Teconsa U.T.E. Engineers: Mecanismo Lighting Consultant: Ca2l Project Area: 144 sqm Project Year: 2008 Construction Year: 2008-2009 Photographs: Miguel de Guzman The city is created under emergency conditions: On the one hand, the obligation to update its infrastructures and, on the other hand, the need to maintain the same standards as in other cities, both of which require the continuous incorporation of new technologies to public spaces.

If the now rare telephone booths were an example of this modernising in their day, today’s urban screens are so now. The Led Action Façade system is a model patented to produce large-format digital façades. Bridge From Recycled Grids / Aristide Antonas. Flying Walls / ateliermob. Children curiosity is the tool for a wider reflexion about different ways and velocities of interact and percept daily spaces, depending on our age, using one Portuguese traditional materiality applied to exterior doors to protect from sun and insects, usually rejected and depreciated by contemporary architecture. In the context of the Festival des Architectures Vives at Montpellier (18th-21st June), on the theme “Ephémères Curiosités”, ateliermob purposed to reinvent children’s universe on one antique mansion’s courtyard of Montpellier. An universe that can interact with children and provide them the sense of proportion and scale as long as the possibility to explore their curiosity, over and over, continuously searching for changes in the surrounding space through their own imagination.