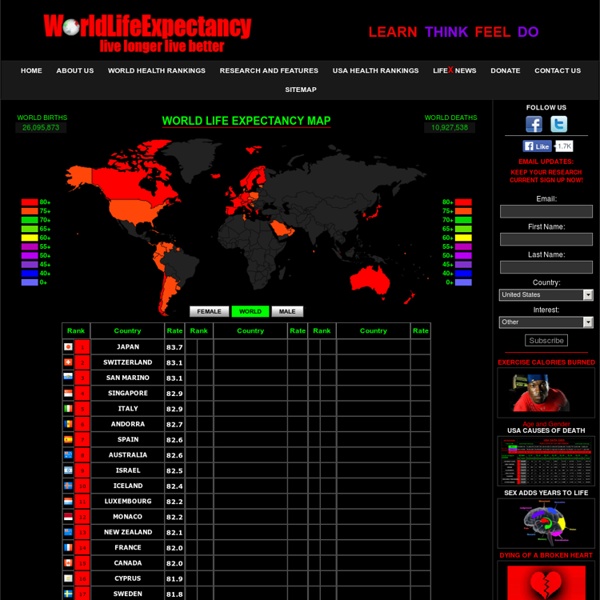 Life expectancy history: Public health and medical advances that lead to long lives. Photo courtesy of Kentucky Cabinet for Health and Family Services The most important difference between the world today and 150 years ago isn’t airplane flight or nuclear weapons or the Internet. It’s lifespan. We used to live 35 or 40 years on average in the United States, but now we live almost 80. We used to get one life. Laura Helmuth is Slate's science and health editor. You may well be living your second life already. Adrian’s lung spontaneously collapsed when he was 18.Becky had an ectopic pregnancy that caused massive internal bleeding.Carl had St. After a while, these not-dead-yet stories start to sound sort of absurd, like a giddy, hooray-for-modernity response to The Gashleycrumb Tinies. M is for Maud who was swept out to sea … then brought back to shore by a lifeguard and resuscitated by emergency medical technicians. O is for Olive run through with an awl … but saved during a four-hour emergency surgery to repair her collapsed lung. Now we’d like to hear your stories.

Interactive game of death in history: How would you have died in the past? Please read the rest of Laura Helmuth's series on longevity. The main reason life was so different 100, 200, or 300 years ago than it is today is that death was so different. People died young—in infancy or childhood, mostly—and they died miserably of communicable diseases. We barely remember the names of some of these diseases today, but they were once the most dreaded words in the English language: consumption (tuberculosis), pleurisy (swelling), putrid fever (typhus), quinsy (tonsillitis), and iliac passion (a particularly violent gastrointestinal disorder). Life expectancy has doubled in just the past several generations, and that’s largely because public health efforts and modern medicine have vanquished the diseases of the past. If you’ve ever fantasized about traveling back in time, this game is for you. Spin the wheel as many times as you like—you get infinite reincarnations.

Results of #NotDeadYet Twitter meme: 50 stories about saved lives. Photo by Comstock/Thinkstock Read the rest of Laura Helmuth's series on longevity. At the beginning of this series of stories about why lifespan has doubled in the past 150 years, we asked you to tell us why you’re not dead yet. We got hundreds of responses through email and Twitter (using the hashtag #NotDeadYet), and even more on Facebook and the comments sections of the story. Laura Helmuth is Slate's science and health editor. Follow The responses were fascinating. We also ran a survey with our partners at SurveyMonkey, who collected responses from 400 people using the SurveyMonkey Audience. Courtesy of SurveyMonkey Thanks very much to everyone who emailed or tweeted their stories. I'm #NotDeadYet despite pneumonia and chronic tonsillitis before I was 4. Roy: Almost every day I get out of bed with the thought that I am in life's bonus round. Rachel: When I was 7, I thought the best thing about being in the hospital was that they'd bring you ice cream whenever you asked for it. .

Maximum adult lifespan: Debate over how long humans can live. Photo by Melanie Stetson Freeman/Christian Science Monitor/Getty Images Read the rest of Laura Helmuth's series on longevity. There’s an oddly persistent myth that people have always had a good chance of living to a ripe old age if they could just survive childhood. Socrates was old, after all, and what about Ben Franklin? It’s true that infants and children were once more likely to die than people of any other ages. Why has life expectancy continued to go up steadily over the past several decades? Public health measures get the credit for most of the increase in life expectancy that happened from the mid-1800s to mid-1900s. If you look at the top causes of death in the United States in 1900 and 2010, you might think you’re examining data from two entirely different species. Heart disease isn’t a new invention. Because heart disease is such a killer, anything that reduces its incidence or treats it can save a lot of lives and boost our overall average life expectancy. So what’s next?